BUT, SHOULD I NOTE SOMEHOW when the day begins? Time is significant only in relationship to time. When we are awake in the night I want to speak of it. Sleepless gloss. Relate to me as x-2. You, y. Will a new structure [to] emerge? (I want grammar that interrogates and impels). The mother of young children has an imperfect sense of time and attends to other human tides,” wrote E.P. Thompson, showing what capitalism does to inward time. The structures of its apprehension.

At first, my time work has no apparatus. I follow the first break: sacred calendar date as organized fiction—biological, of course, but also affixed by culture to that certain number of weeks. I cried every day after that marked day until I got the baby out. Space-time fabric refigured as cliff shrouded in mist. You have to wait before you are allowed to jump.

In Yoko Ono’s “Fly,” the insect buzzes overhead, lands repeatedly on a woman’s naked body. What version of time is it in which we withstand? My daughter is almost four when we see “Fly”—the gallery showing three window-sized projections on a loop. She prefers the drama of “Cut Piece,” will not move on until it ends. Intuits that performance, like breakfast, has a set time, makes a narrative arc. But it begins again, rushing over us. Its human tide. We wait it out once more: increasingly bold audience, the artist’s discomfort. I repeatedly forget it is my job to anticipate, to announce time. The final go-round I stay tethered to the clock, steeled against absorption in art.

Winner of the 2018 Sawtooth Poetry Prize is American poet Stefania Heim’s second full-length collection, Hour Book (Boise ID: Ahsahta Press, 2019), a title that follows half a decade after her debut, A Table That Goes On for Miles (Switchback Books, 2014), a manuscript selected by Brenda Shaughnessy as winner of the Gatewood Prize. As she writes in her “Author Statement” included with the press release: “I am interested in the ways in which our experience of time is socially, culturally, and politically mediated, and yet constitute by terms we use as though they have transcendent meaning or inherent communicative currency.” Further in the same statement, she writes:

Another important resonance for the title is the medieval Book of Hours. A personal prayerbook for laypeople, the Book of Hours first appeared as an identifiable category in the 13th century and had extraordinary popularity across the various forms it took through the early 16th. Eight prayers dedicated to the Virgin Mary to recite at designated times. Books of Hours exemplify a relationship to time that is at once private (literally, what one does by herself in her room) and communal (other people are doing it in their room too). This sharing gets enacted through the structures of ritual. 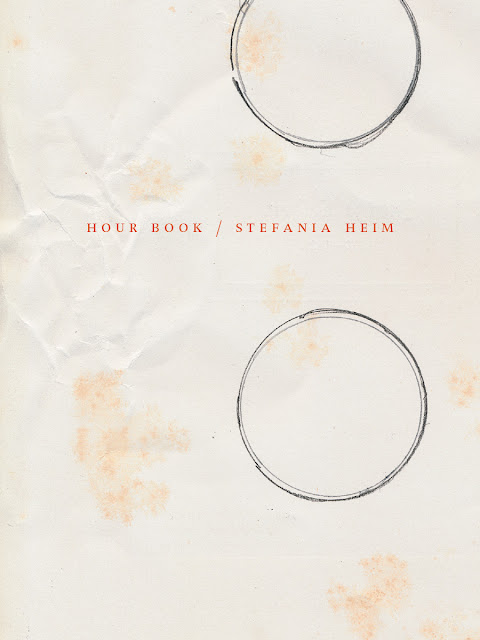 Heim’s collection serves as an interesting comparison to Cole Swensen’s own book around the medieval Book of Hours—Such Rich Hour (University of Iowa Press, 2001)—a collection more specifically influenced by the calendar illuminations from a particular medieval example, the Très Riches Heures, and how the illuminations and texts interact with history. While the conversations around time also exist in a more abstract realm, Heim’s poems are intimate, applying the structure of the Book of Hours to unpack her own domestic, as well as the impossibility of the movement of time when one has small children. As she writes in “1:51 PM”: “Everything will be pared / away” or the opening of “9:59 AM” that writes: “Sometimes. Over / time. Many times. / First time. Last time. / Longtime. Formative / time. Around / the time. Same time. / At times. All the / time.” Structurally, the poems point and counterpoint in interesting ways, with the sequence of poems titled with specific times broken occasionally by a kind of “Greek chorus” of prose pieces, threading their way through the manuscript to discuss the implications of time, and these moments, holding the manuscript together quite magnificently.

Considering the various technologies
by which a violence

bump bump.
They so gently bump.