Adam Sol, How A Poem Moves: A Field Guide for Readers of Poetry


Here’s something that makes me crazy: I know dozens of readers – smart, informed, enthusiastic readers of fiction and non-fiction of all kinds – who are afraid of poetry. Who fear they “don’t get it.” If you are one of those people, this book is for you.
I’m not going to try to make a case for why poetry matters. I’m going to just work from the assumption that poetry matters. It matters to me. It matters to the thirty-six poets included here. And it probably matters to you; if you don’t think poetry matters, you wouldn’t have bought or borrowed or stolen this book. So we’ll leave the generalizations about poetry to others. Ultimately I can’t say I get very excited about trying to define what poetry is. I’m more interested in what poetry can do. So while I’m not going to be afraid to get a little professorial if a term or technique needs some explanation or context, I’m going to do my very best to steer clear of big sweeping generalizations. (“INTRODUCTION”) 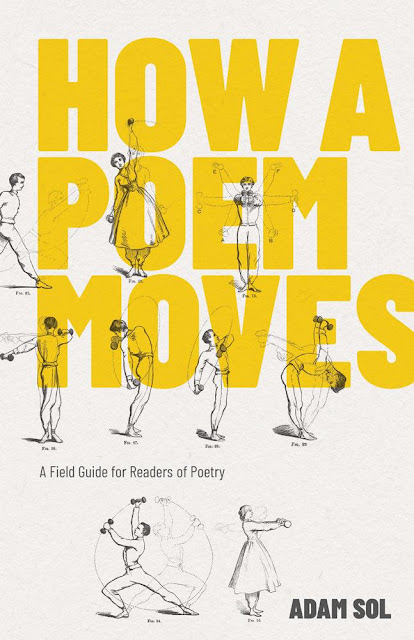 I’m rather impressed by Toronto poet Adam Sol’s How A Poem Moves: A Field Guide for Readers of Poetry (Toronto ON: ECW Press, 2019), a book that seems to have emerged rather organically out of his experience as a juror for the Griffin Poetry Prize for 2015. As he writes in his introduction: “As the process progressed, I kept thinking, How can I make use of all this good reading? How can I shed light on some of these other books that aren’t making it to the shortlists? There were terrific books that had to be put aside. Even uneven books often had stellar poems inside them. And I wanted to find a way to revisit them once the whirlwind of the jurying process was complete.” Sol’s response, then, was to start a blog around talking about individual poems, attempting to post a new essay every two weeks (I remember when the site began, and I was enthused and curious about it, although the distractions of young children prevented me from properly exploring the posts), and the thirty-five short essays included in this collection exist as a “best of” (a recent exploration of the site also reveals further activity, including a handful of guest-posts).

There is something delightfully casual about Sol’s observations, one that doesn’t sacrifice critical acumen or scholarly purpose, but one that can be enjoyed by both the casual reader and literary insider, and his list of subjects move outward from his own reading interest to the wider literary community, from clear literary heroes Philip Levine, Deborah Digges and C.K. Williams to the work of his friends and contemporaries, including Jeff Latosik, Ali Blythe, Donna Stonecipher, Bren Simmers, Shannon Maguire, Soraya Peerbaye and Liz Howard. The strength of the collection comes from his extensive knowledge, written in such a way as to allow everyone in, as in this excerpt from his essay on a poem by Toronto poet and editor Damian Rogers:

Despite what literary scholars and theorists have been telling us for decades, it’s still a common natural impulse when reading lyric poetry to look for the poet’s authentic experience in the subject matter. Knowing that Plath, Sexton, and Berryman all committed suicide adds a certain aura of authenticity to the anguish in their poems. But are poets under any obligation to deliver this kind of confession? Can we still be moved by a powerful poem about, say, a father’s death, if a poet writes while both his parents are living? Of course. And yet, we as readers still crave to connect a poem to the poet’s biography.

I’ve long wondered why more writers don’t write non-fiction pieces and/or reviews, even if casually, given the presumption that if you write, you will be naturally contemplating how other works are composed, and their structures. I am grateful for this, and am even considering picking up a couple of extra copies, perhaps for mother-in-law; perhaps for my bookish niece (and it was nice to see a couple of essays exploring the work of poets whose work I am rather fond of, including Shannon Maguire, Donna Stonecipher and Liz Howard). I just hope he considers continuing the series, even if as only an occasional one.

The biggest hurdle, one could argue, for contemporary poetry is an ongoing resistance by the general public (one that has to do, in no small part, with public school educations, I might think), and I suspect that anyone willing to attempt Sol’s essays would easily be able to begin to engage with what had previously eluded.