This room has
only the rhythm of

flesh turned on
too soon. Someone’s
laughter sunsets behind

floes. Deep in
my nervous system
a sky fills

Upon opening Georgia writer Magdalena Zurawski’s second poetry title (and third published book, after her novel), The Tiniest Muzzle Sings Songs of Freedom (Seattle WA/New York NY: Wave Books, 2019), I was immediately struck by the final stanza of the opening poem, “OF LIBERATION,” that reads:

“To be in a sentence,”
he asserts, “is by
nature to be passing through.”

I mean, just: wow. Simply through three short lines, she manages understatement, abstract and literal punch. In a recent interview at Bayou magazine, conducted by Ross Nervig, they discuss this poem:

You begin The Tiniest Muzzle Sings Songs of Freedom with the line: “You arrive in a sentence / where you would like to stay…” what sentences have you arrived in where you’d like to stay? The poem ends with a professor stating that to be in a sentence is to be only “passing through.” What makes a sentence habitable?

I would argue that no sentence is habitable in that one can only apprehend a sentence as it unfolds in time. To be in a sentence is to experience its beginning, middle, and end, but never the three simultaneously, only sequentially. The act of experiencing a sentence requires the reader’s eventual exit from it. This part of the poem is turning a fact about the nature of reading, of experiencing writing, into a kind of existential statement. It conflates reading with life because life, too, is time-based. If I like this moment, I can’t stay in it. None of this is really any different than Heraclitus’ “You can’t step into the same river twice,” just a bit more angsty in its presentation.

I wrote this poem in motel in Paducah, Kentucky. I was driving back home alone to Athens, GA from Kansas where I had just spent a week with my friend, the poet and writer Anne Boyer. She was going through very serious cancer treatment and the visit was intense. I had driven all day and had to find a place to spend the night, and I pulled into a motel parking lot in Paducah. There were two young, brawny guys drinking beer outdoors on the second floor of the motel just above where I parked. I was trying to get a sense of whether I would be safe—I was a woman traveling alone. It was dark, and so I listened to them talk for a few minutes as I sat in my car. What I overheard was one man encouraging the other. It seemed that they were both veterans. One had just survived some serious surgery, and his friend was trying to build him up. The one was telling the other how amazing it was that he survived and how good he looked now. It was beautiful and depressing all at the same time. Two young guys trying to help each other survive a war that most of us don’t ever have to think about. It of course echoed the situation I had just left, seeing my relatively young friend suffering through both cancer and the cancer treatment. 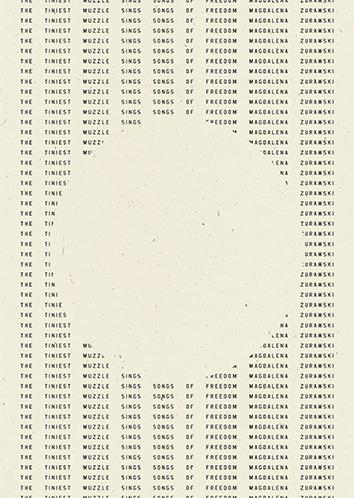 Throughout this collection, a follow-up to her award-winning debut, COMPANION ANIMAL (Litmus Press, 2015), Zurawksi’s poems engage both a thoughtful, exploratory meandering and such a willful precision, enough that any line or thought might slice a reader in two. She utilizes abstracts to speak truth, and lyric language to both capture and evade an incredibly precise sequence of meanings. There is such density to her poems, and some pieces, through their use of short phrase/lines, are reminiscent of recent work by Chad Sweeney [see my review of his latest here] or even the recent debuts by Cameron Anstee [see my review of such here] and Jack Davis [see my review of such here]. I’m thinking, specifically, of her three-page poem “THIS ONE HYDRA,” a poem dedicated to Fred Moten and Laura Harris, that ends with:

As for the future
I will refrain
from the indoors

from living upon
floorboards and
stairs where long

before I was born
I was meant to expire.

The Tiniest Muzzle Sings Songs of Freedom is a book of poems that utilize language to explore thought, philosophy, meaning, abstract ideas and real events, and an anxiety in the Age of Trump, composed via collision, precision and the space of breath. Her gaze exists on the smallest moments, capable of seeing the big picture. “The poem is a pair of eyes / moving a nose / down a page,” she writes, to open the poem “NATURAL SKIN.” Her engagement with the world, history, writing and language is legion, large and interconnected, and one can easily see the influence from Robin Blaser, especially, in a poem dedicated to him and Robert Duncan, “THE REMAINDERS,” that includes: