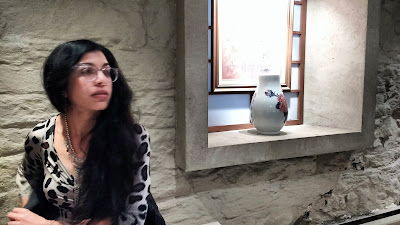 Nicole Raziya Fong is a writer living in Montréal. Her work seeks to delimit and re-construct immaterial ampules of psychic experience, coaxing the incorporeal into inhabiting a more muscular physique. Her chapbook, Fargone (2014), was published as part of the Poetry Will Be Made By All project. Past work has appeared in publications including Cordite, Poetry is Dead, and The Volta. PEЯFACT (Talonbooks, 2019) is her first book.

PEЯFACT feels like a sentient being that grew in confidence and complexity alongside me. I began writing the book when I was 24— so six years have passed since its initial manifestation. Having had that amount of time to write, live, read, all while being given so much support and encouragement, has really transformed how I conceptualize the book as a vehicle of thought, sociality and concurrence.

PEЯFACT bookends a period of intense growth but also significant loss; a kind of beacon whose gaze directs itself both into the future and past.

It’s kind of embarrassing, but as a teenager I was really into these horrible goth-pop bands that wrote these vaguely symbolist lyrics. From there, I just found I was able to write more comfortably in a poetic mode, or rather that everything I wrote was being classified as such by other people.

I do feel that poetry can approach an authenticity which can’t be expressed adequately through non-poetic forms of writing, is able to interact with certain modes of thought and experience without necessarily needing to name & excavate it in the ultimate goal of using language to contain it. That feels like a colonial impulse to me which I fully reject. Poetry as maintaining the secrecy of things while also making it extant to others. Poetry can exist across forms, too, which is a kind of mutability catering well to the trajectories of my thinking.

Writing happens quickly, usually out of the blue, usually at some point in spring or summer. A sudden thaw. Throughout the year I’m constantly writing thoughts, patterns and so on in a notebook, so when I’m finally able to bring it all into writing, most of it happens within the span of a month. I will then have a rough draft of a manuscript that I’ll then work on and put aside intermittently for as long as I need to.

I find that the writing I do these days takes the form of a long poem or series, each of which cater well to the eventual formation of a book or cohesive project. I never seem to write individual poems that stand on their own, if I do, they’re usually not very good. I feel that the concepts I’m trying to explore in writing need a much larger and forgiving vessel than that.

Public readings don’t have much to do with my creative process. They’ve been a way for my work exist in a sphere that I, personally, really don’t feel comfortable in, but has been super necessary in forming a sense of community— through readings I’ve been able to meet some of my now-closest friends and contemporaries. I don’t think I enjoy readings, but I don’t feel as much dread and anxiety towards them as I used to.

My concerns right now are essentially phenomenological in nature. “Coaxing the incorporeal into inhabiting a more muscular physique”— I feel that in a very basic sense this is an apt description of the process required in recreating a self that been disassembled and dispersed by trauma, of re-peopling identity in the midst of previously unbodied experience, giving form to a self which can bring itself back from the past, giving it a new place to land.

Writers should be exiled from the city!

But really, I feel that if there is any role that a writer should have in this culture at large, it would be to undermine it, or provide some kind of guidance into how another society might be created. By guidance I don’t mean a kind of didactic interchange (though it could be, Brecht’s learning plays did this very well and have been so important to my own re-situation of myself as a mixed race, queer woman existing in a capitalist, imperialist context), but also a sort of guidance which might just be a being-alongside, a concurrent thread of thinking and feeling which might converge into a larger, more compassionate mode of existing; a means to survive this world.

PEЯFACT was edited by Donato Mancini and it was really the first time anyone had put so much critical consideration into my work. His input was so vital to the book’s progression, and I think through the process I also discovered how to conceptualize the “Book” as more than a fragmentary collection of possibilities and rather as a cohesive acting.

I wake up, make coffee, read, then start writing. Monetary work, eating, living and so on occurs in between.

I usually can’t write freely unless I’m reading other people. But it’s impossible to always be concurrently reading work that has great importance to your own practice, those moments are rare, actually, and rarer the more I read and the older I become.

I don’t feel I have any control over the source of my inspiration and I don’t really know where it comes from. When writing becomes stalled, there’s little I can do to get it going again. During those times I can turn to other things in my life, which is a relief for a while, then a source of difficulty, then a source of pain. At which point I am usually become able to write again.

Home is a fraught concept. I’m reminded of places where I’ve felt safe and encompassed when I encounter the smell of sandalwood, dry & sun-bleached pine, fish frying in oil & the papery scent of expired Revlon lipstick.

So many people have been important to my thinking and humanity. I’m surrounded by so many wonderful artists and writers in Montréal — Nora Collen Fulton, Michael Nardone, Erín Moure, Laura Broadbent, Kaie Kellough, Helen Guri, Stephanie Creaghan, Erin Robinsong and also a gazillion others!

My work has been deeply affected by the writings of Aimé Césaire, Lisa Robertson, Hannah Weiner & the theatrical concerns of Antonin Artaud & Bertolt Brecht.

My thinking & conceptualization of myself as a subject has been deeply complicated and touched by the work of Fred Moten, Saidiya Hartman and M. Nourbese Philip.

I also would like to be able to deadlift 300lbs.

I wish I could have been an Olympic athlete, or a marine biologist, or a glass-blower.

But, I mean, writing isn’t my sole occupation. I edit subtitles for film and television right now while also selling vintage clothing online. It would be nice if writing could become my sole occupation, honestly.

Writing (and reading) used to be the only thing that provided a way out of my lived experience, which was often intolerable and overwhelming. I think I used writing as a way to survive in a very real way. I still do, but not in the same sense. I think that if I were unable to write, I would become tangled in myself and perish very quickly.

Right now, Midwinter Day by Bernadette Mayer. It’s taking me a long time to read because I need to take a few days between each section to process and breathe.

Posted by rob mclennan at 8:31 AM
Labels: 12 or 20 questions, Nicole Raziya Fong, Talonbooks