pointed to the same confusion. On the second Monday the third person persevered. Tiny toes like exclamation points, daffodils, or doubts. While the mistress of ceremonies sobbed off the opportunity to introduce her own death. Chanting, mutinous, the girls in our hearts danced on pins & needles, stalking expired goals. Souled like dreaming dogs: backwards sever, forward fever. Naysayers said their. Bed-layers lied. Mixed wintry standards dropped precipitously on the embryonic future poking its head from the earth’s gut, while the spicy amongst us inverted our convolutions to the nth degree. Out-rhymed, intellect ceded the probabilistic navigation to instinct & its moody henchmen. Lolling yet again on shaky ground, the middle deliquesced to flab & folded. 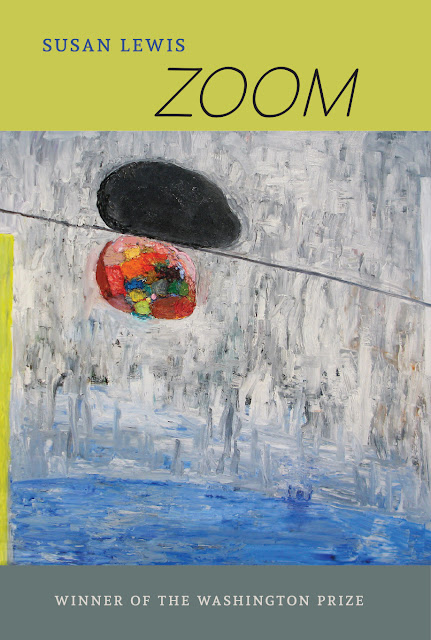 As I published one of the poems from this manuscript in the “Tuesday poem” series at dusie, I was curious to see how the full-length collection, New York City poet Susan Lewis’s latest, ZOOM (Washington DC: The Word Works, 2018), would turn out. Winner of the Washington Prize, and her tenth title and fourth full-length poetry title to date, ZOOM is constructed as a suite of stand-alone prose poem squares organized in three sections, titled in reverse numerical order: “3rd,” “2nd” and “1st.” Through fifty-six single-stanza poems, the title seems to suggest the speed of her lyric, as each poem is produced in a sweeping, stream-of-consciousness rush. Her poems each exist as a singular, ongoing thought, contained in the lyric until it runs out of breath (I would be curious to hear how she might read such aloud), but cohere as a unit through their structural and tonal echoes, some of which I found a bit too similar, at times. Still, the poems in ZOOM explore anxiety around contemporary conditions, from a crumbling infrastructure, political hackery and climate collapse, and the speed at which everything seems to be closing in on a potential end. In a recent interview around the collection for The Friday Influence, conducted by José Angel Araguz, she responds:

The origins of this collection go back to my years-long interest in the prose poem, combined with another interest of mine, which happened to develop at the same time: in poetry as play – which is not, in my mind, inconsistent with addressing dark or serious concerns. One of the things I find interesting is how much play the prose poem allows! I’m drawn to the paradox of this form: poetry that is not lineated, that is, does not advertise itself as poetry. I love the tension this holds – the demand that the reader look beyond the obvious, and engage with what might make poetry be poetry. (A question I think is more important than any particular answer one might suggest). Writing prose poems has only deepened my love for the form: the concentrated punch of a discrete bloc of words floating in a white page; the implication that substantial things come in small packages; the impression these blocs give, of density and compression; the focused attention they ask of the reader.

However, I did not set out, ab initio, to write a book-length project, or suite. It was interesting: after writing some number of what I thought of as free-standing poems, their common concerns started to become apparent, and began guiding the development and features of the rest of the poems in the book. Some of these preoccupations are packed into the title, with its nod towards film technique, as well as velocity. Organized around the substantive and aesthetic potency of point of view, the poems in Zoom borrow from film technique to ‘zoom in’ from the objective/long shot/third person, to the medium shot/second person, to the subjective/close up/first person. All engage the ramifications of subjectivity via bricolage, parataxis, polysemy, and compression. I think of the collection as adding up to a kind of status report for our moment in this world, in which the frame narrows along with the point of view, from the global to the local to the individual. Especially concerned with the need for, and failure of, empathy and decency, as well as with how we perceive and communicate, these poems also amount to a progress report on the state of language itself. The consensus among these poems is that we’re zooming – if not to our doom, than to the brink, where we might still be able to stop ourselves from irreparably despoiling our psyches and our planet.

Posted by rob mclennan at 8:31 AM
Labels: Susan Lewis, The Word Works