I used the biggest words I could think of and spoke with an exaggerated Finnish accent. I cooked only foods requiring the most foul-smelling spices and watched only movies based on funeral processions. I smoked filterless cigarettes rolled by Guatemalan resistance fighters. I puffed out my chest and sucked in my ears. Have you ever had your fingers surgically transformed into suction cups and then walked across the ceiling of the Sistine Chapel? Do it all you want: see if she cares. It’s true I don’t know what a Finnish accent sounds like. I straighten my hair and I curl it. I lift several pounds above my head and breathe heavily. Finland is famous for its— Oh, I forgot what I was going to tell you. It is difficult to braid one’s toes evenly. My heart is fulsome, like a successful harvest. She has, however, asked me to avoid similes. Do you know how many small dogs you can fit in a copy of A Tree Grows in Brooklyn? Do you know where I buried my lunch? Here is a fact about me: 1983 Finnish fencing champion with 20/20 vision. I squirted ketchup on an original Picasso. Or perhaps I tackled the man who squirted ketchup on an original Picasso. Choose whichever you prefer. I wear my glasses on my sleeve. Look! Now she is picnicking with creatures of the forest.

The author of dozens of chapbooks of poetry and fiction, and nearly twenty full-length books of fiction, poetry and essays, Cobourg, Ontario writer, editor, publisher and blogger Stuart Ross’ latest full-length title is the poetry collection Motel of the Opposable Thumbs (Vancouver BC: Anvil Press, 2019), his eleventh full-length poetry title to date. 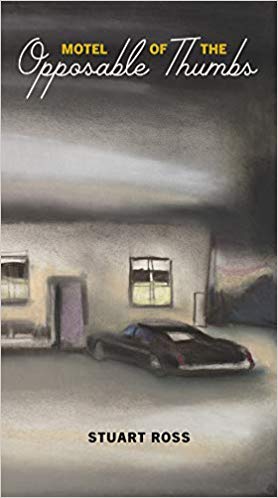 Motel of the Opposable Thumbs includes a number of elements those familiar with Ross’ work will find familiar, including threads of surreal and absurd humour, and poems for or around those important to him, from friends to literary influences (many of whom included in this collection are both), as well as the seamless and surreal transitions from the ridiculous to the sublime, from the throwaway gag to the deeply earnest. Motel of the Opposable Thumbs, for example, is set in five sections, all of which include musical subtitles, as a curious structure that is acknowledged at the back of the collection, as he writes:

This book is loosely structured after Bela Bartók’s String Quartet #4. I think I was only kidding about that when I included it in my notes for the sales force and promptly forgot I’d ever said it. Then it started appearing in online descriptions of this book and I figured I’d better give it a go. I hope someday to structure a book after Slothrust’s 2014 album Of Course You Do and another after Nick Lowe’s haircut.

The evolution of his last few poetry collections has been interesting to watch. A Hamburger in a Gallery (Montreal QC: DC Books, 2015) [see my review of such here], which appeared two prior to this current collection, is a poetry collection of more than one hundred pages of shorter lyrics and lyric sequences, as well as a small handful of his ongoing ‘one-line’ poems. A Hamburger in a Gallery was composed, Ross has said, both concurrently and as a counter-point to his subsequent title, A Sparrow Came Down Resplendent (Hamilton ON: Wolsak & Wynn, 2016) [see my review of such here], as well as an attempt for a more “mainstream” poetry title. Around the time that A Sparrow Came Down Resplendent was released, he wrote on his blog that “While [editor] Jason [Camlot] and I were putting together Hamburger, which contains scores of personal poetic experiments, I was building a file of my most accessible, narrative, straightforward, personal poems for the subsequent book.”

While Ross’ work has always included self-depreciating element and a strange humour, there is a darkness that emerges from the lyrics of Motel of the Opposable Thumbs that hasn’t felt so prevalent before. Given the current political and social climate, much of which Ross absorbs and responds to, even if in the most allusive and elusive ways, I almost wonder if the world has simply caught up to a darkness that has always been present in Ross’ work. Perhaps he might be one of the few contemporary poets articulate and aware enough to be able to speak to and around a larger, twisted and ongoing agitation, one that can’t even properly be described, but instead, deeply felt. As the poem “3” reads:

I was going to write a poem about three things.

I forgot what they were.

An ice cube fell out of the freezer and slid across the floor.

My dog ate it.

I am avoiding talking about something.

In an unfinished interview I conducted with Stuart Ross in 2008, he said:

The political is part of my life; aren’t we all somehow political, if not just in our personal actions and choices? Sometimes I’m more overt, such as when I have written, especially in my fiction, about revolution or poverty in Central America, or about Ronald Reagan and George W. Bush, but I think perhaps, not by design, much of my writing is a response to or critique of capitalism: I’m thinking right now of my chapter in the anthology The Closets of Time (The Mercury Press), which also appears as a stand-alone story in Buying Cigarettes for the Dog: it’s about a landscape where shopping carts roam and rule: people are like the stray dogs of that world. I didn’t intend it when I wrote the thing, but it occurs to me now that that story is about the ultimate triumph of capitalist materialism.

Over his four decades of publishing, Ross has emerged as the torch bearer for what has been loosely coined as “Canadian surrealism,” leading an informal group of poets and fiction writers that first congregated in and around Toronto in the late 1970s and into the 80s—Gary Barwin, Lillian Necakov, Gil Adamson, Kevin Connolly, Steve Venright, Mark Laba, Alice Burdick and Daniel f.Bradley—all of whom Ross later included in the anthology Surreal Estate: 13 Canadian poets under the influence (Toronto ON: The Mercury Press, 2007). And Ross has always been forthcoming with his influences and literary connections, and this collection is no different, including poems for and/or after a multitude of poets—Dag T. Straumsvåg, John Ashbery, Steve Venright, Kate Sutherland, Alice Notley, Phil Hall, Nicholas Power, Ron Padgett, Barbara Guest, Mary Ruefle, Michael Dennis, Nelson Ball, Larry Fagin and Joe Brainard—and yet, as a longtime reader of Ross’ work, I was particularly interested in the thread of short poems that run through the collection, his “POEM BEGINNING WITH A LINE BY” poems, a structure that plays off a particular line by another writer, even if not playing with, around or through that particular author’s work, including pieces beginning with lines by Dean Young, Sarah Manguso and Kimiko Hahn. The poems suggest less a matter of influence, but a way to open up his writing further by including a variety of elements from his reading; jumping off a line into territory that might not have been possible otherwise.

POEM BEGINNING WITH A LINE BY
KIMIKO HAHN

She became a sink.
She painted a black line
around herself
on the wall
behind herself.
At night,
she snuck into
an art gallery,
dragging the wall
with her.
A man with a moustache
shot a bicycle.
Everyone in the elevator
was naked.
I adjust.

Really, his adherence to what might be seen as name-dropping is anything but that, and I would argue that the inclusion of his friends, mentors and peers are an important part of Ross’ approach, one that inherently ties writing directly to community (with a writing life that also includes editing, publishing, chapbooks, reviewing, blogging and having co-founded The Toronto Small Press fair in the late 1980s and the Meet the Presses Collective), and a writing that wouldn’t be possible without those ties. These names are important for how he approaches and even values writing: not as commodity but as a part of a much wider and far-reaching community of writers across Canada and beyond. For readers outside Canada, for example, not yet aware of Ross’ work or his community of peers there is quite an opportunity: to begin to read the poetry of Stuart Ross is to become aware, also, of the work of Nelson Ball, of Alice Burdick, of Gary Barwin and Mark Laba, and of so many others that have lent their attention, their work and their energies to sustaining and being sustained by a wide array of writers and work. And Stuart Ross, as well.