Haze settles in rooftops,
red tile above
the midwifery center.
Outside, topiary like
lime-green popsicles
before summer
uncouples sweet
from stick. Some local
parade passes
the hillside’s jagged
tombstones. No, these
are teeth, clenched,
and we are driving over water,
grip on the hanging strap
when it seems we might tip.
What else am I doing?
What am I pretending
To do while doing it? (“AURORA”)

Seattle poet Bill Carty’s full-length debut is Huge Cloudy (Portland OR: Octopus Books, 2019), a collection of narrative twists and jolts, shifting perspectives and unexpected takes. Carty jostles the familiar and unfamiliar alike in such subtle, jarring ways, opening the question of whether whatever we thought was true or real might ever have been in the first place. “The car interior was esophageal red,” he writes, in the second stanza to the poem “OCEAN, THE GREAT CONDUCTOR,” “and in the headlight, my dancing / was a reenactment of my deep shame of dancing.” The third stanza in the quartet reads:

We had no governor, only the moon
making a smaller moon
on the car hood. 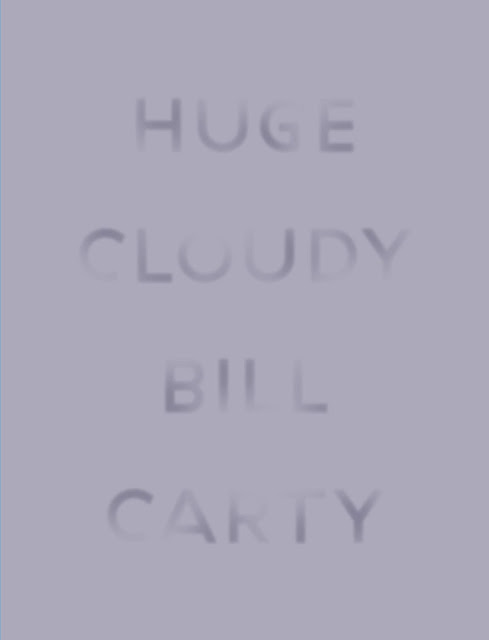 There is a sweetness to these poems, and a vulnerability, one that displays itself slowly, carefully and openly. The strengths of this collection are so wonderfully understated, allowing for wisdoms and shifts to simply float up to the surface when needed. “I arrive at, thinking,” he writes, to end the poem “NOT A MOAT,” “this really is despair, // so much broader than it is long.” Set in five sections of short lyric poems with an opening piece, Carty’s Huge Cloudy intersperces two sections of longer sequences—two and four—for the sake of stretching out, even accumulating, the narrative thinking within his short lyrics: the poems “AURORA” and “BOUNDING SPHERE,” respectively. Even the fact that the sections are numbered, where two and four are clearly each made up of a single poem each, seems understated, allowing the poem itself to reveal, and unfold. I appreciate that impulse to not wish to highlight what could only be understood, and appreciated, through examination.