the sun came out at night
to go for a stroll and the divine crossed
the room. the windows
opened

writing comes from a dialogue
with time; it’s made
of a mirror in which thought
is stripped and no longer knows
itself

in Palermo men are as
strictly trained as horses; or
else they have the shining violence of
flowers (“At 2 p.m. in the Afternoon”)

The latest poetry title by Etel Adnan to appear in English translation is TIME (New York NY: Nightboat Books, 2019), translated from the French by Sarah Riggs. TIME is constructed out of six extended lyric sequences—“October 27, 2003,” “Friday, March 25th at 4pm,” “At 2 p.m. in the Afternoon,” Return from London,” “No Sky” and “Ballbeck”—each of which are clearly situated, whether in a particular time or place (or both), tethered to the ground so the abstract of her lyric thinking won’t float away completely. The poems are situated very specifically, but are open enough to include everything; rooted in place, as she writes in the first sequence: “those who cannot leave / discover the geography / of the body. there are also airfields / and harbors on the surface of our souls.” Adnan’s sequences explore violence, culture, power and memory, composing small abstract moments that accumulate in a way that echoes for anyone even faintly familiar with contemporary French writing, but in a way that also reminds me of the work of the late Canadian poet D.G. Jones, another poet who stretched out the sequence from accumulated small abstracts (and a poet who was also influenced by French writing, although through his translations of the work of the late Quebec poet Anne Hébert, a writer born a decade earlier than Adnan).

it’s more bearable to think of
death than of love

Greek thought explored
all things the way it
explored the islands

when men no longer have
power over women, over whom
will they have it? (“At 2 p.m. in the Afternoon”) 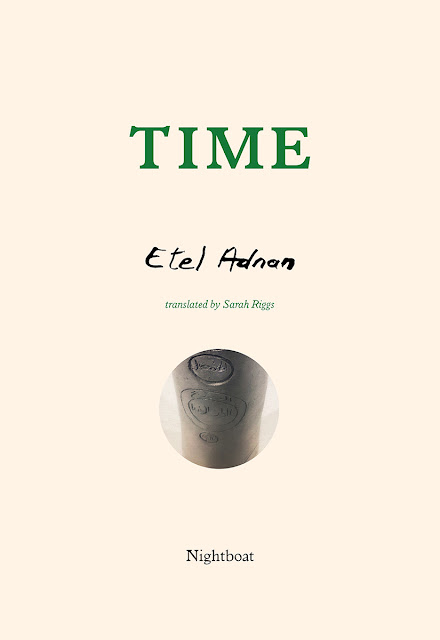 In her “Translator’s Note,” Brooklyn, New York poet and translator Sarah Riggs writes “I recall Cole Swensen saying how to translate means you feel the other under your own skin. And, I would add, under and into your own writing.” She begins her note:

The postcard is a medium Etel Adnan loves, and often when translating this work I felt echoes of the circumstances in which it began. On October 27, 2003, Etel received a postcard at her home in Paris from her friend, Khaled Najar, the Tunisian poet and publisher of Tawbad Editions. Spontaneously she wrote the first of the poem sequences in this book, each poem a breath or two, thinking of Khaled. In this way the poems act like a correspondence, a poetry of the postcard, from one Arab writer to another.

The translator occupies the recto-verso position of not being able to be fully on both side, having to choose one language while thinking deeply of the other language, and of a third address which is the person or people “out there.” As a poet and translator of poetry in French, I found myself in the autumn of 2005 at a café in Paris reading Le 27 Octobre 2003, and wanting to translate it. So I asked Etel if she was going to write/translate it also in English. Etel responded very simply and enthusiastically as is her way, “I’d rather you did it.”

At first it felt like pouring water from one pitcher to another, to translate these poems, so clear and lucid and succinctly chosen was each word. One short poem on each page, with Khaled’s facing page translation in Arabic, gave me lots of room to ruminate on which words to choose. Part of the passion of translating a first draft as I scrawl it into the book in pencil is partly that I can be anywhere. It had the pleasure of the postcard—writing vicariously to Khaled, writing as if you are Etel, writing to you who are readers in English; so many sides, positions, and dimensions. I was on a rooftop in Morocco when I first translated the little volume of No Sky, and can remember the cloud formations of that day.

There is a lot happening in these meditative postcards, from bombs dropping in Beruit to a return to Greece, sculptures or stripmining in California, composing a sequence of lyric sketches aware of and very concerned with how easily humanity turns against itself and its own interests, from the larger issues of planetary survival, to the intimate matters of how one person treats another. “this morning I killed a fly,” she writes, in “No Sky,” “had I been a State / I would have destroyed a city [.]” Yet her poems are filled with such a wonder and an openness, one that shows a wisdom, and, despite everything, an optimism and heart.

What is interesting, also, is that this translation also counts as the first publication of these sequences as a unit, making one wonder who made the choice for putting such together as a full-length collection and in what order. The acknowledgements at the opening of the collection offer that the first five sections were each originally published in French by Tawbad, in 2008, 2007, 2010, 2010 and 2008. At the end of her note, Riggs offers that “Etel and I together named the book,” although that doesn’t entirely answer the question.