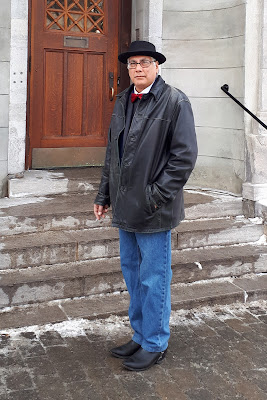 David Groulx lives in Vanier, Ontario. His poetry has appeared in over 160 publications in 16 countries. He is the author of numerous books of poetry including From Turtle Island to Gaza (Athabasca University Press 2019) Wabigoon River Poems (Kegedonce 2015) and The Windigo Chronicles (BookLand Press 2016). His work has appeared most recently in Contemporary Verse 2, Transmotion, The Muse, Rabbit: A Journal for Non-Fiction Poetry, and The Stonecoast Review.

1 - How did your first book change your life? How does your most recent work compare to your previous? How does it feel different?
Funny thing about my first book, Night in the Exude, (Tyro Books), which was self published over 20 years ago, someone recently asked if I had any copies left. I did not but someone sent me a copy from Edmonton, which was found in Thunder Bay. I suppose that book is as well worn as I am. Did it change my life? Not really, except that it almost ended it in 1997 as I was speeding down a four-lane highway to make my first sale. Needless to say, money and book exchanged hands at in excess of 100 km/hr and all worked out well.

2 - How did you come to poetry first, as opposed to, say, fiction or non-fiction?
I began writing fiction. I remember my grade three teacher ordering us to write a story about something that bothered us and what bothered me was the TV series Little House on the Prairie, so I wrote a story about how all the characters became involved in a terrible wagon crash, the story being dark humour and irony. After the assignment was handed in, the teacher called me to his desk. I suspected I was being sent to the principal’s office again as I wasn’t a very compliant student. The teacher asked me to read the story to the class. I was used to being singled out, but that was usually for punishment. This time I had the students rolling over laughing as well as the teacher. Poetry came later mostly through listening to Heavy Metal of the 80’s like Xanadu by Rush and Rime of an Ancient Mariner by Iron Maiden.

3 - How long does it take to start any particular writing project? Does your writing initially come quickly, or is it a slow process? Do first drafts appear looking close to their final shape, or does your work come out of copious notes?
Some books come quickly, like The Windigo Chronicles (BookLand Press) and Wabigoon River Poems (Kegedonce Press), which were probably written in a month each. From Turtle Island to Gaza (Athabasca University Press) sat on the self for almost three years. I think the time it takes has to do with how strongly I feel about the subject matter and the amount of time I actually have to write. These days I only have weekends to write as work takes up the rest of the week. And then there’s A Difficult Beauty (Wolsak & Wynn). The manuscript was actually lost and I had forgotten about it and then about 10 years later, a very good friend from Winnipeg sent me the manuscript I had given her. I thought it required a little work and it was published, a little late but better than never.

4 - Where does a poem usually begin for you? Are you an author of short pieces that end up combining into a larger project, or are you working on a "book" from the very beginning?
I used to be a writer of shorter poems, but as I grow . . . hmmm . . . older, I find myself wanting to explore a subject longer and more in depth—like as a man gets older he wants to spend more time making love to a woman, the race to a momentary climax is gone. You know the old story about a young bull and an old bull standing on a hill over a field of cows and the young bull says, “Lets run down the hill and fuck one of those cows.” And the old bull says, “Lets walk down and fuck them all.” Well, I find it’s that way with poetry.

5 - Are public readings part of or counter to your creative process? Are you the sort of writer who enjoys doing readings?
I have a kind of love/hate for readings. I mean, I love meeting people and I am humbled when people come to listen to me, as well as surprised. But I find I get very tired very quickly although I do enjoy it. I find the feeling of enjoyment becomes a feeling of anxiety and exhaustion. It’s the writing I find satisfying, when it works. As a reader you want to be good and your work to be heard and that is a most difficult thing.

6 - Do you have any theoretical concerns behind your writing? What kinds of questions are you trying to answer with your work? What do you even think the current questions are?
I want to expose a truth. To reveal what it is to be human, to find meaning to life through writing poetry; if that is even possible would be the other question. Those things that wake you in the night and rouse you to write.

7 – What do you see the current role of the writer being in larger culture? Does s/he even have one? What do you think the role of the writer should be?
I hate it when people say our role is to observe and record, although that is perhaps what we do. I don’t want to recognize it. My role is of a human being who is included with friends, family, and society. I am not standing apart from it like some hermit commenting on this or that. I write what I write because that is what I feel most strongly about at that time. If others accept it or deny it, it only really matters to me.

8 - Do you find the process of working with an outside editor difficult or essential (or both)?
I find working with any editor difficult, but often necessary. I find it difficult because I’ve worked for so long to find and develop my own voice, to create in a style felicitous to me. That stubborn part of me, that is both good and sometimes gets in the way. The thing is knowing when to stick to your guns and knowing when to let go. Sometimes you fall in love with a piece and lose your critical eye and sometimes you know it’s good no matter what some might say. Your faith is sometimes misplaced as in real life, you with people.

9 - What is the best piece of advice you've heard (not necessarily given to you directly)?
Quit smoking.

10 - What kind of writing routine do you tend to keep, or do you even have one? How does a typical day (for you) begin?
On the weekends I’m up at four and write for a couple of hours. I usually have a few notebooks around the house just in case.

11 - When your writing gets stalled, where do you turn or return for (for lack of a better word) inspiration?
I go to YouTube. I love listening to ideas about mostly anything, lectures on history, poetry, economics, medicine, philosophy. The other place I go is my notebooks.

12 - What fragrance reminds you of home?
Burnt toast.

13 - David W. McFadden once said that books come from books, but are there any other forms that influence your work, whether nature, music, science or visual art?
I find daydreaming helps a lot. That’s where I do my best work.

14 - What other writers or writings are important for your work, or simply your life outside of your work?
I find myself drawn to third world writers, their words speak to me the loudest; Mahmoud Darwish, Chinua Achebe, Frantz Fanon, Mourid Barghouti are a few writers I enjoy reading. Most white settler writing I difficulty relating to—it may be good, it may be great, but I find so much of it overbearing.

15 - What would you like to do that you haven't yet done?
Make the perfect spaghetti sauce.

16 - If you could pick any other occupation to attempt, what would it be? Or, alternately, what do you think you would have ended up doing had you not been a writer?
Had I not been a writer, I’d probably be in jail somewhere or dead, so the options of an occupation would be severely limited to drug dealer or vampire.

17 - What made you write, as opposed to doing something else?
What inspired me to write was probably being told I couldn’t.

19 - What are you currently working on?
A stream of consciousness or unconsciousness—it depends if I’m awake or not.