So sault means “jump,” as in
sauter in France, but not
in New France! In Old France
the I dropped out. In New,
they kept it: Sault Ste. Marie,
the leap, the rapids. But
in a linguistic roux, Sault
became Soo, reduced. Very
practical, actually, like
semaphores or an aquifier. 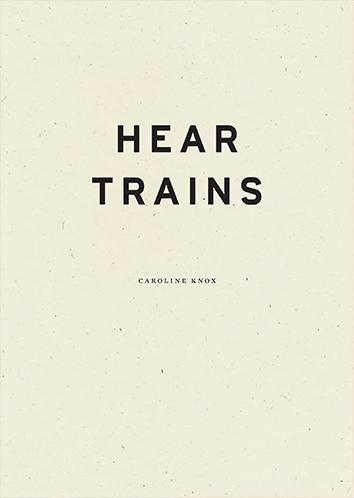 Massachusetts’ poet Caroline Knox’s tenth full-length poetry title is HEAR TRAINS (Seattle WA/New York NY: Wave Books, 2019), a collection of nuanced and expansive narratives that explore the ways in which we interact with and experience the world. There is such a richness to these poems, a descriptive and lyrical abundance that stand without a single wasted word, thought or image. “This / found me in philosophy,” she writes, towards the end of “BLUE POEM,” “and / happy to see blue as richly / useful, applicable in time / and space.” Part of the pleasure of her poems is in the unexpected, as she composes pieces that appear linear and possibly even straightforward, but are anything but, providing surprise in image, connection and turn. Her short poems are sketched as short scenes, as punches; her longer pieces explore longer thoughts and threads, finding the thread in the jumble, and vice versa. Referencing T.S. Eliot and Marianne Moore, she writes of two dogs in “TWO MIDDLE-AGED SPRINGER SPANIELS,” a meandering cascade that includes: “There were nice-looking worn rugs on the floor, and the two / elder dogs / ran around and around on the rugs, crumpling them. They barked no one / bark, / but hurled themselves faster and faster around the room, / messing up the rugs completely and dissociating them from their rug pads. / The dogs were / shedding all the while.” I am also quite taken with her explorations of language, such as her examination of the different roots of “chaos” and “inchoate” in “POEM,” that includes: “Well, / both words are lovely / noises to dramatize / confusion.”

Given the strength of her work and publishing history, I’m a bit surprised to see so little exploration on her work online via interview; in an undated interview for the third issue of American literary journal Jubilat (a short excerpt of which exists online):

Your poems seem to celebrate names and naming. Could you talk about where that celebratory impulse comes from?

I always want to discover a name to put in a poem such as Chidiock Tichborne, an almost impossible poet-name to say. I love naming and renaming, finding odd or strange or interesting names or ways of looking at things. I also love being surprised. I have a fear of writing the same poem over and over again, so I keep looking for more details that I haven't put in poems already. I don't want to get stuck. Don't poets feel that way? That they don't want to repeat themselves?