I saw a man with no ear, he was in the supermarket buying soup and beer and rutabagas from Hungary but I wasn’t hungry and I could see inside his head a place like a tree fort where I once played as a kid escaping the heat of a summer’s day that was heating up the century like a vat of bubbling cheese or a bunch of dirty magazines with Tater Tot rot beneath the skin’s bark and a starling screeching for dumpster space. 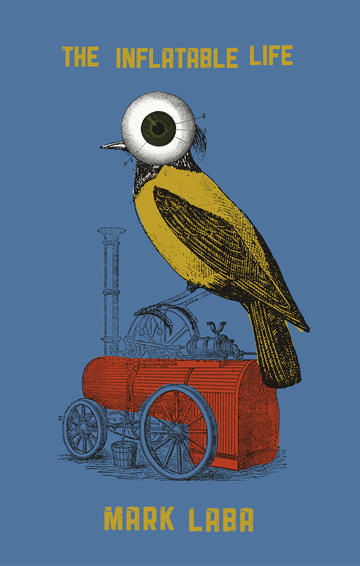 Vancouver poet Mark Laba’s second full-length poetry title is The Inflatable Life (Vancouver BC: Anvil Press/A Feed Dog Book, 2019), following his long out-of-print full-length debut, Dummy Spit (Toronto ON: The Mercury Press, 2002). Long ago a part of a cavalcade of small press enthusiasts that emerged in and around Toronto during the “small press scene” of the 1980s, Laba’s poetry chapbook debut, Movies in the Insect Temple, appeared through Stuart Ross’ Proper Tales Press in 1981. That first chapbook led to multiple, albiet occasional, appearances of his work over the years, from intermittent chapbooks to journal publications, inclusion in the anthology Surreal Estate: 13 Canadian poets under the influence (Toronto ON: The Mercury Press, 2007) and a first trade collection, as well as a decade’s worth of restaurant reviews in Vancouver’s Province (2000-2009). And now, more than a decade after his first trade collection, a second full-length volume, which appears, again, through Stuart Ross, the fourth in his “A Feed Dog Book” imprint through Vancouver’s Anvil Press. As the press release for the new book offers: “Some may call these surreal poems literary atrocities while others hail them as lyricism for an impossible century. Thing is, if Mark Laba didn’t write these poems, no one else would.”

Laba’s poems are constructed almost as absurd and/or surrealist collage, leaping from point to narrative point, and allowing the accumulation to build up and around an assembled meaning or sequence of meanings. The humour emerges from the shifts, and the shifts emerge from the assemblage, turning back in and around odd bits of observation, unexpected turns and outrageous connections. Given his long history with Stuart Ross, the parallels between their poems are rampant,and the cross-influence over the years is most likely rather obvious, especially with titles such as “The Wallace Stevens Hit Parade,” a sequence of poems that includes “Four Ways of Looking at an Alligator,” the first of which reads: “A man, a woman, and an alligator / wear sagging pantaloons / and smell of summer fields, skeletons and meat gravy, / their shadows traced by blotchy blackbirds with grim hallucinations.” If Ross is the outlandish observer through absurd-coloured-glasses, Laba might just be the realist (and possibly even the optimist) of the two, observing the absurdities of the world as well, but seeing what might change with a twist.

So soon the fleeting
tasks of youth

and a newly crowned king bellicose, varicose
warbles at the gates of doom like a wee songbird

greets the day
with a shit, regurgitation and a worm

before retiring to the trampoline park
for a bounce or two.