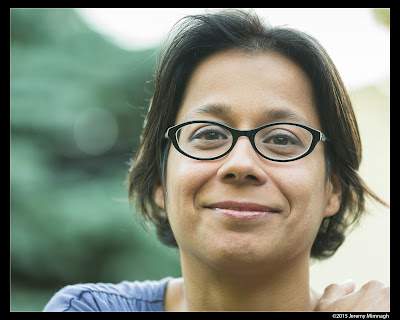 Soraya Peerbaye's first collection, Poems for the Advisory Committee on Antarctic Names (Goose Lane, 2009) was nominated for the Gerald Lampert Award. Her work has also appeared in Red Silk: An Anthology of South Asian Women Poets (Mansfield Press, 2004), edited by Priscila Uppal and Rishma Dunlop, Other Voices, Prairie Fire and The New Quarterly. She has contributed to the upcoming chapbook anthology Translating Horses (Baseline Press). Her second collection, Tell: Poems for a Girlhood, is forthcoming with Pedlar Press in fall 2015.

1 - How did your first book change your life? How does your most recent work compare to your previous? How does it feel different?
My first book was a way of asking myself if I was serious. I had studied theatre, direction, collaborative creation, and translation, and was tip-toeing towards writing, but was utterly intimidated by the act of solo creation. The book was far from what I wanted it to be – some poems, and relationships between poems, I didn’t know how to resolve; still, sending it out into the world was an acceptance of authorship.

My most recent work is the first I’ve created in any context that I can say is done. I was more restless in writing it, was less satisfied; “failed better” in Beckett’s beautiful terms; I sought out the relationships that would help me complete it; I had more stamina.

2 - How did you come to poetry first, as opposed to, say, fiction or non-fiction?
Poetry felt like a more open space for not knowing.

I remember reading poetry when I was young and being in awe of the poet’s ability to say “I” as though a single voice mattered. I came to poetry late because I didn’t think I could do that. I didn’t go to fiction because I didn’t know if I had a story to tell. In some ways that’s still true; in both my collections I worked through someone else’s story.

Non-fiction would have been a more natural fit, but I wanted to argue my own literalism, my own need for research, reason. Though again – in both my collections, research has been integral. I suppose I made assumptions about the intent of different forms, which I wouldn’t now that I’ve read more. Non-fiction seemed to have a riptide that could carry me towards some kind of righteousness – I mean that without prejudice, I’m only trying to acknowledge my own desire for a stance – and I had an instinct to work against that. I wanted to stay close to that place that felt troubled and uncertain.

Suzanne Robertson (Paramita, Little Black, Guernica Editions) once said to me that fiction is like a river; poetry is like a well. I like the well. I need time for a moment to drop.

3 - How long does it take to start any particular writing project? Does your writing initially come quickly, or is it a slow process? Do first drafts appear looking close to their final shape, or does your work come out of copious notes?
It comes slowly. I write, and overwrite. And then I unwrite. It’s like concentrating a solution: boiling away water so that the found elements become more pronounced.

4 - Where does a poem usually begin for you? Are you an author of short pieces that end up combining into a larger project, or are you working on a "book" from the very beginning?
A book from the very beginning, or at least, a long poem. I’ve rarely written the kind of “one-off” poem that arises from an incidence, a passing state, etc. A series of poems allows me to look at the matter from different perspectives, with different relationships of time.

5 - Are public readings part of or counter to your creative process? Are you the sort of writer who enjoys doing readings?
I’ve never really thought of readings as related to my creative process; I might now that you’ve asked. I am nervous, but I like voicing poems. I don’t know what it will be like to read from Tell, but I think it will be different for me – the poems are based on transcripts. Because there are other speakers in the poems, my feelings for the words are more complicated, less predictable; when I read them out loud in my living room they sometimes catch me off guard.

6 - Do you have any theoretical concerns behind your writing? What kinds of questions are you trying to answer with your work? What do you even think the current questions are?
I think I am always trying to answer the question, how did I come to be here – through what circumstance, chance, choice, systems. That was true of the poems about my dad, or about travelling with my brother to Antarctica. How did three brown people from an island in the Indian Ocean, at the edge of the former British empire, come to be standing at different times on an uninhabited continent, to have their photograph taken next to the very same whalebone? Tell asks a more urgent variant of the question. How did I come to be safe?

I’m trying to name that space between the clear, political articulation of something, and what feels impossible to articulate and raw. When I’m writing about racism, or my own privilege, I’m trying not to name it, because for so many years of my life it was a feeling without a name. The inarticulacy of it makes it a different experience than when you have a name for it. It is bewildering, in the pure, etymological sense.

7 – What do you see the current role of the writer being in larger culture? Does s/he even have one? What do you think the role of the writer should be?
I think our encounter with writers has the same potential as our encounter with any other human being. It’s the potential to see how someone other than us sees. How things matter to them, how things relate.

I love these words from Steinbeck’s The Log from the Sea of Cortez: “None of it is important or all of it is.” I think a writer tells us what none or all is for her.

8 - Do you find the process of working with an outside editor difficult or essential (or both)?
Essential, when you find the right editor. I worked with Suzanne and Gerry Shikatani preparing the manuscript of Tell for submission, and relied on them to help me stay true even while I experimented with form. Working with Beth Follett of Pedlar Press was extraordinary. Her response and curiosity went beyond editing the text; she created a rich context for our conversations, writing long responses full of observations beyond a word, a line, a poem; prompting new poems to solidify what she called “the sub-terrain”; all while we exchanged essays by Adrienne Rich and Cathy Park Hong. Like creating an echo chamber around the work.

It isn’t about approval, and in fact I can see where my resistance to certain editorial suggestions focused my own instinct.

9 - What is the best piece of advice you've heard (not necessarily given to you directly)?
Any line from Veda Hille’s song “Instructions”. “17: Remember to surface. 18: Endeavour to dive.” Or “1. Pick it up and put it in your pocket.”

10 – [I make a living working in the dance field, as a producer, manager, consultant etc.] How easy has it been for you to work between disciplines (poetry, dance)? What do you see as the appeal?
I’m neither a choreographer nor a dancer, but I read dance and poetry in similar ways. I think it’s the appeal to an irrational, sensual way of receiving narrative. I find that a choreography ends in ways akin to the ways that poems end. I often have a similar sense of physical suspension.

11 - What kind of writing routine do you tend to keep, or do you even have one? How does a typical day (for you) begin?
I need a sequence of days to write; I can’t do it for a couple of hours here or there. Every now and then I will carve out three or four days between contracts to write; more when grants allow it.

12 - When your writing gets stalled, where do you turn or return for (for lack of a better word) inspiration?
Friends. Reading. Re-reading. Not writing. Often I return to the first collections of poets I love (this was also wisdom from Suzanne). Or I turn to certain poets whose style is unadorned: without technical display of virtuosity, but with whole-hearted and -minded presence, the most direct naming of experience. Which of course is its own virtuosity. But I mean, a style which does not value virtuosity more or less than plainspoken-ness and presence.

14 - David W. McFadden once said that books come from books, but are there any other forms that influence your work, whether nature, music, science or visual art?
On a formal basis, not that I know. But branches of natural science have often influenced content; I find the technicality, specificity and mystery of the language opens wide fields of association. It also connects me back to my geeky high-school self, and that state of mind where concentration becomes obsession, fascination.

15 - What other writers or writings are important for your work, or simply your life outside of your work?
I never know where to stop with this question. Touchstones include Marilyn Dumont, Souvankham Thammavongsa, Leah Lakshmi Piepzna-Samarasinha; Ronna Bloom; Lorraine Niedecker and Inger Christensen; Mahmoud Darwish and translator Fady Joudah; more recently Roxane Gay, not only for her writing but her vocal critique of North American literature.

16 - What would you like to do that you haven't yet done?
Sing flamenco.

17 - If you could pick any other occupation to attempt, what would it be?
An ASL interpreter. That video that went viral a few months ago, of an ASL interpreter singing Eminem, really turned me on.

18 - What made you write, as opposed to doing something else?
It gave me time to say what I meant. Or simply to know what I meant.

19 - What was the last great book you read? What was the last great film?
Last great book: I am caught between Moby Dick and A Tale for the Time Being, by Ruth Ozeki. Oddly, maybe, for the same reasons: the intimacy between colossal beings, or events, and ordinary human life. The radical relationship between autobiography and catalogue. Cetology, corvology (?) or the flotsam of a tsunami. Ecological collapse. The limits of spiritual practice. The insistence of myth…They even begin the same way. “Call me Ishmael.” “Hi! My name is Nao.”

20 - What are you currently working on?
I’ll be working with dance artists in the next year, mostly as a producer, but occasionally as a collaborator.