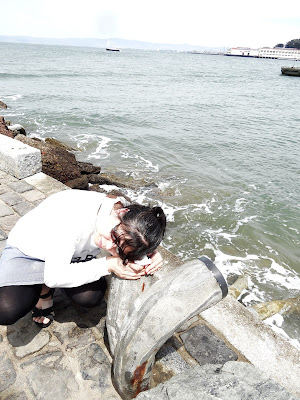 Elaine Woo is the author of Cycling with the Dragon, published by Nightwood Editions in Fall 2014. She is a contributor to Shy: An Anthology, which won a silver medal IPPY (Independent Book Publishers) award in 2014. Her art song collaboration, "Night-time Symphony" with composer Daniel Marshall won a Boston Metro Opera Festival prize in 2013. Elaine contributed to V6A: Writing from Vancouver's Downtown Eastside which was a finalist for the City of Vancouver Book Award in 2012. She is a graduate of the University of British Columbia's creative writing program and has been published internationally.

1 - How did your first book change your life? How does your most recent work compare to your previous? How does it feel different?
My debut book opened up a geyser of reading and performance opportunities reaching a far wider range of people. I met many other writers whom I wouldn’t normally have been exposed to.  They broadened the scope of my thinking.  My book is a culmination of eight years work beginning from when I first returned to writing in my late forties. My most recent work has more humour in it, some more acerbic.  I’ve never maintained a veneer of perfection in my work and readers see my true “stained” self and other flawed characters. I peer closely at family, self, and love. More so than before, I look at what it means to be “small” in the face of powerful parents, as Gaia, confronting uncertainty, death, tyrannical employers, depression, cultural norms, aging, racists, and loneliness.

The work in my first book feels different from my early pieces in various international literary journals in that it’s more sharply honed.  I’ve had very positive feedback from family and friends.

2 - How did you come to poetry first, as opposed to, say, fiction or non-fiction?
I love the options for playing with language, signs, symbols, and formatting that are less used in fiction and non-fiction.  I still have the first poem I wrote in Grade 8.  My English teacher asked us to make a chapbook of our own work and I went to a leather store to buy a piece of suede for my cover.  I wrote a concrete poem about a mouse as the opening poem in this little venture. It seems I’m still writing about “mice” of a different sort.

3 - How long does it take to start any particular writing project? Does your writing initially come quickly, or is it a slow process? Do first drafts appear looking close to their final shape, or does your work come out of copious notes?
It doesn’t take long to start most writing projects.  An emotional reaction to something may be the first spark.  First drafts don’t look at all like the final project.  I often go through 25 drafts for any one writing project.  For, Cycling with the Dragon, my debut poetry collection, I may have gone through 50 drafts (I’ve actually lost track).

4 - Where does a poem or work of fiction usually begin for you? Are you an author of short pieces that end up combining into a larger project, or are you working on a "book" from the very beginning?
Emotional upset is a great impetus for a poem and have been my greatest source of inspiration.  I begin with a whole hodge podge of shorter pieces.  I don’t know from the beginning how they’ll work together but sense they all belong together.

5 - Are public readings part of or counter to your creative process? Are you the sort of writer who enjoys doing readings?
They are both part of and counter to my creative process.  Part of, in the sense that they are a testing ground for whether a poem resonates.  I enjoy that sort of live feedback.  Counter to, in that public readings take time and energy away from my writing.  Writing is my way of processing the world and I’m forced to process in a different outward-leaning way before an audience when I read publicly.  This is counter to my nature.

8 - Do you find the process of working with an outside editor difficult or essential (or both)?
I don’t find working with an outside editor hard at all.  I have little ego about my work, making the process very simple.  I don’t believe I know best.  I was very lucky in working with Silas White of Nightwood Editions because he was very respectful in not touching the text of my poems.  He had some questions for me but when I gave him my answers he understood why I used certain words over others.  He did cut many poems but ultimately, he created a very shapely book.  My work stood stronger for having been edited by Silas.

9 - What is the best piece of advice you've heard (not necessarily given to you directly)?
The best piece of advice I’ve heard about writing is to write in the midst of chaos.  I was given this advice by Madeleine Thien when I complained to her that outside noise was preventing me from writing.  I harnessed the negative energy of the noise into energy in my poems.

10 - How easy has it been for you to move between genres (poetry to non-fiction to libretto)? What do you see as the appeal?
I no longer see distinct boundaries between poetry, non-fiction, and libretto.  It is easy to move between poetry and libretto. Non-fiction, I see as more akin to formal speech but because it is not so different from everyday speech, I don’t have difficulty transitioning to it.  I’ve been thinking about the divide between different genres of literature and for my second manuscript am aiming in some pieces for just a literature that is indistinct as one genre or another.

11 - What kind of writing routine do you tend to keep, or do you even have one? How does a typical day (for you) begin?
I do not have a writing routine.  When an idea comes to me, then I’ll write it down and perhaps take the initial idea further.  I also might leave the idea for a while and come back to it perhaps a week or month later.  The only routine I have is to write into the wee night hours.

12 - When your writing gets stalled, where do you turn or return for (for lack of a better word) inspiration?
Lately, I’ve been turning to American Hybrid, ed. Cole Swensen and David St. John.  The inventiveness of the poets featured in this Norton Anthology trigger my own creativity.  My good friend, poet Carol Shillibeer, introduced me to the book.

13 - What fragrance reminds you of home?
The fragrance of cedar reminds me of home.  I live surrounded by forest.

14 - David W. McFadden once said that books come from books, but are there any other forms that influence your work, whether nature, music, science or visual art?
All of these influence my work.  Some of my poems come to me when I’m walking in the woods, or at a concert, or from mathematical concepts, or from a visit to art galleries.

15 - What other writers or writings are important for your work, or simply your life outside of your work?
I’ve been reading a lot of Rimbaud lately.  I love reading graphic novels and am captivated by the wedding of art and writing which I aim for strictly with words.  Madeleine Thien turned me onto the work of Asian exile poets, Bei Dao and Ko Un.  I love the work of Brenda Hillman.  In my life outside of work, the writings of vegan advocate, Neal Barnard, MD (President of the Physicians Committee for Responsible Medicine) are very important to me.  I credit my good health to being mostly vegan.  Good health affects your whole outlook and life.

16 - What would you like to do that you haven't yet done?
I have created some graphica, some of which is graphic novel length.  I have also written a childrens’ book.  Both of these, I would like to see published some day.

17 - If you could pick any other occupation to attempt, what would it be? Or, alternately, what do you think you would have ended up doing had you not been a writer?
If I were to choose another occupation, I would be a visual artist or film maker.  My work is very visual.  It would not be a huge leap to move into creating visual media.

18 - What made you write, as opposed to doing something else?
I had an absolute compulsion to write.  I was driven to express myself.  There is creativity and freedom in writing.  Before I wrote, I did clerical and secretarial work, which I found very strait jacket.

20 - What are you currently working on?
I’m working on a second poetry manuscript which is looking to be a book about psychological and social mores.  The poems in this manuscript are more veiled and “misty” than in my first book.