Most Likely to Secede

I am a room full of people. I am a room
facing people forward. What I’ve done

keeps me filled & I build myself taking
their heads. I wasn’t hoping for a whorl,

rended for the era was one of undoing.
My people burned. My hospital burned

& burned. Birds went thump in the rays
like a stillborn crown, mainly baggage

where more burned inside the window.
Heat of so much clapping sang blisters

on my skin. I am a room full of people
who confess every millionth minor bird

& burn each one. Other, smaller birds
were birds left burning with their cribs. 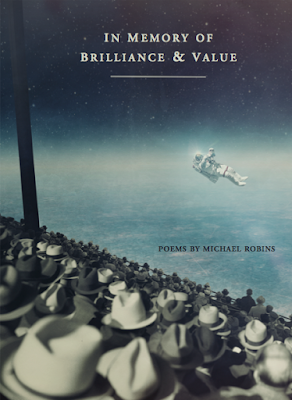 I’m intrigued by the musicality of the couplets in Chicago poet Michael Robins’ latest collection, the elegy-esque In Memory of Brilliance & Value (Ardmore PA: Saturnalia Books, 2015). In Memory of Brilliance & Value is Robins’ third full-length poetry collection after The Next Settlement (University of North Texas Press, 2007) and Ladies & Gentlemen (Saturnalia Books, 2011). Set in five numbered sections, each of which include a dozen or so poems, each poem is constructed in short, curt couplets reminiscent slightly of the work of Toronto poet Marcus McCann for its condensed, sharp turns. Robins’ language-play is far less overt than in McCann’s poetry, but the cadence retains a lovely bounce and patter, patterning across a ridgeway of delightful sound. As he writes in “Poem for Degrees & Resistance”: “Some bother, some relax & lying back / welcome the bell of the buckled deck // as though no stony warning can scorch / our hips. Over love the iceberg turns, // mistakes standing if the fellow stands / to leap as the poet before him.”

Robins’ precise and meditative poems are tightly-packed, and occasionally tightly-wound. Through a series of anecdotes, observations and queries dressed in lyric couplets, his poems display a fine tension of articulating a low-level anxiety via a deceptive calm.

Outside the Pay-Per-View Museum

Water was pleading for it, fluttered
sheets wrestled in the foam & roar.

Not a herd, it’s the string of buffalo
who once grazed coolly. Who wasn’t

bewildered by wagons bravely rolled,
fanning the wilds toward a baldness.

No bray of a biplane either, neither
smoke, nor a family who isn’t yours.

fast the horses producing the plains.
They were wheeling, then a caravan

poured forth these children. They’re
inching over the hills with grubbing,

boasting wet in a landscape portrait.
It was shot-for-shot. It was sensation.