A Day at the Mall Reminds Me of America

Recently, my 14-year-old sister was approached at the mall to see if she’d be interested in working at Hollister, or Abercrombie and Fitch, or American Eagle. I can’t remember.

She’s that beautiful. And with the mall’s lights all around her—I can only imagine.

Yet on Facebook, one of her friends calls her a loser. More write, “I hate you.”

I wonder if Kanye knows that these girls are experimenting. As with rum. As with skin, all the ways to touch it.

My day at the mall begins with a Wild Cherry ICEE and an Auntie Anne’ Original Pretzel. A craving.

I pass women who you can tell are pregnant, and I know we all might be carrying daughters.

The mall is so quiet. The outside of the Hollister looks like a tropical hut, like the teenage girls should be sweating inside.

No one’s holding doors for me yet, but they will as I take the shape of my child.

And if my child has a vicious tongue, it will take shape lapping at my breast. 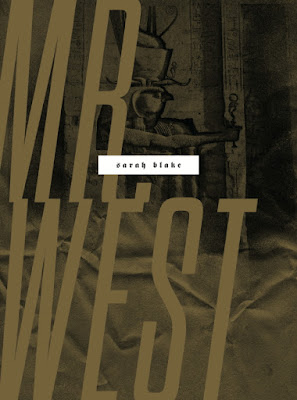 American poet Sarah Blake’s first collection is Mr. West (Middletown CT: Wesleyan University Press, 2015), a collection that “covers the main events in superstar Kanye West’s life while also following the poet during her pregnancy, a time she spent researching and writing these poems. This book explores how we are drawn to celebrities—to their portrayal in the media—and how we sometimes find great private meaning in another person’s public story, even across lines of gender and race.” In Blake’s collection of lyric meditations, the blend of her own personal threads against Kanye’s public self are intriguing, and her pop culture commentaries allow the distraction against her being able to dig further into what, at times, becomes a deeply personal and revealing work. The book opens with the poem “‘Runaway’ Premiers in Los Angeles on October 18, 2010,” that includes: “I am two months pregnant. // Monday this premiere, Tuesday this article, Wednesday / my first ultrasound, with my child’s boneless arms in motion.” The piece ends with the declaration: “The two of you, tied to this week in my life.”

The bulk of Mr. West explores the public details of Kanye West’s life and his career. Blake writes of Kanye’s public declarations, his mother, Taylor Swift, his automobile accident, specific performances, Hurricane Katrina and his infamous ego, even as she weaves in details of her pregnancy alongside quantum physics, philosophy and notions of fame. Writing seriously on pop culture, Blake’s poems attempt to enter into the information of his life, writing: “Kanye, if only I could write a poem for you and not about you.” One could easily make a comparison between Sarah Blake’s first collection Mr. West and Philadelphia poet and editor Julia Bloch’s first collection, Letters to Kelly Clarkson (Sidebrow Books, 2012) [see my review of such here] (as well as works by Montreal poet David McGimpsey) for obvious reasons, as much as for the fact of both books attempting to speak directly to their subject through poetry, and through using literature to explore seriously a genre not often taken as seriously as perhaps it should. As she writes in the poem “The Fallible Face”:

Kanye, you must have a relationship with your reflection I can’t
understand.
To structure, to surgery, to form.

How did they put you together again?
How did you feel when someone saw you who didn’t know

you had ever looked like someone other
than yourself?