One thing I’m not doing in my poems: reporting
on anything that really happened.

When I say I’m from New York, Glaswegians say, “Oh, I love Woody Allen.” They cannot construe how large a state can be. I just happen to actually be from Manhattan. (“The Ungovernable”) 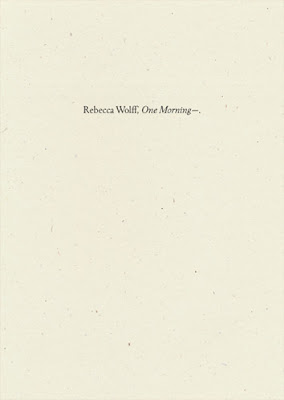 Albany, New York poet, editor and publisher Rebecca Wolff’s fourth poetry collection is One Morning—. (Wave Books, 2015), following her collections Manderley (University of Illinois Press, 2001), Figment (W.W. Norton, 2004) and The King (W.W. Norton, 2009). There seems something more open, and less constrained, in the poems of this collection—something to do with the breath—compared to the poems in her prior collection, a collection of poems on becoming and being a mother. Perhaps “constrained” isn’t the right word—but there is certainly something about the poems in this collection that is more open somehow, in the movement of line and breath. There is something less formal and more conversational, yet no less meticulously formed. As the poem “Palisades” opens: “Interred in region // nothing super global in this locale // where I live, where I / bought – // what would I tell you about it if I could?”

Structured in six untitled sections, the poems in One Morning—. are engaged with structures and politics, and governing bodies and power (both real and perceived), delighting in odd flashes of wry humour combined with a lack of patience for nonsense. Her poems sever and subvert, shift and carve through the lyric without missing a beat or a step, composed without a wasted word or gesture. As she writes in the poem “Fronting”: “And I trust people // to make good choices / so I don’t have to impale them // on the tines of my pitchfork.”

A morning’s worth of contretemps
Japan has bigger tides

In sharing one finds extra peace
and this is what I’ll say:

“Oh, boil the cabbage down, girls”
I’m on my way to work

In view the smallest leaf, you know
measured by a glyph

I really mean my daughter’s face.

At one hundred and forty pages, One Morning—. has considerable weight, and the poems are incredibly sharp. There is something curious about the way Wolff utilizes “confession,” such as the poem/section “The Curious Life / and Mysterious Death / of Peter J. Perry.” She utilizes personal information to explore a series of interrogations, and even acknowledgments, to incredible degree, even as the fact of the information being factual as hers, or anyone elses (there is the suggestion that the narrator is related to Peter J. Perry, for example), becoming entirely beside the point. Her poems confess, and yet, remain private; what she gives away is far more valuable and far less tangible to track than whether or not a particular morsel of information really happened, and in the ways in which she informs. She is pointedly skilled at knowing exactly how and what to impart, and the reasons why, allowing her poems an intimacy that is deeply felt, without the distraction of the extraneous.

feeling it at the gas pump
fumes unchained

squad car drove up
my tailpipe

called my friend
in

to see what he could do for us. (“Mad as Hell/Not Going to Take It”)