Some lines I cut as the author of this book:

The Haitian poet Roumer admires an ass so spectacular

It is like a gorgeous basked brimming with fruits and meat

When I’m out walking I think of this

To my classified adulteries

I have to dig into a platform of reason

Create a pond in the land of misconduct 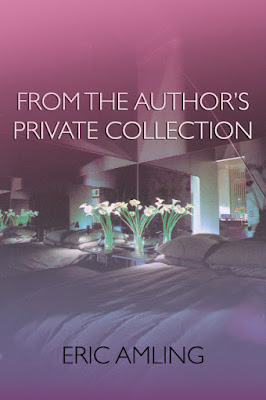 The poems that make up New York City poet and artist Eric Amling’s first trade collection, From the Author’s Private Collection (Birds, LLC: 2015), are constructed out of an accumulation of phrases, as each poem builds its slow and unexpected way towards something odd, even confusing, and bafflingly coherent. Writing on Amling’s visual art in the “Visual Interview: A Poetic Interlude with Eric Amling” at The Wild, Michael Valinsky refers to Amling as “a master collage-maker,” a description that could also refer to his poetry. “It’s hard to explain / My ghost writing / When I remained / An insular entity,” he writes, to open the eighteen-part sequence “Rare and Special Interests.” Amling’s poems might appear, at first, to be all over the place, but manage to include a multitude of directions while maintaining a coherent through-line; the mélange is simply how he travels from one point to another. One could compare his poems to the work of Calgary poet Natalie Simpson, who also works from a series of notes structured together in a series of collisions, specifically her Thrum (2014) [see my review of such here]. “How do you kill / A mountain of a man / But with a river of fries / Grass / Growing around the gurneys / Because the cancer patients / Are in hammocks,” he writes, further in the same extended poem. In poems that stretch, fragment and sequence, it is really in the collision of phrases and sentences that his pieces cohere, coming together from a near-chaos into something unique, connecting pockets of clarity and insight to form a broader spectrum of serious questions and observations on culture, morality, human interaction and the nature of art. As he writes to open the poem “Liquid Assets”: “The civic purposes of the museum, were not to be a ‘mere cabinet of curiosities which serve to kill time for the idle’ but instead ‘tend directly to humanize, to educate and refine a practical and labourious people.’ Given his main focus as a visual artist, it would seem his poetry exists both as a serious work that stands on its own merits as well as an extension of his visual practice, each medium allowing a potential insight into his work in the other. I would be curious to see how his practice continues.

I assure you these sensations will be obliterated from memory

On an afternoon walk to the outlet for sunglasses

Where residents form the sum of a paralyzing equation

In windbreakers dreaming a collective coupe

You see teenage skyscrapers on the horizon

And one can’t help but think of entrepreneurs

A cell phone vibrating a beach of desk pennies

A self-image no distance can cure

You are not translating the world from scratch

Do it for the right reasons

Get on with showing your love already (“Pinnacle Meltdown”)