When I was a kid, my parents took me to Europe. The high point of the trip wasn’t Big Ben or the Eiffel Tower but the flight from Israel to London—specifically, the meal. There on the tray were a tiny can of Coca-Cola and, next to it, a box of cornflakes not much bigger than a pack of cigarettes.
My surprise at the miniature packages didn’t turn into genuine excitement until I opened them and discovered that the Coke tasted like Coke in regular-size cans and the cornflakes were real, too. It’s hard to explain where that excitement actually came from. All we’re talking about is a soft drink and a breakfast cereal in much smaller packages, but when I was seven, I was sure I was witnessing a miracle.
Today, thirty years later, sitting in my living room in Tel Aviv and looking at my two-week-old son, I have exactly the same feeling. Here’s a man who weighs no more than ten pounds—but inside he’s angry, bored, frightened, and serene, just like any other man on the planet. Put a three-piece suit and a Rolex on him, stick a tiny attaché case in his hand, and send him out into the world, and he’ll negotiate, do battle, and close deals without even blinking. He doesn’t talk, that’s true. And he soils himself as if there were no tomorrow. I’m the first to admit he has a thing or two to learn before he can be shot into space or allowed to fly an F-16. But in principle, he’s a complete person wrapped in a nineteen-inch package, and not just any person, but one who’s very extreme, an eccentric, a character. The kind you respect but may not completely understand. Because, like all complex people, regardless of their height or weight, he has many sides. (“Big Baby”) 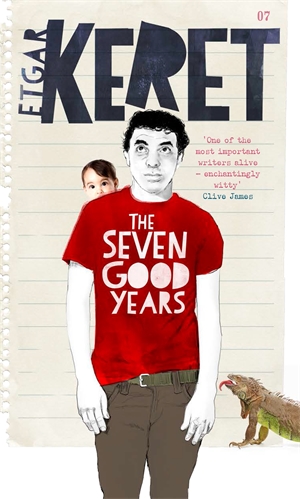 Given that Etgar Keret is one of the most remarkable fiction writers I’ve read, I felt I had no choice but to pick up a copy of his new memoir, The Seven Good Years (2015). The Seven Good Years is a collection of short non-fiction pieces composed and collected over a seven year period, set in seven sections: “Year One,” “Year Two,” etcetera. The seven year stretch of the pieces run from the birth of his son to the death of his father, in which he observes and comments upon his immediate circle of self, family and identity. He moves through a series of observations on culture and cultural differences, the ongoing shelling around him in Tel Aviv, book tours and the nature of, and the complications, joys and confusions inherent to being father, husband and son. Words that describe his ongoing work often include “wry,” “poignant,” “witty,” “frank,” “enchanting” and “hilarious,” and there is such a buoyancy and optimism to even his darkest writing, one that discussing his parents’ survival of the Holocaust, or another attack in Tel Aviv on the day his son was born, or even the slow death of his father simply can’t diminish. This is (in my opinion), quite simply, an incredibly intimate and understated book by one of the finest of contemporary prose writers.

There is something tricky about attempting to excerpt from Keret’s prose, making me realize the extent to which his short pieces exist as entirely self-contained units. It is impossible to understand the depth and breadth of each essay without presenting entire three-page pieces (which I will not do here, for a variety of reasons). In thirty-six pieces, Keret presents self-contained portraits of an individual, a situation or an idea, sometimes wrapping the three simultaneously, from his sister’s conversion to ultra-orthodoxy, admiring his elder brother, or even the optimism of his parents, who might be forgiven had they slid into pessimism. “When I was a kid,” he writes, in “Long View,” “my parents used to tell me bedtime stories. During World War II, the stories their parents told them were never read from books because there were no books to be had, so they made up their own. As parents themselves, they continued that tradition, and from a very young age, I felt a special pride, because the bedtime stories I heard every night couldn’t be bought in any store; they were mine alone. My mother’s stories were always about dwarves and fairies, while my father’s stories were about the time he lived in southern Italy, from 1946 to 1948.” Further in the same piece, he writes:

When I try to reconstruct those bedtime stories my father told me years ago, I realize that beyond their fascinating plots, they were meant to teach me something. Something about the almost desperate human need to find good in the least likely places. Something about the desire not to beautify reality but to persist in searching for an angle that would put ugliness in a better light and create affection and empathy for every wart and wrinkle on its scarred face.

Posted by rob mclennan at 8:31 AM
Labels: Etgar Keret, Granta