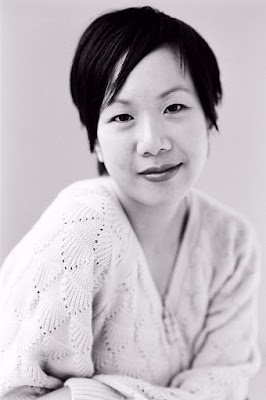 Jen Sookfong Lee was born and raised in Vancouver’s East Side, where she now lives with her son. Her books include The Conjoined (forthcoming in Fall 2016), The Better Mother, a finalist for the City of Vancouver Book Award, The End of East, and Shelter, a novel for young adults. Her poetry, fiction and articles have appeared in a variety of magazines and anthologies, including Elle Canada, Hazlitt and Event. A popular radio personality, Jen was the voice behind CBC Radio One’s weekly writing column, Westcoast Words, for three years. She appears regularly as a contributor on The Next Chapter and is a frequent co-host of the Studio One Book Club. Jen teaches writing in the Continuing Studies departments at both Simon Fraser University and the University of British Columbia.

1 - How did your first book change your life? How does your most recent work compare to your previous? How does it feel different?
My first book was a novel, The End of East, and it completely changed my life in all ways. I was exclusively a poet before, and The End of East was the first piece of fiction I had ever written, apart from school assignments. So, the development of that book rewired my brain. Also, its reception in the big bad world was really positive, which meant that I was suddenly A REAL WRITER, and being invited to festivals and being interviewed and drinking free wine. And it led to my secondary career in broadcasting.

The novel that will be published in 2016, The Conjoined, is so different from my other books, which were largely written around character and theme. The Conjoined is plot-based, and messes with the conventions of crime fiction. The writing of it was hugely freeing for me, because I think readers have come to expect a certain amount of sad lyricism from me, and this book is far more gritty and, let’s face it, gross. I’ve come to realize that I really enjoy grossing people out.

2 - How did you come to fiction first, as opposed to, say, poetry or non-fiction?
I actually came to fiction second, and started in poetry, and had a few things published in literary magazines before I started writing The End of East. Oddly, The End of East began its life as a long poem, but at some point, when the long poem was getting unwieldy, I made the decision to turn it into a novel. I was 24 at the time, and my youthful fearlessness had me convinced it would all be fine. And it was, but that novel took seven years.

3 - How long does it take to start any particular writing project? Does your writing initially come quickly, or is it a slow process? Do first drafts appear looking close to their final shape, or does your work come out of copious notes?
For novels, my first drafts take between six months to a year, which is probably an average amount of time. I do a fair amount of planning and initial research, but I do it concurrently, while I’m writing the first scenes. It’s important to me to have a sense of the tone of the book before I can really create an outline or make any notes at all. But I do need to plan and plan carefully, because I like to write toward a destination, and to have a sense of how the narrative should develop. This is not to say, of course, that the outlines don’t change as I discover new threads during the writing.

My first drafts are horror shows! They are so, so different from the final versions. I have a habit of tearing novels apart structurally and putting them back together again, which is a process that feels really essential to me. Each book contains an element that is consistent throughout the seven or eight drafts I usually write. The End of East kept one main character intact. The Better Mother’s narrative arc was set very early on. And the first chapters of The Conjoined haven’t changed at all.

All novels seem like they take forever to write. Come on now.

4 - Where does a work of fiction usually begin for you? Are you an author of short pieces that end up combining into a larger project, or are you working on a "book" from the very beginning?
With the exception of my first novel, I always know what I’m writing before I start. My ideas are very genre-specific; I have novel ideas, or poetry ideas, or short fiction ideas, or cultural criticism ideas. Fiction ideas can come from anywhere—news stories, other art forms, something you overhear in a conversation. I’m never at a loss for ideas. But I often fail at the execution.

5 - Are public readings part of or counter to your creative process? Are you the sort of writer who enjoys doing readings?
I don’t like the actual reading part. It’s more fun for me to be on a panel, or have a discussion on stage with other people or the audience. I like the performance aspect of it, but standing at a podium and reading from my books feels musty and creaky. I would rather make jokes and talk about writing.

Meeting people and being out in the world always fuels my creativity. I always say that my books would be the most boring things in the world if I wasn’t a social person. I am relentlessly social and an obnoxious ham, but this is how I observe humanity, and I keep those observations in my head for my next project.

6 - Do you have any theoretical concerns behind your writing? What kinds of questions are you trying to answer with your work? What do you even think the current questions are?
My umbrella goal is always to create a narrative that attempts to give shape to the mess of our lives. It’s a universal compulsion for all writers, I think. More specifically, I like to explore expectations, meaning the expectations we place on ourselves, or expectations that are placed on women and their bodies, or people of colour and their positions in majority culture, or those who live in poverty. All of my novels have been set in and around Vancouver’s Downtown Eastside, which is very much a neighbourhood of density, both in terms of population and human experience. And it’s a neighbourhood that holds a lot of meaning for me personally. It’s where my family began their journey in Canada, and I am firmly committed to its health and the lives of its residents.

7 – What do you see the current role of the writer being in larger culture? Does s/he even have one? What do you think the role of the writer should be?
Sweet cracker sandwich, I have no idea! Writers are the ones who create stories and the world will always need stories, in evolving forms, of course. I suppose our job is to reflect humanity; we’re the ones who remind you of your past, and who give space to your experiences. And I think the main job for writers is to create narratives that resonate, that make readers feel less alone. A big reason I read books at all is so that I can have that aha moment. You know the one.

8 - Do you find the process of working with an outside editor difficult or essential (or both)?
I love editors. All of my editors have genuinely wanted to help make my books the best that they could possibly be. And that’s never a bad thing. I like to be challenged, and I like it when someone forces me to consider my choices.

9 - What is the best piece of advice you've heard (not necessarily given to you directly)?
To expect nothing but celebrate everything. This should be tattooed on every writer’s arm.

10 - How easy has it been for you to move between genres (literary journalism to fiction)? What do you see as the appeal?
It hasn’t been difficult. I used to work in magazines and small press publishing, so was always used to writing different things for different audiences. The key has always been to write something I deeply care about, whether it’s gender politics or pop culture or poems about dying relationships. I do think writing in different genres helps every genre you tackle, in the same way that playing more than one instrument will give you a better understanding of music in general.

11 - What kind of writing routine do you tend to keep, or do you even have one? How does a typical day (for you) begin?
Right now, I write at night, after my son has gone to bed. It’s exhausting, but that’s all the time I have! When he goes to school full-time, I’m very much looking forward to not living like a vampire. I work in bed, surrounded by books, while my dog snores beside me.

12 - When your writing gets stalled, where do you turn or return for (for lack of a better word) inspiration?
I just write through the pain. I’m a bulldozer like that. I always say that even if you write 2,000 words of garbage, if even one line or one idea is worth keeping, then your time was still well-spent.

13 - What fragrance reminds you of home?
Simmering chicken stock.

14 - David W. McFadden once said that books come from books, but are there any other forms that influence your work, whether nature, music, science or visual art?
I’ve been influenced by photography specifically, partly because there have been so many brilliant photographers from Vancouver who have used the city’s idiosyncrasies to create images that are both intimate and epic. Fred Herzog has played a big role in both The End of East and The Better Mother, and I kept going back to Jeff Wall’s images over and over again during the writing of The Conjoined. Theodore Wan’s photographs have also highly influenced my writing,

15 - What other writers or writings are important for your work, or simply your life outside of your work?
I was always a Canlit nerd and I love Margaret Laurence more than any other Canadian fiction writer. I find her books comforting, like a cushy armchair. The poems of John Thompson slay me every time I read them. Donna Tartt and Junot Diaz are my favourite contemporary fiction writers. And a friend of mine recently introduced me to Kim Addonizio’s poems and I think she very well might be my spirit animal.

16 - What would you like to do that you haven't yet done?
I would love to publish a poetry collection. After many years away from poems, I’ve been writing them again lately. And I love it.

17 - If you could pick any other occupation to attempt, what would it be? Or, alternately, what do you think you would have ended up doing had you not been a writer?
I would really like to make pies. I have this idea that I should be driving a vintage truck and delivering pies to happy people. Because who doesn’t love pie?

18 - What made you write, as opposed to doing something else?
I don’t think I had a choice. I am tenacious as a writer and have never had a back-up plan. There is nothing else I can or should do.

20 - What are you currently working on?
I’m working on finishing up the edits for The Conjoined, and I’m also writing a book about the Gus Van Sant film, My Own Private Idaho. And I’m chipping away at that elusive poetry collection.