Collier Nogues, The Ground I Stand On Is Not My Ground

The road at early dawn is still here—

I am in the future.

I move my hand
to raise its flag
in the yard. The
quietness

on the surface is breaking

bringing about the form of a person

his ear. (“A Book of Patriotic Movements”)

American poet Collier Nogues’ second poetry collection, The Ground I Stand On Is Not My Ground (Chester CT: Drunken Boat, 2015), winner of the 2014 Drunken Boat Poetry Book Contest as judged by Forrest Gander, is a curious reclamation project in a series of recent reclamation projects. One could point to Vancouver poets Jordan Abel, Reneé Sarojini Saklikar and Cecily Nicholson as comparable examples of poets utilizing varying degrees of erasure and documentary to re-claim a series of lost histories, disasters and cultural spaces, for works such as The Place of Scraps (2013) [see my review of such here], Un/inhabited (2014) [see my review of such here], children of air india (2013) [see myreview of such here] and From the Poplars (2014) [see my review of such here]. Nogues, a creative writing teacher in Hong Kong and poetry co-editor for Juked, utilizes erasure and a deft hand to step lightly from phrase to phrase, poem to poem, exploring the nature of and the direct result of a specific armed conflict. As she writes as part of her too-brief opening note: “This book is a hybrid of poetry and digital art. The poems erase historical documents related to the development and aftermath of the Pacific War, especially on the island of Okinawa.”

Towards the worst. In that battle-field
a hundred women.

We dreamed of going to wash their
whole bodies

their modesty crowded in and out of
bed

The illusion was typical,
base.

with open arms,
welcoming all unfortunates. (“Across the Plains”) 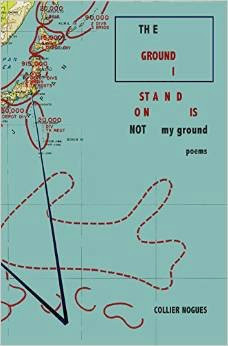 In one of the blurbs on the back cover, Craig Santos Perez presents us with information that might be seen as important for the context of the collection: “Collier Nogues, who grew up on a U.S. military base in Okinawa, explores how war has shaped the island of her childhood. Taken together, these poems not only express a desire to erase violence, but they also attempt to map the topography of islands and nations, caves and embrasures, weapons and flags, grace and dread.” As the notes at the back of the collection inform, she extracts her poems from works such as Gladys Zabilka’s Customs and Cultures of Okinawa (Revised Edition) (1959), Robert Tomes’ The Americans in Japan (1857), Kwaidan: Stories and Studies of Strange Things (1904), Aikoku Undo Nenkan (Yearbook of Patriotic Movements) (1936), Edgar Rice Burrough’s Tarzan of the Apes (1916), A Japanese Interior (1893) and Robert Louis Stevenson’s Across the Plains (1902), attempting to explore “the discourses of empire” to reclaim a space, using, quite often, the words of the oppressor directly in opposition to their original purpose. “I / will explode any day now.” she writes, in the poem “Dear Grace.” There is such a lovely lightly touch across Nogues’ lines and phrases, skipping across the surface of reclaimed text while retaining and repurposing an incredible depth.