The Collected Poems of Chika Sagawa, translated by Sawako Nakayasu

PLEASE COVER ME WITH DIRT EVERY YEAR

Listlessly walking silently,
Clinging to the honeysuckle on the hedge
Crouched beside the road
O, decrepit old winter –
The hair on your head has dried
And those who walked upon it
Have died too, along with their memories

The Collected Poems of Chika Sagawa, translated by Sawako Nakayasu (Canarium Books, 2015) is the first comprehensive collection by Japanese poet Chika Sagawa (1911-1936) available in English translation. In a recent review of the book over at Heavy Feather Review, AK Afferez writes: “[T]his first comprehensive collection of Sagawa’s poems and prose—diary excerpts, notes and reviews, vignettes that read like prose poems—reveals a complex and assured voice, one in constant expansion, always seeking new poetics.” As Nakayasu opens her introduction:

Sagawa Chika was Japan’s first female Modernist poet, whose work resonated deeply with, and helped shape, the most dynamic shifts and developments in the poetry of the era. She was a singular and remarkably inventive poet who had developed a poetics influenced by French literary movements as they were imported to Japan, English and American Modernist writers whose work she translated, and contrasts between her nature-filled upbringing and cosmopolitan Tokyo. Despite her death in 1936 at the young age of 24, it is impossible to overstate the importance of her remarkable oeuvre, which was created in less than six years of poetic production during one of the greatest social and cultural shifts of her nation’s history. 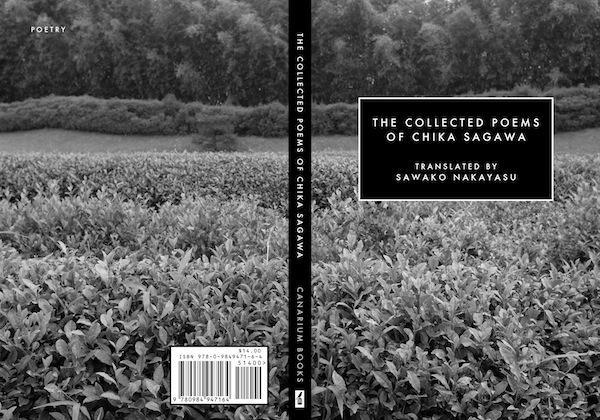 In her lengthy introduction, Nakayasu, a remarkable poet in her own right [see my review of her most recent collection, The Ants, here], goes on to describe Sagawa’s career cut short through a number of factors, including her early death, being female in a male-dominated field, and the advent of the Second World War:

Chika’s early death, along with the effects of World War II, did not help her work find a strong foothold in literary history. For the writers who lived through the war, however, it created a special set of difficulties. In addition to the general strain that the war placed on everyone, an FBI-like organization called the Tokubetsu Kōtō Keisatsu, also known as the Shisō Keisatsu or “Thought Police,” had taken to arresting writers and intellectuals whose work was deemed unpatriotic. Poets were pressured by the government to prove their loyalty by writing patriotic verse.

Her introduction is essential reading, and provides a fascinating overview of Sagawa’s life and work, and the factors that led to her work being forgotten, and later rediscovered. At nearly one hundred and forty pages, the range of the collection is remarkable, even moreso when one considers it was created in the space of some six years, until the author’s death at twenty-four. This is a work of poems, journals, short prose pieces and diary entries by someone remarkably mature and curious, stretching out the possibilities and energies of youth into something contemplative and knowing. Her poems, stretching between the lyric and the prose poem, are meditative and incredibly immediate, and read as remarkably contemporary, articulating a relationship between nature and the body, the smallest and simplest examples of beauty, the possibility of failure and a shadow of death that runs across and through the entire collection:

In the early evening the sun dies alongside the ocean. The waves are unable to catch the clothes that float away after them.

The ocean builds a blue road from the vicinity of my eyes. Countless gorgeous corpses are buried below it. Annihilation of a band of tired women. There is a boat that hurriedly covers its tracks.

There is nothing that lives there.