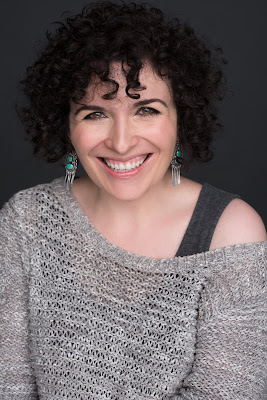 Jehanne Dubrow is the author of four poetry collections, including most recently Red Army Red and Stateside (Northwestern UP, 2012 and 2010).  Her first book, The Hardship Post (2009), won the Three Candles Press Open Book Award, and her second collection From the Fever-World, won the Washington Writers' Publishing House Poetry Competition (2009).  In 2015, University of New Mexico Press will publish her fifth book of poems, The Arranged Marriage. She has been a recipient of the Alice Fay Di Castagnola Award from the Poetry Society of America, the Towson University Prize for Literature, an Individual Artist's Award from the Maryland State Arts Council, a Walter E. Dakin Fellowship and Howard Nemerov Poetry Scholarship from the Sewanee Writers' Conference, and a Sosland Foundation Fellowship from the Center for Advanced Holocaust Studies at the U.S. Holocaust Memorial Museum. Her poetry, creative nonfiction, and book reviews have appeared in The New Republic, Poetry, Ploughshares, The Hudson Review, Prairie Schooner, American Life in Poetry, and on Poetry Daily and Verse Daily. She serves as the Director of the Rose O’Neill Literary House and is an Associate Professor in creative writing at Washington College, on the Eastern Shore of Maryland.

1 - How did your first book change your life? How does your most recent work compare to your previous? How does it feel different?
I think, like many poets, I found that I was able to turn my attention to new work once that first collection had found a home. I could simply put those early poems behind me and move on.

Each one of my books has a distinct narrative and, as a result, a distinct form (yes, I’m talking about the old saw of form mirroring content). So, for instance, although I’m often described as a poet who works in traditional forms, my next book—The Arranged Marriage—is a linked sequence of prose poems.

2 - How did you come to poetry first, as opposed to, say, fiction or non-fiction?
I drafted my first poem when I was eleven-years-old and dabbled in poetry from then on. When I was 22, I went through a really sad break-up (with the man who eventually became my husband), and that’s when I began to write poems more seriously. I wrote an Elizabethan sonnet everyday for a year and, when I was 23, I called my parents and told them, “I’m going to be a poet. I’m going to go to graduate school to get something called an ‘MFA.’”

3 - How long does it take to start any particular writing project? Does your writing initially come quickly, or is it a slow process? Do first drafts appear looking close to their final shape, or does your work come out of copious notes?
It really depends on the project and the poem. In general, I find that the early poems in a manuscript come quickly, in part because they access the easiest or most obvious observations about their subject matter. The later poems take longer but are frequently more interesting because they have to move beyond the undemanding metaphors and images toward more nuanced conclusions.

4 - Where does a poem usually begin for you? Are you an author of short pieces that end up combining into a larger project, or are you working on a "book" from the very beginning?
My poems frequently begin with sound. I’ll hear, in my head, a line that delights me—even if I don’t understand its logic or its narrative impulse—and then follow the music toward meaning.

The poems in my last few collections (Stateside, Red Army Red, The Arranged Marriage) presented themselves to me as books almost immediately. I wrote a few poems and could tell that they belonged to larger narratives, full-length collections whose stories I wanted to tell.

5 - Are public readings part of or counter to your creative process? Are you the sort of writer who enjoys doing readings?
I started out in the theater. So, I’m very comfortable giving readings and enjoy the transition between page and stage. That said, I don’t view readings as a part of my writing process; the poems an audience loves are often not one’s best work, and it’s unwise to use audience response as a way to gauge a poem’s significance or accomplishment.

6 - Do you have any theoretical concerns behind your writing? What kinds of questions are you trying to answer with your work? What do you even think the current questions are?
I’m interested in the ways poems function both as discrete units and as intersecting, overlapping texts in the metanarrative of a book. They’re particles and waves. I believe in mimesis and am always trying to understand more fully the way form mirrors content and content form.

7 - What do you see the current role of the writer being in larger culture? Does s/he even have one? What do you think the role of the writer should be?
I spent a large portion of my childhood in Communist-era Poland, a place where writers and other artists thought very deeply about their role in and duty to the larger culture. Sometimes these kinds of thoughts energized their work but, in the last days of the Cold War, as it became clear that soon the old enemy would be gone or toppled, these kinds of concerns paralyzed many in the intelligentsia.

In general, I try not to reflect to frequently on these sorts of questions, because I find them distracting. My work is most successful when it resides in the specific, the realm of taste and touch and smell and sound and sight. Phrases like “the current role” and “larger culture” are anything but concrete or physical.

8 - Do you find the process of working with an outside editor difficult or essential (or both)?
I love working with editors. I like when editors asked me to explain or justify my choices. When we can articulate our decisions as writers—why we’ve picked this word and not another, why we’ve broken the line here and not here—that’s when we know our work is rigorous, that it’s built both on sound and on good sense.

9 - What is the best piece of advice you've heard (not necessarily given to you directly)?
It’s not a piece of advice, but I appreciate that so many poets speak about “the craft of writing.” In another life, I would have gone to art school to study textiles and would have become an art quilter. I like the idea that poems are things requiring our hands, our time, our labor. Like a quilt or a well-constructed walnut chair or a thrown clay pot, a poem can be both beautiful and useful. We apprentice ourselves to the craft. We bow our heads, acknowledging that we come from a long line of craftsmen who made many beautiful, useful things before us.

10 - How easy has it been for you to move between genres (poetry to creative non-fiction to critical prose)? What do you see as the appeal?
There’s a reason so many poets also work in nonfiction; writing a poem has a lot in common with writing a lyrical essay or even a piece of critical prose. All of these texts can think associatively, can make interesting intellectual leaps, can bring together a first-person point of view and the intellect.

Genre-jumping is also a great way to avoid boredom.

11 - What kind of writing routine do you tend to keep, or do you even have one? How does a typical day (for you) begin?
I write everyday: drafting, revising, editing, researching. I like to joke that I’m a shark; I have to keep swimming, or I’ll die. Sometimes I write in the morning, sometimes in the evening. But I always write.

12 - When your writing gets stalled, where do you turn or return for (for lack of a better word) inspiration?
I don’t believe in writer’s block. When one project isn’t working, I turn my attention to another. I always have several manuscripts in progress, and I have a big list of tricks or games that I use to keep the work moving. I love writing imitations. Ekphrasis also works well for me; just the act of description—describing a work of art—is a great technique for generating words and for turning my attention away from the kinds of anxieties that can so cripple a writer.

13 - What fragrance reminds you of home?
I love this question, because I just co-edited an anthology about fragrance, The Book of Scented Things: 100 Contemporary Poems about Perfume.

At the same time, this question is one I can’t answer. I’m the daughter of American diplomats and moved every three to four years, throughout my childhood and adolescence. I was born in Italy, and grew up in Yugoslavia, Zaire, Poland, Belgium, Austria, and the United States. Even though I’ve now lived on the Eastern Shore of Maryland for seven years, I wouldn’t call it home.

14 - David W. McFadden once said that books come from books, but are there any other forms that influence your work, whether nature, music, science or visual art?
One of the poetry collections I’m currently drafting is called Stories of the Great Operas, which centers on my father’s passion for opera. I’m learning that it’s really hard to write poems about music. In the past, I’ve frequently written about paintings and photography and food, lots of food (come to think of it, the kitchen table is probably the closest place I know to home).

16 - What would you like to do that you haven't yet done?
I want to write a how-to book on the use of imagery in poems. I hope to write a collection of children’s poetry. I would like to write a novel or a book of linked short stories. I want to collaborate with a composer on a traditional, American musical.

17 - If you could pick any other occupation to attempt, what would it be? Or, alternately, what do you think you would have ended up doing had you not been a writer?
I was always torn between becoming a writer, an actor, and an artist. I’m grateful that I decided against a life in the theater. But I still love the visual arts and would have loved to have studied graphic design, which I still dabble in, as part of my work directing the Rose O’Neill Literary House and overseeing the Literary House Press.

18 - What made you write, as opposed to doing something else?
I don’t know. Maybe it all goes back to the year I turned 22 and that sad break-up. Maybe, at the time, poems were a more accessible outlet for my hurt than was the stage or the artist’s studio.

19 - What was the last great book you read? What was the last great film?
I recently reread Maggie Nelson’s Bluets and thought it was every bit as wonderful as I remembered it to be. The other night, I found myself watching The Lives of Others, for the third or fourth time, and felt grateful again for the fact that not every movie is Transformers or The Fast and the Furious.

20 - What are you currently working on?
I’m working on two books of poems, Stories of the Great Operas and Dots and Dashes. I’m also drafting a series of essays—I call them “meditative close readings”—about Philip Larkin. And I’m co-editing a new anthology, Still Life with Poem: 100 Natures Mortes in Verse.