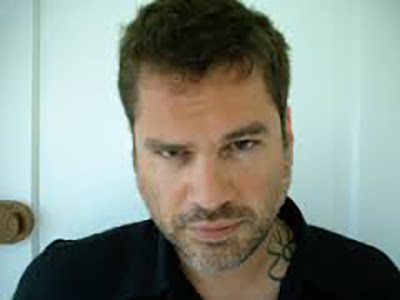 Like so many, I’m stunned to hear of the death of American poet Noah Eli Gordon, author of over a dozen poetry books over the past two decades, including The Frequencies (Tougher Disguises, 2003), The Area of Sound Called The Subtone (Ahsahta Press 2004), INBOX (BlazeVOX, 2006), Figures for a Darkroom Voice (with Joshua Marie Wilkinson; Tarpaulin Sky, 2007), A Fiddle Pulled from the Throat of a Sparrow (New Issues, 2007), Novel Pictorial Noise (Harper Perennial, 2007), The Source (Futurepoem Books, 2011) [see my review of such here], The Year of the Rooster (Ahsahta Press, 2013) [see my review of such here], Is That the Sound of a Piano Coming from Several Houses Down? (Solid Objects, 2018) [see my review of such here] and The Word Kingdom in the Word Kingdom (Brooklyn NY: Brooklyn Arts Press, 2015) [see my review of such here], as well as numerous chapbooks. He was a prolific reviewer and critic (I think he even reviewed the Kate Greenstreet above/ground press chapbook for Rain Taxi), the editor/publisher of Letter Machine Editions and most likely a whole slew of other things I either can’t recall or don’t know, as well as a singular presence on the literary scene. His was stoic and solid confidence across uncertain terrain, composing thoughtful poems that went to the most unexpected places, and rocked the foundations of what made poems possible, and confused those who wished for more straightforward or flashy language.

I first encountered a selection of Gordon’s work (I can’t recall if I caught a stray poem or two in a journal, prior to this) through the since-late Peter Ganick being good enough to mail me, circa January 2006, a copy of a chapbook of Gordon’s he’d produced, twenty ruptured paragraphs from a perfectly functional book [see my review of such here]. It was Gordon’s subsequent chapbook, winner of the 2007-2008 Pavement Saw Press Chapbook Award, Acoustic Experience (Pavement Saw Press, 2008) [see my review of such here], that really struck my attention, and prompted me to take his work far more seriously. The chapbook included a piece that stayed with me for years, the tone and structure of which I attempted to replicate repeatedly, without luck:

An Old Poem Embedded In A Final Thought on the Airplane

About five years ago, I wrote a short poem called "Yesterday I Named a Dead Bird Rebecca". The title came to me while in Florida visiting family. Going for a short walk, I passed the carcass of a crow swarming with small flies. There was something so repugnant about this particular dead animal that, although oddly aware of its lack of any sort of odor, I was, nonetheless, overcome by a strong, debilitating nausea, one which I suspect arose simply from the smell I imagined the bird to have. The poem reads:

were a defused heart
wintering the clock

I'd call flight
a half-belief in air

a venomous lack
when the ticking is less so

What could be more obvious than that this poem transposes its prepositional way of understanding gravity into the structure of its own identity? Something that lies beyond its lone sentence speaks to me now as the kind of nostalgia one feels upon watching an airplane pass overhead. It means making distance disappear.

Gordon and I interacted occasionally over the years, whether his ’12 or 20 questions’ interview in 2007, or through above/ground producing a chapbook of his (with accompanying artwork by Sommer Browning) a few years later. I admired the seriousness of his approach through lyric play, including his experiments through repetition, composing entire manuscripts of poems that each held the same title; it’s a bold experiment if it doesn’t work, and through Gordon, it provided some incredible possibilities. If you don’t know his work, I would recommend seeking it out, especially some of those last few titles. His absence will leave a considerable space, and I am sad for it, especially knowing he leaves a young daughter. I can’t imagine much worse.

There is currently a space for donations to offer support Sommer Browning and their daughter Georgia. Please help if you are able.