Brian Foley, There Must Be A Reason People Come Here

I hear the people
who walked here.
I hear it and then you
hear it too.
On the road,
the yellow leaves
coming to an end
never drop, stretching
out their change
with something bright
to mark their bodies
from the black grass.
Here is what we know.
This is the music
they would listen to.
They were addicts.
Here is what we know.
We’re not crazy.
Our instruments
are impaired.
Far from civilization,
we’re not where
we’re supposed to be.
So here we are.
And this meeting
is officially
about the possibility
of turning back. 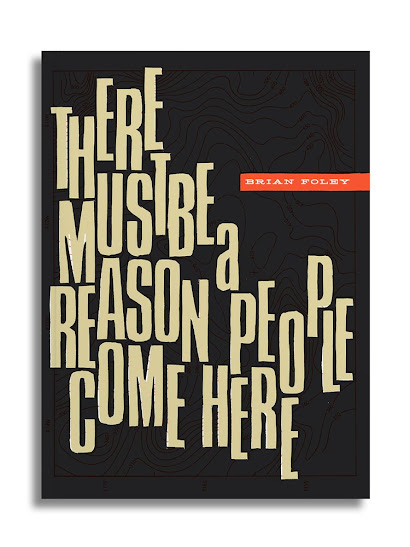 Denver-based poet and musician Brian Foley’s second full-length poetry collection, following The Constitution (Boston MA: Black Ocean, 2013) [see my review of such here] is There Must Be A Reason People Come Here (Black Ocean, 2022), a collection of poems that explore the push and the pull of lyric form, composing poems of short lines that accumulate down the page to poems with longer couplet lines, to longer burst of sketched-out fragments and sequences. “By ear I mean / I can’t sleep without it,” he writes, as part of the short sequence “FIVE ACCOMLISHMENTS OF DESTINY,” “& though I haven’t been able to prove it / if there are rules, it is not music.” The lyric composed via single-stanza stretches of short lines is something that seems to exist as an American thread, having noticed similar works by other contemporary poets such as Bianca Stone, Hailey Higdon, Emily Kendal Frey, Emily Pettit and the late Hillary Gravendyck, each of whom seem to share Foley’s predilection, as well, for their subversion, discomfort comfort and use of the straight phrase. “It gets so you feel / these things totally alive / inside of a crime / uncommitted,” he writes, as part of the five-page poem “HOMEWRECK,” “just / like the dusk forgot / how to spell me, now / just a collapse I plow into.”

A poet of occarional observational contradiction, Foley writes an underlying anxiety while attempting to survive and thrive through capitalism. “Unlike,” he writes, as part of “FLINT,” “the money I // can’t drink / but connect with / what color my / eyes are [.]” His lyrics seek answers, although more clarification than resolution, navigating through the complexities of contemporary living through big ideas and small moments. “There is a traffic / light hanging / in Mass,” he writes, to open the poem “PLUGS,” “no one has ever been through/ that has never turned red / on itself [.]” Or, simply put, as the final stanza of the three-page “from THE MAKING OF A MYTHANTHROPE” reads:

This isn’t a story.
I am writing out what I can’t find.
Ask me at my death who it is
that I love. I would like to know.