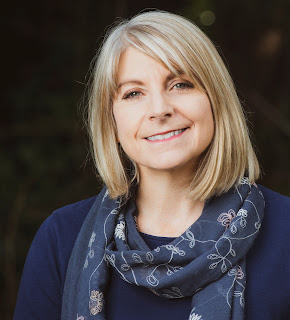 Frances Peck (North Vancouver) is a long-time editor, ghostwriter, and instructor. She’s the author of Peck’s English Pointers, an online grammar and writing resource; a co-author of the HyperGrammar website; and an occasional essayist and blogger. She wrote fiction and poetry until her early twenties, when she stopped (ironically) to earn a living from words. Now she’s rediscovering the magic of making things up. Her debut novel is The Broken Places (NeWest Press, April 2022). Connect with Frances on Twitter (@FrancesLPeck) or visit her website (francespeck.com).

Confusingly, the first novel I wrote, Uncontrolled Flight, will be the second one published, in fall 2023; the second novel I wrote, The Broken Places, is the first to hit the shelves. Regardless, to have a novel, any novel—first, second, fifth—published, with my actual name on it (not ghostwritten) is the realization of my oldest, most secret dream. Oldest because I started cranking out the beginning chapters of novels around age nine. And most secret because until recently I couldn’t admit to anyone that I wanted to write a novel. It felt like something I could never do, that I wasn’t worthy of. Other people wrote novels. Not me.

It was a kind of imprinting. In grade three, the teacher gave several of us who were easily bored these story prompts to work from. They were all about—at least, this is how I remember it—dustballs or hairballs or furballs. Something slightly nasty and clumpy and not quite human. We were to write stories about these balls as if they were people. It was the most stimulating thing I’d done up to that point, apart from reading and cutting pictures out of catalogues. For the next fifteen years, I wrote a steady stream of short stories, novel chapters, comic strips, magazines, school newspaper articles, plays, and poems. I kept coming back to poetry. I had a couple of poems published in my university’s literary magazine. But I was a terrible poet. Everything sounded like fake Yeats. (That sounds like a band name: Fake Yeats.)

After that, I made a career from writing and editing non-fiction, or what nowadays we’d call “content”: reports, marketing material, training manuals, essays, web copy, and so forth. All the while, the word “novel” kept sounding in my head. As a young writer I’d made many stabs at novels, but I’d never finished one. I desperately wanted to finish one.

I’m a slow starter. The image that precipitated my first novel, the one that will be published second, haunted me for years before I started to write. There’s always something more pressing, and frankly more appealing, to do than churn out that painful first draft. But once the draft is done, the editing can begin. After years of being an editor and teaching editors, I feel great relief when I get to that stage. The two novels I’ve finished so far have needed heaps of reshaping, because I’m a pantser all the way. It’s inefficient, but I don’t care. For whatever reason, rigorous outlining kills the magic for me.

Leaving aside my freelance work, which has usually involved shorter pieces, my projects are always books. Novels are all I’m interested in writing just now. I wish it were otherwise. At one point I tried to convince myself to write a short story, just for the satisfaction of finishing something in less than, say, two years. But stories don’t come to me. Novels do.

Ask me in a year! At the time of writing, with my book officially out under a month ago, I’ve done a grand total of three readings: two online, one in person. Though it’s scary to say my own words out loud to a crowd, I suspect I’ll learn to enjoy readings. In my family we were made to read aloud, and to memorize poems and recite them for unsuspecting visitors. I did stuff like debating and drama and deejaying on campus radio, and I’ve been an instructor and presenter alongside my writing and editing career. I’m pretty comfortable with public speaking. There’s a spark you get from a live audience that’s unlike anything else.

All I want to do is write books about interesting characters doing interesting and at times unexpected things. That’s it, really.

Again, this isn’t something I think about, at least not in connection with myself. No question, there are writers out there doing influential, world-changing things with their work—interrogating culture, dismantling stereotypes, posing key political and philosophical questions, amplifying stories and voices that have historically been stifled. I’m not one of them. I’d just like to write stories that keep people reading and that make them feel something.

Editors are my tribe. I adore working with them; they are like ER doctors for manuscripts. My editor at NeWest Press, Leslie Vermeer, and I co-wrote a blog post about what it’s like for one editor to be edited by another. Outside editors are indispensable. It’s the interior editor, the one battling the writer inside my head, that’s the troublemaker.

BIC: bum in chair. Writer, instructor, and retreat organizer Ruth E. Walker handed me that nugget years ago. Get your bum in the chair, and do it regularly. That’s most of the battle. Once you’re there, the writing will come.

I usually set weekly and daily goals, but they vary a lot depending on what else is going on in life. Right now I’m aiming for three one-hour sessions a week on my new novel. In the past, I’ve set page quotas. A few months back I did adopt one routine, which is to do accountability check-ins with another writer. All we do is message one another to say “did my first session,” “did my second,” etc. There are many, many days when I wouldn’t write a word if not for that arrangement.

It’s only now, chipping away at my third novel while promoting my first and getting ready to revise my second, that I’ve begun to feel stalled. How to get going again? Probably I should read the answer to this question in all your other interviews! More and more I’ve been turning to non-verbal inspiration, like music. I’ve listened to Radiohead’s In Rainbows scores of times hoping that the trance it puts me into will result in some number of words on the page. I’m also collecting images that match the time frame of the story I’m struggling with and that make me think of the characters. I use Padlet, a free app that lets you to create a corkboad you can stick pictures on. It’s like Pinterest, but private.

Salt cod. My dad would always have leathery slabs of it soaking in a pail just inside the back door. This was in rural Cape Breton. When we’d come crashing in from the school bus, leaving the fresh air behind, it was often the first thing we’d smell. That and his hand-rolled Player’s cigarettes.

Music for sure. There have been times in my life, like back when I deejayed or tinkered with the piano or played (rudimentary) bass in a basement band, when music has meant as much to me as books. Film is a huge influence too. Less now, when movies are all about comic book characters and merchandise, but good films, like gritty 1970s movies or classic screwball comedies or really scary horror flicks—they are hugely inspirational.

That is a list I can’t begin to compose. I read all the time, and nearly everything feels important while I’m reading it. I try to read widely. I gravitate toward Canadian books more than anything, but I try to keep up with works from other countries too. Fiction and non-fiction. Well-written literary works and fun genre stories. Books mostly, but magazines as well, and blogs sometimes.

Go to England. I did a master’s in English literature, but I’ve never set foot in England. I want to see the moors and the Cornish coast, the hills and dales, all those places I’ve only ever read about.

I’d have given just about anything to sing well. To be a great, belt-it-out singer like Aretha Franklin or maybe Janis Joplin (without the drugs and untimely death). Though that’s not really what you asked. I guess if I hadn’t become a writer and editor, I’d have been a librarian, ideally in a bookmobile. Books would have to be involved.

Part of it, probably, was growing up in a rural area where there wasn’t much to do. I remember being bored a lot except for when I was reading, and writing seemed a natural extension of reading. Part of it was having little money. There weren’t going to be lessons of any kind, or entertainment that involved fees. Writing cost nothing and it was absorbing and it gave me a break from reading. It whiled away the endless Sunday afternoons. I wrote stuff from such an early age that I guess it just stuck.

I really enjoyed Karen Hofmann’s linked novels What Is Going to Happen Next and A Brief View from the Coastal Suite. And I was transfixed by Deep Water, a 2006 documentary about a sailing race that is more character study than adventure film (though there’s plenty of adventure).

My third novel. It’s coming out in such hiccups (see question 11), but I’m doing my best to keep at it. It’s about childhood friendship and music and betrayal, and about the fallibility of memory, how impossible it is to ever know the truth of things.

Posted by rob mclennan at 8:31 AM
Labels: 12 or 20 questions, Frances Peck, NeWest Press