Dustin Pearson, A Season in Hell with Rimbaud: Poems

A Season in Hell with Rimbaud

I dreamt I was showing my brother around in Hell.
We started inside the house.
Everything was brown besides the white sheets
in the bedrooms. I let him look
outside the window, told him it was hottest there,
where the flames rolled against the glass,
as if a giant mouth were blowing them,
as if there were thousands caught in the storm,
pushing it onward with mindless running,
save a desperation for something else.
How had there been a house in Hell
and we invited with time to spend? Why was it
I hadn’t questioned how I got there? My brother
growing so tired from the heat, the sweating?
surely we could open the door, he said. Surely there’ll be
a breeze. Even seeing already, even burning himself
on the doorknob. His eyes turned back in his head
working his way to the bedrooms, straining
the sheets with his blistered hands, and though I knew the beds
weren’t for the rest of any body, I sat by and let him sleep. 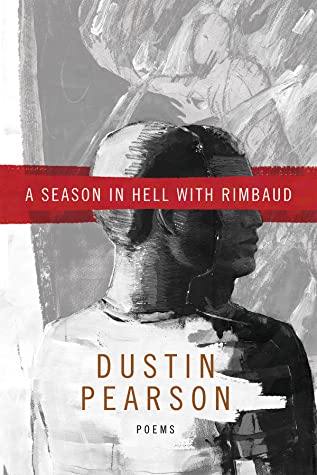 The third full-length poetry collection by Tulsa, Oklahoma poet Dustin Pearson [see my 2018 ’12 or 20 questions’ interview with him here], following Millennial Roost (C&R Press, 2018) and A Family Is a House (C&R Press, 2019), is A Season in Hell with Rimbaud: Poems (Rochester NY: BOA Editions, 2022). Pearson writes of brothers, masculinity and borders, and of a fear and vulnerability that is deeply felt throughout the collection. “Hell is a state of mind I slipped into / years ago,” he offers, to open the poem “Regardless,” “tossing a red balloon / to my brother. Even then, // I’d never be able to do what he couldn’t. / I’d always fall short of what he could do. / I couldn’t convince myself // I went because I loved him.” There is such a sense of music and rhythm to these lyrics, such a sense of singing punctuated by trauma. Pearson’s narrator writes his brother and a dream of his brother, writing a journey through Hell and how he got there, seeking out a beloved sibling, and mourning a loss he refuses to let go of. “He was the first person who told me I stood out,” he writes, as part of “Pain on a Soft Surface,” “something my mother had tried to, lovingly, / make me feel, something my father denied / completely. I resigned myself to the idea. / In a man’s world, I’d never be anything, / even if I’d still be forced to compete.”

“Every body that hits the ground in Hell / will get up should they choose it.” Pearson writes, to open the poem “Lying Down,” “There’s plenty of death and destruction / but no dead.” Composed in six sections of narrative lyrics, the poems in Pearson’s A Season in Hell with Rimbaud: Poems are searching, desperate and impossible, and the lengths through which this narrator would travel. “I cast a wide net in Hell for my brother. / I was both the person who held the net / and the bait inside,” he writes, to open the poem “Hell’s Wide Net,” near the end of the collection, “my arms craning / back and throwing forward, letting / the string reel through my hands.”