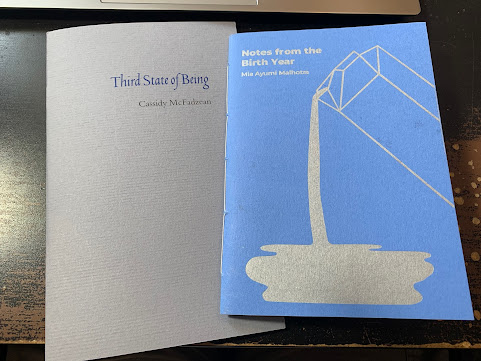 August, already. All I can do is remind you: check out periodicities: a journal of poetry and poetics, the new issue of which starts posting today! And you remember that above/ground press is holding a 29th anniversary big ridiculous sale this summer, yes? And I'm still selling copies of this new poetry book of mine! So many exciting things!

San Francisco CA: Following her full-length debut, Isako Isako (Alice James Books, 2018), and winner of the 2022 BOOM Chapbook Contest is Bay Area poet Mia Ayumi Malhotra’s charming and utterly striking Notes from the Birth Year (bateau press, 2022), a suite of lyrics that write out elements of new motherhood, and connecting deeper to a lineage; the threads that begin to open fully and further across both genealogical directions. “With this telling,” she writes as part of “On Mind and Memory,” “I am weaving her an origin story—one in which, I realize, / I am incidental. This is about her, not me.” Hers is a lyric simultaneously casual and crafted, set as sketched notes on the possibilities of newness and connectivity around having a small child. These poems are remarkable for their intimacy and their scale, written across and through distances great and small, long lines of calm, hesitation and memory, reaching out into a new way of seeing what was already there. “Strange,” she writes, as part of “On Gestation and Becoming,” “how what is closest most eludes us.” She composes poems that engage with the emergence through their own possibilities, seeking to connect poetic form and structure with an openness that having a growing child allows. As the poem “On Form” begins:

I became a mother and I began to write like a Japanese woman.

Things That Are Distant Though Near: Festivals celebrated near the Palace. The zigzag path leading up to the temple of Kurama.

When I became a mother, my lines began to grow less mannered, less sculpted—and this wild, itinerant prose did not adhere to shapeliness.

Instead it spilled from birth into death and questions of beauty and my opinions about this and that, arranging itself as it wished.

An unruly, yet artful text.

Kentville NS: From Regina-born and Brooklyn-based Canadian poet Cassidy McFadzean, the author of the full-length collections Hacker Packer (McClelland and Stewart, 2015) and Drolleries (McClelland & Stewart, 2019), comes the chapbook Third States of Being (Gaspereau Press, 2022), a title composed as “a crown of sonnets written for my mother, Catherine Mae McFadzean (née Warriner), who was born May 29, 1957, and died September 24, 2020.” Admittedly, I had to look up the specific term, as the Poetry Foundation website offers: “The sonnet redoublé, also known as a crown of sonnets, is composed of 15 sonnets that are linked by the repetition of the final line of one sonnet as the initial line of the next, and the final line of that sonnet as the initial line of the previous; the last sonnet consists of all the repeated lines of the previous 14 sonnets, in the same order in which they appeared.” As her poem begins: “The way loss ricochets through memory / altering every moment that preceded / Those left behind forever changed by it / with renewed engagements tending / ever loyally to the earth and its labours / like caretakers in the palace gardens [.]”

There is a curious language to her elegy, one that seeks a particular crafted phrase, accumulating line upon self-contained line until the lines begin to narratively collage into a larger shape. She writes her elegy slant against the loss of her mother, attempting to articulate points through the loss and the very notion of scattered, shuffled memory through shuffled language. Each step is both the same and not the same, all of which ends up in that particular spot.

Galloping off and never turning back
Was your death swift and unexpected
because a long and drawn-out illness
would have destroyed me, unable to rise
to the occasion? In the night I berate myself
with circular thinking: if we’re only given
what we can handle is it my fault for being
too weak to bear your suffering?

I search through pages of histopathology
to find the arteries of your heart calcified
A pink marbling on the tissue slides
tiny cells became lilac buds in a river
floating downstream, almost beautiful
with knowledge the invisible will betray