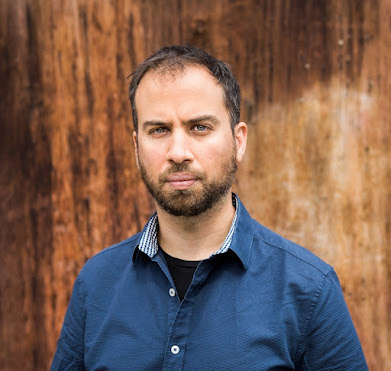 Aaron Kreuter [photo credit: Rick O'Brien] is the author of the short story collection You and Me, Belonging (2018) and the poetry collection Arguments for Lawn Chairs (2016). His writing has appeared in places such as Grain Magazine, The Puritan, The Temz Review, and The Rusty Toque. Kreuter lives in Toronto and is a postdoctoral fellow at Carleton University. Shifting Baseline Syndrome is his second book of poems.

I’d say the main way my first book changed my life is that I now had a book out in the world, not to be too tautological about it. It gave me the space and clean slate to being working on new poems, new books. The poems in Shifting Baseline Syndrome, my second collection of poems, are more energetic, more flippant, more desirous, and more frisky than my earlier work.

Poetry has been an annoying friend since earliest childhood. I couldn’t get away from it if I tried.

As for many aspects of writing for me, it is entirely dependent on the project. Some poems take weeks, months, years, to germinate, root, stalk, and flower (if flower it ever does). Sometimes I write down a title for a poem, and come back to it years later (or not at all). Sometimes a poem falls out of me like a piece of blowdown in the forest. It could be years between poems, or minutes.

Since the first book of poems (Arguments for Lawn Chairs, available in my basement), I have more or less written towards a project. This doesn’t mean anything more than the book is in mind as I write, out there, in the future.

I definitely enjoy readings. I remember the first time I read publicly—in Montreal, for one of my first publications, at Concordia’s undergraduate journal Soliloquies. I was terrifically nervous. But I went on stage, and I did it. I never thought I’d be the kind of person who could just go up on stage and perform, but apparently I can be, and I am. I’m looking forward to in-person readings starting up again, I enjoy the energy of, and interaction with, an audience.

I’d say that behind any one poem, story, or longer piece I write is a frothing ocean of idea, concern, rage, and love. Unless, of course, I’m just trying to be funny. An all-star list of some of the theoretical concerns of Shifting Baseline Syndrome would have to include: the metaphysics of television; the destruction of the world; what I enigmatically refer to as “Jewish stuff”; heritage, legacy, family; and acid trips in portapotties.

The writer, mostly, is here to make fun of the powerful, to disrupt, to shake up and shake off, to celebrate and complain. Or, you know, whatever.

Both. Or one or the other, depending on the project, the editor, and the ebb and flow of my moods.

To always take care of your shoes.

10 - How easy has it been for you to move between genres (poetry to short stories to creative non-fiction to the novella)? What do you see as the appeal?

I’ve never had much trouble moving between genres. For me, each project is its own genre.

I write most days. But, that being said, I’m a firm believer in the fact that the mind is always working.

Bowties and kasha (though that’s really my grandmother’s home).

I recently reread The Dispossessed by Ursula Le Guin, and it rewired my brain once again. Amazing how in each reading I focus on a different aspect. I also just read Matrix by Lauren Groff, which is absolutely, absolutely fantastic.

I’m finishing up a draft of a novel, called Lake Burntshore, that takes place at a Jewish summer camp in Ontario, and is about settler colonialism, Jewish stuff, and the land. There’s also a new batch of poems slowly working its way up from the deep.

Posted by rob mclennan at 8:31 AM
Labels: 12 or 20 questions, Aaron Kreuter, University of Regina Press