As another appraisal of the commonwealth, “Lake Superior” extends a tradition that seems particular American: it’s a tradition we honor only partway. For the truth is, when our poets start telling us about gneiss, or land and air, when they locate their story in stone or, as Niedecker does, in rock, I think we are likely to allow them the trope but not likely to believe they are saying what in fact they just said. They and their poems are made of land and air and rock. People who read poetry have always been alert enough to entertain the trope while avoiding the notion itself as sentimental, romantic, or worse, perniciously near to nationalism.
Get them away from poetry, however, and today’s readers are also alert enough ecologically to know that their own identification with the environment isn’t ipso facto proof of direct-mail mysticism or gang nationalism. (“Niedecker and the Evolutional Sublime”) 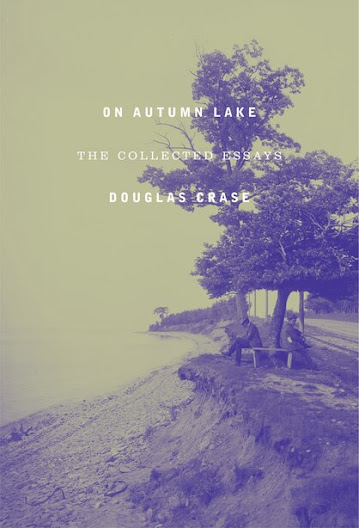 Moving my way through the stunning new collection On Autumn Lake: The Collected Essays (New York NY: Nightboat Books, 2022) by American poet and critic Douglas Crase, I had foolishly presumed I hadn’t actually heard his name prior to this, only to discover I’d read his essay “Niedecker and the Evolutional Sublime,” included as part of the late Lorine Niedecker’s Lake Superior (Seattle WA/New York NY: Wave Books, 2013) [see my review of such here]. As the press release for On Autumn Lake: The Collected Essays offers: “On Autumn Lake collects four decades of prose (1976-2020) by renowned poet and beloved cult figure Douglas Crase, with an emphasis on idiosyncratic essays about quintessentially American poets and the enduring transcendentalist tradition.” Some of the essays collected here, truly, are revelatory, and he writes repeatedly, thoroughly and thoughtfully on poets such as Lorine Niedecker (1903-1970), John Ashbery (1927-2017) and James Schuyler (1923-1991), among multiple other pieces on an array of literary activity, centred around his attentions across some four decades. I’ve read numerous works by Niedecker over the years, but admittedly paid little attention to the works of Schuyler and Ashbery (preferring, myself, the work of their New York School compatriot, Frank O’Hara), although Crase’s essays almost make one feel a sense of loss for not having paid enough attention. One doesn’t need an intimate knowledge of his subjects to fall deeply into these essays, and one is even reminded of just how poorly and rarely Niedecker’s work had been read for so long, only rescued from relative obscurity in later years, thanks to critics and editors such as Jenny Penberthy and Douglas Crase (fully aware that there are plenty of examples of women poets not given their proper due until later: Mina Loy, Anne Wilkinson, Judith Copithorne, etcetera).

Crase’s essays are deeply knowledgeable and intimate, managing to write critically about poets, as in the case of Ashbery and Schuyler, that he was personally close to for decades, allowing his friendships to open up, and not hinder, the possibility for clear critical examination. There is also something quite charming, and even unique, about Crase’s approach, as he offers in his preface to the collection: “You can emerge from your education by heroes and friends lacking a certain conventional balance, partial for the rest of your life to a set of values acquired when you were the fool in love. I wouldn’t have it any other way.” I find that kind of self-assessment quite wonderful, “a fool in love,” as Douglas Crase the critic/reader allows his thinking heart to fuel his examinations into the thinking and structure of any particular author beyond what might otherwise be possible. He continues, further on:

Say you’ve decided to read all of a single author, as I did Emerson, or as Susan Howe must have done with Dickinson; read them as if no one had read them before, and only afterward consult the established critical writings on that author. You soon note that the writings generalize where they might be particular. They elaborate on their learnings, impressions, and at times their prejudice, until it appears eventually they have substituted the elaborations for what the author actually wrote. Jarrell cautioned his readers to remember that the criticism of any age, even the best of it, becomes inherently absurd. Sometimes it’s risible. And the conclusion is: if they got Emerson wrong, or Dickinson, how can I believe what they are telling me about Ashbery, or Niedecker, or the origins of the New York School?

There is such a delight in his examinations, offering a joyous and rapt attention and passionate engagement on very specific poets, poems and moments, while simultaneously able to see how the threads of his particular subject’s work fits into the larger fabric of literary production, culture and politics. As he writes as part of the essay “THE LEFTOVER LANDSCAPE,” “Much of art is the struggle to make emotion less embarrassing.” There is something quite staggering in that simple, short sentence that Crase manages to get, and get to. Honestly, go to page 135 and read the whole paragraph that sits at the bottom of the page. It’s breathtaking. And read the whole essay. And then read the whole collection. This is easily the finest collection of prose I’ve read in years.