CJ Evans’s beautiful book, Lives, explores and circles around, into, and out of what it means to be free and alive in a world where humans insist on war and environmental destruction. Evans’s speaker is constantly trying to remain present in the world through deep perception and seeing, unable to free himself from his past (having served time in literal prison and the metaphorical prison of addiction). In the process, he gifts the reader with his keen perception and awakens the reader. Evans writes in “Now That the Time for Lives Getting Better is Done”: “And what else could my heart be for it not to try?” The collection renders through language a gorgeous natural and domestic landscape within a landscape that is dying—one war, one shooting, one plastic bottle at a time. Lives maps the apocalypse while simultaneously trying to resist it through language and life. (Victoria Chang, “INTRODUCTION”) 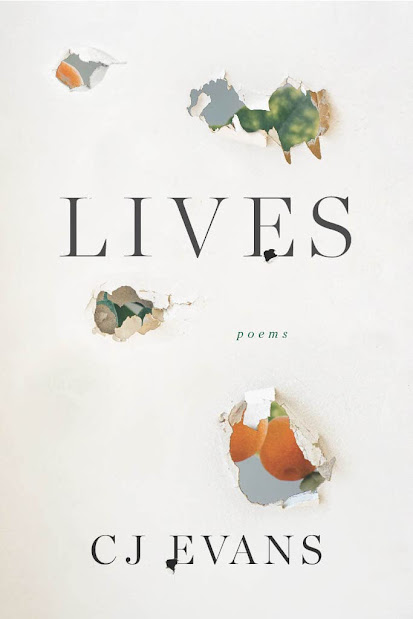 It is hard to know what to say about California poet and Two Lines Press’ Editorial Director [see my interview with him on such here] CJ Evans’ second full-length collection, LIVES (Louisville KY: Sarabande Books, 2022), given the lengthy introduction by Victoria Chang, judge of the Kathryn A. Morton Prize in Poetry that provided this book’s publication. Following his full-length debut, A Penance (Kalamazoo MI: New Issues Press, 2012), LIVES crafts lyric narratives of connection and disconnection; of being alone, as every other part of America might be: singular, and untethered. He writes a cadence of descriptive meditation and thoughtfulness akin to that of Ottawa poet Stephen Brockwell [see my review of Brockwell’s latest here], although one that manages a particular flow closer to that of water, flowing and connecting well beyond the boundaries of each standalone poem. Evans writes of seeking connection, even redemption, writing extensively of standing alone in the dark, only to discover that someone, there, has possibly been there the whole time, reaching out. “This shamed, this used,” he writes, as part of “IN THIS POEM WITHOUT YOU / I’M ALONE AS URANIUM ORE,” “this american body of mine / is near-done. Or I’m done with all it has become, / being american.”

Writing from underneath a shadow of environmental disaster and wildfires, school shootings and suicides, American political and cultural failures large and small, Evans writes of swirling storms and trying to find and even reach the calm centre. The poems, as Michael Ondaatje once paraphrased Jack Spicer, can live on their own no better than can we, and this book as a whole feels less a collection than a kind of metaphysical lyric suite, held together through a common tone, and a variety of intricately-woven threads across a great distance. “Panoramic,” the cover copy uses to describe the work, and his poems maintain a wide scope and deep attention, often returning back to particular tethers, to hold himself in place. He writes unapologetically of life, and a faith in living, almost as though believing in such because he has to; he needs to. “Just for today,” as the poem “INQUIRY INTO STORM” begins, “let’s erupt / the reverie with a plosive, // play in the halation, / the emblazoned, the significant // spiral of our specific / tornado.”

AN ORCHARD IS A FOREST WE BROKE

Walk with me the rows and whir: poor trees poor trees
poor wilderness clipped, fruit plucked, ugly branches robbed
of the weight of little animals. Pears rot around the roots,
blind black eyes in yellow skin infolding, eaten from inside

by neglect and wet. Along down the row and earth bends
away from them toward naked dirt between, and here,
in the cold cradle of winter, we wear high vulcanized boots,
and I work hard each day to remain in the world with you.

The poems in LIVES are grouped into four sections, three of which are built out of assemblages of shorter poems, but the second section holds but a single, extended poem that seems to anchor the collection as a whole, the poem “TRYING TO HEAR A HYMN TO LIFE.” Subtitled “after Donnelly & Schuyler,” the poem, as Evans offers in his acknowledgments, “is after poems called ‘Hymn to Life’ by Timothy Donnelly and James Schuyler, and also nods to poems of the same title by Lou Andreas-Salomé and Nazim Hikmet.” It is almost as though the entire collection swirls around this poem as a central core, akin to how Manitoba poet Di Brandt’s collection Now You Care (Toronto ON: Coach House Books, 2003) was structured around the central core of a longer sequence as well (my review of such seems to have fallen offline, formerly up via The Antigonish Review).

The narrative Evans writes across the seventy stanzas, each five lines in length, of “TRYING TO HEAR A HYMN TO LIFE” loop and swirl around a variety of images of wetlands and Lake Merritt, resting in the centre of Oakland, California, the Simon and Garfunkle song “America,” the memory of Sandy Hook, his daughter’s imaginary sabertooth, “Toothy,” and other family moments, connections, memories, dislocations and trauma, all wrapped up and around not only a belief in life itself, but the very act of that particular brand of faith. “I can’t see the lake from here,” he writes, early on in the poem, “but I believe / it still is. Just as I believe in the shellmounds / I’ll never see, the sabertooth, that the flat moon / is actually a sphere. I believe as I do / in this tabletop you can’t touch: wood pulp crushed // in a hydraulic press with glue.” Or later on in the same poem, offering: “I believe in this as much as god / or biology, which is to say, a bit less // than to make a bet with it against a bullet, / but enough. I call it belief, but it’s purposefully, / wondrously unexamined.” There is such a stunning beauty to this collection, one that shows itself as open-hearted while playing rather close to what might suggest a deeply-wounded chest. This is what one might call a darkly optimistic book; one filled with as much beauty as one can muster, and everything one can see after having been in the dark.