At its core, Surface Tension holds a series of delicate, balanced poems, each symmetrical, palindromic, and made by hand using Letraset. A graphic designer’s tool, Letraset – which standardized typefaces across advertising platforms in an idealistic, 1950s/60s aesthetic of sales copy and purchasing power – foregrounds a clean design; a logical, controllable narrative of graphic beauty and heroic lyricism.

Much contemporary poetry arose from that mandate, but we can swerve the beauty away from the sales pitch.

Surface Tension creates landscapes from the remnants of advertising (Letraset, for instance, is now mostly used by scrapbookers and hobbyists), a pastoral space of deep ink-pools where even the language itself is an oily sheen on the surface of writing. (“MADGE, YOU’RE SOAKING IN IT”) 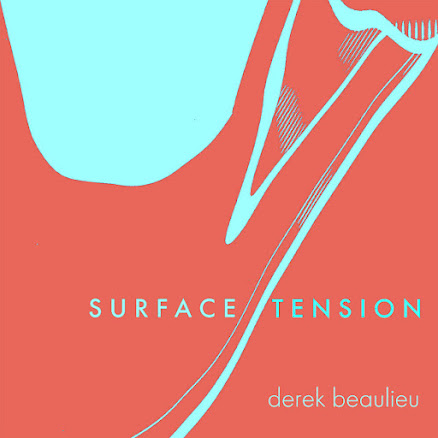 The latest from Alberta poet, editor, critic, publisher and visual artist Derek Beaulieu is Surface Tension (Toronto ON: Coach House Books, 2022), an assemblage of morphed text-as-image that examine how language, meaning and letterforms are shaped, playing with the pure image of letterforms, continuing a structural thread he’s been exploring in his work for years via Lettraset. Surface Tension also marks his return to publishing with Toronto’s Coach House, who produced his full-length debut, with wax, back in 2003, having published since with numerous publishers including Talonbooks, The Mercury Press and Guillemot Press.

Titled Surface Tension, Beaulieu references the physical point where liquid shrinks and reshapes into the minimum surface, offering not simply metaphor but description of how poetic form is and can be shaped, offering a sequence of visual sequences, each composed as a succession of text-forms in sequence, some of which move from the recognizable into purely abstract, but every bit of the sequence intact. The visual sequences are interspersed with prose poems that serve as essay-sketches around the project and its applications, as the piece “FORM IS NEVER MORE THAN AN EXTENSION OF CONTENT,” opens: “The poems are further manipulated using photocopiers to become liquid and languid, troubling poetic logic, perfection, and power narratives, they flow and gather, drip and congeal, sliding off the page.” The prose poems serve, almost, as accumulative essays, offering single-sentence mantras that serve as poetic statements, which themselves form larger essay-shapes through their collection. In the same piece, further on, he writes:

When most of the language we consume is non-poetic, should poetry not attempt to poetically intervene within these spaces that are not traditionally poetic?

Poetry is not the beautiful expression of emotive truths; it is the archaeological rearrangement of the remains of an ancient civilization.