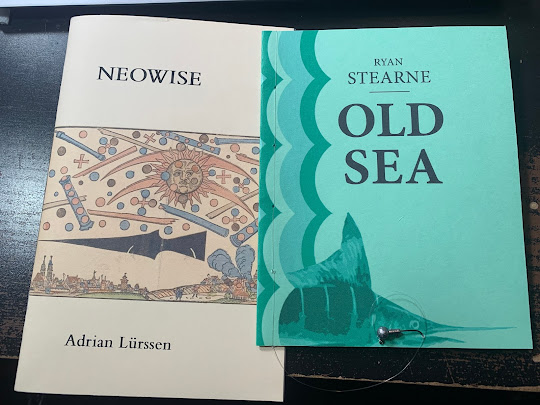 So there’s only two weeks left in the great above/ground 29th anniversary BIG SUMMER SALE, but you probably already know that. It also means that we’re leaning back up into fall, and most likely an announcement in a few weeks further for the 30th anniversary subscriptions. Can you believe the press turns thirty years old next year? Honestly, it seems strange, even to me.

San Francisco CA: I was curious to see a chapbook from Bay Area poet Adrian Lürssen, his NEOWISE (Victoria BC: Trainwreck Press, 2022). As the acknowledgment offers: “HUMAN IS TO WANDER, the full-length manuscript from which this chapbook is excerpted, was selected by Gillian Conoley for the 2022 Colorado Poetry Prize and will be published by The Center for Literary Publishing in November, 2022.” Lürssen’s poems and poem-fragments float through and across images, linking and collaging boundaries, scraps and seemingly-found materials. “She would say bees or blood,” he writes, as part of “Landscape No Longer In a Mother Tongue,” “he said. / Out of earshot is a river, she said.” There is something of the fragment and fractal to the assemblage of his poems, writing a map around the narrative “I,” through the way they fit together; and I’m curious to see how the larger book-length structure presents itself. And yet, in certain ways, the structure here is less of collage or fragment than the swirling of a fractured lyric around a central core. There is something going on here worth very much paying attention to.

The feather at the opening is also a ring around a cause: to enter means to empty pockets of insects and arms. Noon is the action against the enemy – night, a way to say “Uncle” or argue the difference between troop and troupe. The name and the rifle: a system, like a river leading away from home.

“Expect the yam and you’ll get the rhyme.”]

Calgary AB: I’m really taken with Calgary writer Ryan Stearne’s reworking on Ernest Hemingway through OLD SEA (Calgary AB: The Blasted Tree, 2022), produced in an edition of sixty copies (complete with metal hook embedded in the cover). In an “Author Statement” nearly as long as the short story (okay, not really, but close enough), Stearne offers:

Is it possible to recreate style based on computational analysis. That’s what “Old Sea” is at its core, an attempt to use data to rewrite Ernest Hemingway’s The Old Man and The Sea as a short story. Hemingway’s immediately recognizable and brusque style made him an immediate candidate to test my stylometry-based hypothesis. When you read Hemingway, you know you are reading Hemingway. Yet, his simplicity is also an exercise in literary slight of hand, resonating emotionally in a style that seems effortless. What I mean is that Hemingway’s deliberations encompass an exercise in both inclusion and excision. The omitted words are equally as important as those set in the final type.

Procedural work, for the most part, can be seen as a way of either stripping bare or altering altogether, allowing the source material to purely feed the possibility for something entirely different to emerge, but Stearne’s project suggests, instead, a way of retaining the flavour of a particular work through its stripping down. As the opening of Stearne’s short story begins:

The old man sat with the boy on the terrace where they could smell the faint odour of the distant shark factory on the wind, talked about baseball and fishing, and had beers. He hadn’t caught a fish in eighty-four days and was salao, the worst kind of unlucky.
“You will be successful tomorrow,” the boy said.
“Maybe,” the old man said.