I wanted to drive the magnetic machine
through a wet-earth memory of itself        align
the hours in solar grids           return
them to their naked selves
dew-borne woman by dew-torn woman
I wanted to suspend our quivering
for one soluble second             disengage
from office life        evacuate
those bloodlines of children     collapse
one by one, the continents
to calcic dust

Sugarcane fields darkened on the underside of clouds. (“COEFFICIENTS OF FRICTION”) 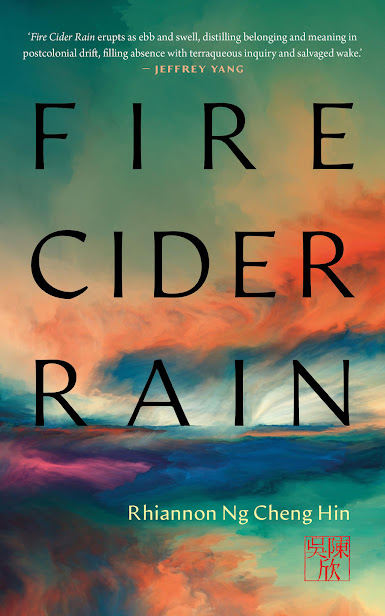 The full-length poetry debut by Edinburgh-born Ottawa poet Rhiannon Ng Cheng Hin is Fire Cider Rain (Toronto ON: Coach House Books, 2022), a collection set in four sections—“Evaporate,” “Condensate,” “Precipitate” and “Collect”—that examine the relationship between a mother and daughter amid an evolution of movement and displacement through the metaphor of water. Across the narrative thread of Fire Cider Rain, Ng Cheng Hin writes of migration and arrival, examining what is gained and what is lost, and what can’t help but be left behind. “as if by ritual, I enter a polemic / of loss,” she writes, to open the poem “HUMAN DISSECTION LAB,” “wherein the axis of grief / lies stitched to the vein of every / hemlock, every arthropod, every / woman’s coarse throat.” Stretching across multiple geographies—from North Africa to Mahébourg to “the edge of Lake Huron” and a Greyhound bus along the 401—there are elements of the tonal structure and familial content reminiscent of another poetry debut from earlier this year, Nanci Lee’s Hsin (Kingston ON: Brick Books, 2022) [see my review of such here], both of which offer a lyric examination on mothers and daughters, loss and exodus, paired but perpetually untethered and seeking to connect. “like mother like daughter like matter like water –” Ng Cheng Hin writes, to close the poem “THE LAWS OF THERNODYNAMICS I.” Writing again of the narrator’s “Māmā” to close the poem “SEAMELT II,” she offers: “I will begin where she left me / with the sound of // water on tile.”

Her opening poem, the sequence “COEFFICIENTS OF FRICTION,” immediately sets a scene of descriptive thickness and full-bodied phrases, offering a lyric density very much aware of its own music and rhythms. “what breakable, half remembered bodies,” she writes, “bent with small attritions / stratospheric relics gliding north / in radical heaps              away from purled trees / broken porchlights, the long ache / of the autumn island fire – […]” There is a staccato pulse of accumulated phrases and lines, writing moments of delicate, subtle music, one atop another until the larger shape begins to reveal itself. The storytelling element of these poems is quite strong, although including occasions where the story gets in the way of the music and language of her lyric, otherwise offering a resolute and gymnastic density of sound, rhythm and meaning, as the first part of the poem “HOLOGRAM” reads:

in fertile floodlight
fabric lifts to pardon my
cynicism, my pisiform

where the Blue Bay Café
lived before it was
permanently closed

above the telephone wires
arriving and departing in lambent strobes:

a hologram, weaving between flame trees
a mother, unlearning how to love