Hayan Charara, These Trees, Those Leaves, This Flower, That Fruit

A poet I loved and was betrayed by
loved me again and my ex-wife
took me to a hotel to fuck my brains out,
something we never did, but just as her body
touched mine a crowd of people appeared,
an acquaintance, a colleague,
my current wife, one by one defiling
the moment, the room, and then,
because they do not give a rat’s ass
about daylight savings, my kids
woke me at 6 a.m., a false hour,
and the lawn needed mowing, the mower
needed gas, and halfway through I ran out
of leaf bags so I called the kids,
they had at the pile of leaves, and the air
smelled like a past I never had
yet always imagined as my own,
a past in which I go on listening
for the sentences never said. 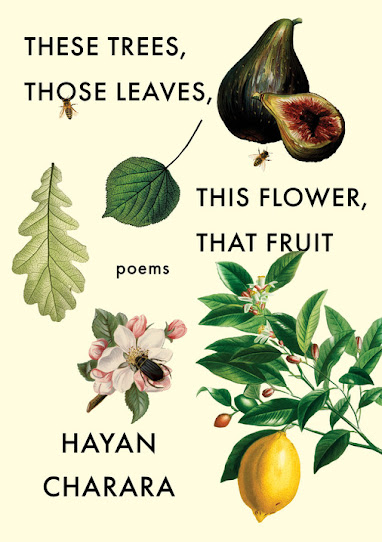 I’m really enjoying the poems that make up Texas-based poet and editor Hayan Charara’s striking fourth full-length collection (and the first of his I’ve seen)—following The Alchemist’s Diary (Hanging Loose Press, 2001), The Sadness of Others (Carnegie Mellon University Press, 2006) and Something Sinister (Carnegie Mellon University Press, 2016)—These Trees, Those Leaves, This Flower, That Fruit (Minneapolis MN: Milkweed Editions, 2022). Through finely-honed narrative poems, Charana’s lyrics offer swirls of narrative that nearly turn themselves inside out in uniquely crafty, clever ways, finding exactly the right moment and the exact right way to land, until you suddenly arrive, realizing you’ve been here the whole time. The extended poem “TERRORISM,” for example, is a masterwork of pacing and narrative, moving slowly across a large canvas to articulate complex thought, as is the shorter poem “ON THE DEATH OF OTHER PEOPLE’S / CHILDREN.” I’m startled by the ease of his line, and through just how much he can accomplish through very short spaces, writing observations that provide a curious distance, able to stand above even his own thoughts to better articulate them.

There’s an immediacy to his lyric, more meditative than urgent, wonderfully revelatory and intimate, offering moment to moment, even among surreal sketches that bear an impossible or even possible present. He writes self through the world, and the world through the self, offering a perspective able to find the smallest light through the dark. This is a remarkably optimistic and present collection, with a quality of dark optimism reminiscent of Ottawa poet Stephen Brockwell’s recent Immune To The Sacred (Toronto ON: Mansfield Press, 2022) [see my review of such here]. As the poem “NEIGHBORS” begins: “George killed men in the war. / Which men, which war, he doesn’t say, and I don’t ask. / The flowers in his yard, poppies or anemones, / remain the most beautiful on the street.”