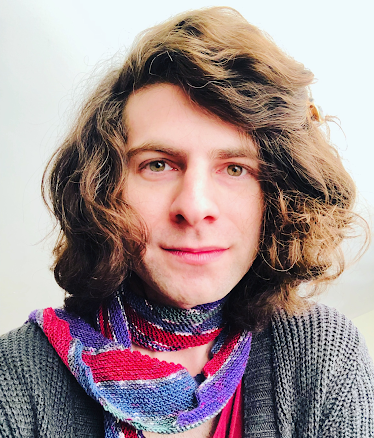 Daniel Sarah Karasik (they/them) is the author of five previous books, including the poetry collection Hungry and the short story collection Faithful and Other Stories. Their work has been recognized with the Toronto Arts Foundation’s Emerging Artist Award, the CBC Short Story Prize, and the Canadian Jewish Playwriting Award. They organize with the network Artists for Climate & Migrant Justice and Indigenous Sovereignty (ACMJIS), among other groups, and are the founding managing editor of Midnight Sun, a magazine of socialist strategy, analysis, and culture. They live in Toronto.

1 - How did your first book change your life? How does your most recent work compare to your previous? How does it feel different?
It felt really validating to see my work published for the first time in book form! I had a play included in an anthology of five plays when I was about 21, republished a few years later in a book of which I was the sole author, and both those experiences were super encouraging. I'd say my work these days is a lot more overtly political (and gayer), and my expectations for its reception more modest. I no longer expect or hope a book's publication might change my life; mainly I hope that my writing gives pleasure or consolation to some people, and maybe opens up for those people a few slender spaces of possibility for different ways of thinking and feeling and being in the world.

2 - How did you come to poetry first, as opposed to, say, fiction or non-fiction?
I think I actually came to fiction and drama first—was writing in both of those forms from the time I was a little kid. Started writing poetry in earnest (and earnestly!) as a teenager, wrote a lot of poems in my late teens and early 20s with the encouragement of a couple of poetry mentors (the poet Robyn Sarah, who edited my first published poetry collection, and the poet Al Moritz, who was my professor at U of T), and then pretty much stopped writing poetry for several years. Started again five-ish years ago, motivated by an intuition that poetry could hold in a fruitful way the political contradictions I was grappling with, and the result became Plenitude.

3 - How long does it take to start any particular writing project? Does your writing initially come quickly, or is it a slow process? Do first drafts appear looking close to their final shape, or does your work come out of copious notes?
It really varies...any book-length project I've published has been the result of many years of work (in one case, more than a decade's intermittent work), but often I write early drafts in pretty concentrated bursts. And then revise for ages. The final shape of the work usually bears a family resemblance to its first drafts, but frequently it has completely different emphases. And it's often much briefer—I tend to cut my early drafts a ton, like by more than half, especially when working in prose forms.

4 - Where does a poem or work of fiction usually begin for you? Are you an author of short pieces that end up combining into a larger project, or are you working on a "book" from the very beginning?
With poems, mostly the first scenario you mention: short pieces that end up combining. Or at least that's been the case so far. There are a few poems in Plenitude that I wrote after I'd figured out the book's basic texture and dimensions, though, poems I wrote to bridge a gap or serve some other function specifically in the context of that manuscript. With fiction and non-fiction, I've at least tried/am trying to write books conceived from the start as books, but my habit of cutting my prose down to like a third of its original length sometimes makes that intention tricky to sustain!

5 - Are public readings part of or counter to your creative process? Are you the sort of writer who enjoys doing readings?
I think I like those, yeah! I like performance, except for when I don't. I miss the minutes before and after public readings, when you could talk to people, and sometimes they'd even say they liked your reading. The pandemic has made that all feel monumental and rare. I hope it can happen again soon, and safely enough.

6 - Do you have any theoretical concerns behind your writing? What kinds of questions are you trying to answer with your work? What do you even think the current questions are?
I'm interested in making communist literature that's also necessarily engaged with the question of what "communist literature" means, or might be stirred to mean, in a context where capitalism and liberalism structure most cultural production in profound, often subtle ways. Ultimately I think the question a communist literature poses is the old philosophical question of the good life, i.e. what a good life amounts to and how we might live one, but where the good life's conditions of possibility are defined politically at every turn: not just the individual "what should I do?", but also the collective "what is to be done?"

7 – What do you see the current role of the writer being in larger culture? Do they even have one? What do you think the role of the writer should be?
Oppositional. Not as a solitary gesture of opposition, though, but in relationship with collective forms of opposition. My understanding of culture is marxist insofar as I don't think culture is autonomous, but that it's always more or less the flower of a particular soil, of specific historical material conditions, and for us that soil is, broadly speaking, white supremacist cishetero-patriarchal settler-colonial capitalism. That's the soil even of the culture that decries the soil, the flower that rebukes its roots. So, to my mind, the project of making art needs to be in active conversation and collaboration with other political projects, like social movements, that fight to transform the broader structural and ideological conditions out of which art and culture grow. (In reality it's almost certainly more of a complicated feedback loop than that description suggests, but so often we're faced with sentimental overstatement in the opposite direction—claims about art and culture's inherent, independent power to transform the world and change minds—that I'll let my slightly one-sided account stand as a counterballast lol!)

8 - Do you find the process of working with an outside editor difficult or essential (or both)?
Both. I'm very particular, often obsessive about details, and also I need help. (I feel that way both as a writer and as an editor, actually.) The editorial process for Plenitude, with editor A. Light Zachary, was a good one: careful, detail-minded, collaborative. In general I feel like it's important to work with an editor who shares a decent number of your core political and aesthetic commitments, or the process is liable to be difficult in the wrong ways. Substantive political and aesthetic disagreements can too easily masquerade as problems of form, "objective" technical problems that need fixing rather than subjective conflicts over how the world and language should be.

9 - What is the best piece of advice you've heard (not necessarily given to you directly)?
Hm...I feel like by repeating the advice I'd be effectively giving the advice, and I don't feel qualified to give advice :)

10 - How easy has it been for you to move between genres (poetry to fiction to plays)? What do you see as the appeal?
Easy because capricious. The appeal is partly about what those forms can do, as forms—e.g. the way I can express an idea or a feeling in verse without the need to build narrative scaffolding around it, and without the form inspiring a reader's expectation that I'll do so. Also partly about routes for reaching different audiences: I sort of have this sense that poems are for everybody, since reading one is so low-commitment, in a way that's less true of, say, novels and plays...which may be read and viewed more/most often by people who are already in the habit of reading novels and watching plays? Maybe? Not sure, but I have thoughts like that sometimes.

11 - What kind of writing routine do you tend to keep, or do you even have one? How does a typical day (for you) begin?
I have no writing routine tbh. I write in big bursts and then nothing at all for a while. But even that's not consistent, since sometimes I maintain a steady routine for the length of a given project—but not beyond it. A typical day for me begins in the afternoon. I'm working on it.

12 - When your writing gets stalled, where do you turn or return for (for lack of a better word) inspiration?
What's happening in the world and its implications and how I feel about it.

13 - What fragrance reminds you of home?
Fragrancelessness. Which is probably in fact fragrance unnoticed, passing as neutral.

14 - David W. McFadden once said that books come from books, but are there any other forms that influence your work, whether nature, music, science or visual art?
I actually find it kind of frustrating and alienating when books come from (are responses to) books more than they come from (are responses to) the world! Though clearly it's always both/and—a question of proportion. I feel like it's good for literature to be influenced by all those categories of experience you name (nature, music, etc.) and also by, like, the direct data of experience, history, work, love, other people. And other books, but mainly insofar as they express those data or helpful, beautiful interpretations of them.

15 - What other writers or writings are important for your work, or simply your life outside of your work?
I feel like I'm slowly forgetting how to read, but the part of me that still remembers how to read would say Anne Boyer, Wendy Trevino, Mariame Kaba, Casey Plett, Kai Cheng Thom...and I finally read The Black Jacobins just recently, the Trinidadian marxist C.L.R. James's famous study of the Haitian Revolution, which I found really exhilarating.

16 - What would you like to do that you haven't yet done?
Experience more of the world ("travel" approximates but doesn't fully capture what I mean). Plant deeper roots, in a way that helps me to feel safer and more nourished more often. Resolve or better negotiate the contradiction between those two wants.

17 - If you could pick any other occupation to attempt, what would it be? Or, alternately, what do you think you would have ended up doing had you not been a writer?
Probably criminal defence or labour law. I like parsing arguments in detail and I hate cruelty, even and especially when the cruelty is state-sanctioned or otherwise socially naturalized as inevitable or just. Law seems like a good fit for that temperament. Or a terrible one, since bourgeois law is far less about justice than it is about power. Good or terrible. So I hedge that bet by not doing law.

18 - What made you write, as opposed to doing something else?
An overall tendency to make cautious, responsible small choices and reckless, irresponsible big ones.

20 - What are you currently working on?
I'm pretty busy with editing Midnight Sun Magazine, and I've been surprised by how little mental space that work leaves me for my own writing. But I'm also very (very) slowly chipping away at a book of non-fiction, fragmentary reflections on what it means to have/do revolutionary socialist politics today in a way that isn't purely symbolic or gestural but also acts on the world. It's looking like it might end up as a work of prose poetry—symbolic and gestural :) We'll see.