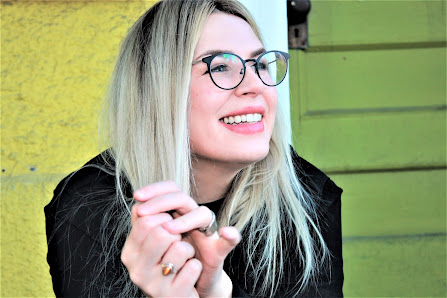 Emily R. Austin was born in Ontario, Canada, and received a writing grant from the Canada Council for the Arts in 2020. She studied English literature and library science at Western University. She currently lives in Ottawa. Everyone in This Room Will Someday Be Dead is her first novel.

Thanks for chatting with me, rob! My first novel, Everyone In This Room Will Someday Be Dead came out last year. A few years before it, I wrote a novella, “Oh Honey.” In terms of how the works compare I’d say my writing has become a little more earnest and a touch less focused on apathy.

Everyone In This Room changed my life in that it’s what connected me to my talented literary agent (Heather Carr with the Friedrich Agency), as well as publishers, editors, publicists, other writers, booksellers, librarians, and readers. Day to day, my life doesn’t look too different. I get more messages than I used to. I feel a little less coy referring to myself as a “writer.” I’m also a bit more motivated to write now, I think.

When I was thirteen, my high school English teacher gave me a short story assignment. Before high school, I was weak in English. I had a learning disability growing up (and still do, presumably.) I was never told what it was, but I’m pretty sure it’s dyslexia. Because of that, I performed poorly in English growing up. So, I was surprised to get an A+ on the story I wrote when I was thirteen. My teacher moved me from the college track English to the university track English, entered my story in a contest, and it won first place in Ontario. I got a fancy plaque. So, I got into writing fiction because my little thirteen-year-old heart was given the confidence to do so by a very kind English teacher.

It takes me a while to write an entire book, but I can write the beginning of a book pretty quick. I have lots of ideas, though most are bad. In terms of how the drafts look, I edit while I write. I don’t think you’re supposed to do that, though. Because I do, my first drafts have already been pretty painfully edited. After they’re done, I action the notes from people like editors or my agent, and the story shifts a bit. So far, you’d be able to tell it’s the same book, though, I think.

I’m an anxious person who feels a weird illogical desire to be always working towards something, so if I’m writing—I’m hoping for it to become a book.

Everyone in this Room came out during the pandemic. It was very shortly before covid that I found my literary agent. It was near the beginning of the first lockdown when I got the book deal—so, no, I’ve not done many public readings. None, in fact, besides a few virtual events. I used to intentionally select classes in university based on whether they had a presentation component. I’d have chosen a class with a forty-page essay over one five-minute presentation.

I’m about ten years out from university now, and miraculously, I’ve overcome a lot of that. I went through a period of feeling deeply apathic, and one of the few benefits to apathy is that it made it possible for me to speak publicly without caring. I am no longer an apathetic person, but I managed to get a number of speaking opportunities under my belt while I was, and unintentionally overcame the fear. Somehow, I actually teach classes now. That all said, it would still be a lie to say I enjoy any form of public speaking. I am certainly able and willing to readings, though.

The main reason why I write is because I like to. I don’t sit down to write thinking of the concerns I have, or the questions I want to get to the bottom of. I am just sort of acting on a compulsion. Questions usually do come up as I’m writing though. It depends on the characters, I think. In Everyone In This Room Will Someday Be Dead the questions relate to, “What’s the purpose of life?” and “Why not kill yourself?” I guess generally, I’m trying to put myself in the shoes of other people to understand, and foster empathy maybe.

I think writing can be important. It can do things like entertain, offer hope, or make you think. Though, it doesn’t always do that, does it? I don’t have a strong opinion about what the role of a writer should be. I guess I think everyone should be whatever they want.

I really love working with editors. I think having other people involved in your writing, who prompt you to improve it, is extremely fortunate. For me, I also find it’s often easier to action feedback from other people because I have a lot of self-doubt, and when there are editors involved in your writing whose judgement and skill you trust, it makes writing easier. I was lucky to have a very talented editor, Daniella Wexler, work on Everyone In This Room Will Someday Be Dead. I can say, for sure, that book is much better because of her. My literary agent, Heather, also edited, and she significantly improved that book too. There were others involved too. I think having anyone involved in your writing who cares about it enough to want to make it better is lucky.

Write pretending no one is going to read it but you.

10 - How easy has it been for you to move between genres (novella to novel)? What do you see as the appeal?

Genre wise, I’d say my novella and book were pretty similar. I like to write about women, mental illness, and dark humour. I tend not to write very long stories.

I should probably start a writing routine. I have multiple day jobs in addition to writing, and while I think I’m somehow managing to create the façade that everything’s organized—the behind the scenes of my writing is a mess. I write in my note’s app a lot. Usually, the bulk of my books are written over a handful of frenzied weekends, where I did nothing but write, and then picked at for half an hour here and there. All to say, I’m probably in no position to offer any advice regarding this.

If I feel stalled, I try to get away from it. I go for a walk. I read something. Or, usually, I start something new and come back later.

There’s some wild plant that grows around Southwestern Ontario (and probably Ottawa too) that I smell sometimes when I’m outside. I don’t know what it is, but every time I smell it, I simultaneously remember being a teenager working at a summer camp, playing at my aunt and uncles farm, and laying in the grass in my parent’s backyard. It’s some sort of weed, I think. It has a distinct smell. I want to say it’s juniper, but I think I just like the word “juniper.”

Music definitely does for me. I’m a big fan of the band Muna, Phoebe Bridgers, and Lucy Dacus. Every time I hear a song I like, I imagine a story around it.

I’d like to find ways of being a more helpful person to other people. I’m looking for opportunities to contribute more to the well-being and happiness of other people.

Outside of writing, I’ve worked as a librarian, a college professor, and an information architect. I might just be a little burnt out, but I’m becoming one of those “I don’t dream of labour” types. It might be fun to just be a writer someday.

I am into visual arts too. When I was a kid, I thought I’d do something with that. When I was going to university, I felt like I had to pick between being an English major or go into visual arts. I picked English. I planned to be an English major, to go to library school, and to try to be writer, but I didn’t think the writer part would actually happen. It’s nuts that has to be honest. I felt sad about not going into visual arts though. I got a tattoo of this doodle I used to draw on all my notes on my side as a sentimental way of remembering I wanted to get into art once.

The Swimmers by Chloe Lane. It’s about a twenty-six-year-old woman named Erin who is spending a holiday weekend with her aunt, uncle, and terminally ill mom. Over the weekend, she learns her mom is planning to end her life the following Tuesday. It’s very sad and very funny.

I watched Drop Dead Fred recently which is a black comedy from 1991. I watched as a kid and re watched recently. It’s about a woman’s imaginary friend named Fred. It’s got 11% on rotten tomatoes, but I love it.

I’m working on a couple things. One is a book about a woman with a phobia, and the other one about a girl who failed twelfth grade English.

Posted by rob mclennan at 8:31 AM
Labels: 12 or 20 questions, Emily R. Austin, Simon and Schuster