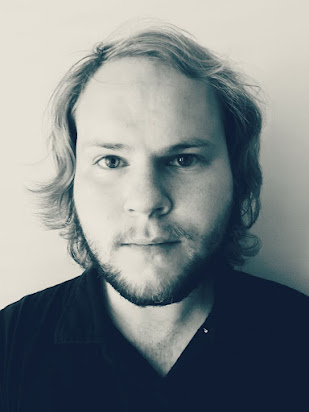 Paul Cunningham currently serves as the Creative Writing Program Coordinator at the University of Notre Dame, where he also co-manages Action Books, an international press for poetry and translation. He is the author of Fall Garment (2022) and The House of the Tree of Sores (Schism Press, 2020). From the Swedish, he is the translator of Helena Österlund’s Words (OOMPH! Press, 2019). He has also translated two chapbooks by Sara Tuss Efrik: Automanias: Selected Poems (Goodmorning Menagerie, 2016) and The Night’s Belly (Toad Press, 2016). Cunningham holds a PhD from the University of Georgia, where he was the recipient of the 2021 Diann Blakely Poetry Prize, and an MFA from the University of Notre Dame, where he was a Sparks Prize Fellow.

I published my first e-chapbook, Metro-Goldwyn-Meyer, with Pangur Ban Party in 2010. I added a listing to Goodreads with no expectations. Out of nowhere, DA Powell posted a wildly generous review comparing Metro-Goldwyn-Meyer to Fellini’s circus in 8 1/2. Dennis Cooper also posted about it on social media. Such early support from Powell and Cooper was incredibly significant.

2 - How long does it take to start any particular writing project? Does your writing initially come quickly, or is it a slow process? Do first drafts appear looking close to their final shape, or does your work come out of copious notes?

I do a lot of research, a lot of notetaking. The idea comes slowly, but the writing itself usually happens quickly. Editing is my favorite part.

3 - Where does a poem or work of prose usually begin for you? Are you an author of short pieces that end up combining into a larger project, or are you working on a "book" from the very beginning?

For me, story always originates from some key image. I keep image journals. Sound is another important component for me. I never begin any project by considering narrative or plot. Those things are secondary to image or sound. The word “plot” reminds me of burial plots. Makes me think of death. A very boring death.

4 - Are public readings part of or counter to your creative process? Are you the sort of writer who enjoys doing readings?

I write poetry that’s meant to be read aloud and performed. Again, sound—and performance—are very important to me. I also enjoy doing readings. Jake Syersak and I started a reading series in Athens, Georgia called Yumfactory (a tribute to Lara Glenum’s Pop Corpse). Nathan Dixon eventually joined, too, as a co-curator. Hasn’t been very active since the pandemic. But maybe one day Yumfactory will return. I’m focusing most of my attention on the Action Books Blog these days.

I’m an ecologically motivated poet. Very interested in the possibility of an Anthropocene poetics. I have an essay in the works on something I call “Ecodecadence”. I’ve been thinking about how people can approach art as a mycelic practice. A many-limbed artistic ecology. A poetics that is multilingual, invasive, excessive, transgressive, queer, degenerative. More to come.

8 - How easy has it been for you to move between genres (poetry to fiction to translation to creative non-fiction)? What do you see as the appeal?

I enjoy working in many different mediums. Especially when I have no previous experience with a particular medium. I always return to this quote from David Bowie: “If you feel safe in the area you’re working in, you’re not working in the right area.” Poetry, translation, film, painting, etc. I love approaching a subject working in two or more mediums. How might my response to a subject via poetry differ from my response to the same subject via painting? How might I adapt a poem into a film? I like to feel challenged. Obstructed.

9 - When your writing gets stalled, where do you turn or return for (for lack of a better word) inspiration?

I surround myself with images and photographs. (Usually taped on walls, tacked on corkboards.) Francis Bacon also used this approach. He would look at specific images when attacking his canvas (i.e. a photograph of a wrestler’s back, an animal mid-strike). I’ve also learned a lot about this sort of thing from fashion designers. For example, Charles de Vilmorin, a new designer I’ve been following since the pandemic, takes a similar approach when making new sketches. In a way, Kubrick did this too. I read he made the cast of The Shining screen Eraserhead before they began filming. It’s a way to channel a mood.

10 - David W. McFadden once said that books come from books, but are there any other forms that influence your work, whether nature, music, science or visual art?

I’ve been returning to Anna Lowenhaupt Tsing’s The Mushroom at the End of the World lately. A recommendation from Mike Young. I also like to listen to certain kinds of music. Music helps me get into a good headspace for writing, but typically it has to be instrumental or something that drones. The lyrics can’t be particularly distracting. I’ve been writing to this album lately: https://www.youtube.com/watch?v=zlZyFLX7VdE

11 - If you could pick any other occupation to attempt, what would it be? Or, alternately, what do you think you would have ended up doing had you not been a writer?