On the invention of the seasons

You can’t blame that part on the heaven &/or hell

For Hades hath no such fury

But a woman can do anything in her pain

If she had to lose so the world would lose

First she tore at her hair

She beat her breast

Then she turned her rage to the black soil itself

They say she broke the plows w/ her own hands

That in her sorrow the mother became the blight

Halifax poet Annick MacAskill’s latest—after No Meeting Without Body (Kentville NS: Gaspereau Press, 2018) [see my review of such here] and Murmurations (Gaspereau Press, 2020) [see my review of such here]—is Shadow Blight (Gaspereau Press, 2022), a book that works through, as the back cover offers, “the pain and isolation of pregnancy loss through the lens of classical myth. Drawing on the stories of Niobe—whose monumental suffering at the loss of her children literally turned her to stone—and others, this collection explores the experience of being swept away by grief and silenced by the world.” Shadow Blight opens with all potential and possible ghosts before drifting through a contemporary into a backdrop of mythological figures, writing the enormity of loss and the slow and sudden loss into and through the isolating realities of rage and grief. As the third and final stanza of the opening poem, “Swimming Upwards,” reads:

But April hosts its own—the ghost
of my due date, drifting
in the hypothetical—one silver week,
its arms outstretched— 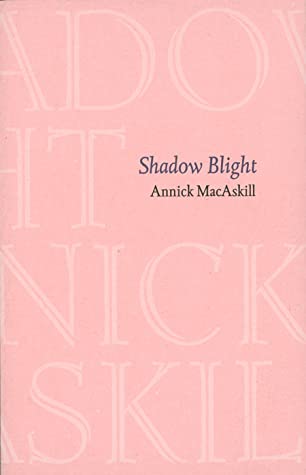 From there MacAskill slips into citations of Ovid’s Metamorphosis, writing mothers and other changed figures from Greek myth, including Dryope (who went into labour while dragging a sacrificial bull by its horns) and Chloris (who was transformed into the deity Flora, and was said to have been the one to transform Adonis, Attis, Crocus, Hyacinthus and Narcissus into flowers), but focusing her attention on the figure of Niobe, who wept for the loss of her many children, all of whom had been killed by the Titan Leto as punishment for Niobe’s pride. As MacAskill’s poem “Delos” ends: “as when before the birth / her children weren’t living facts // but a cloudy possibility.” Miscarriage still seems a subject that sits in the shadows, away from open conversation, and the experience of losing a child would be isolating enough, even without so much silence attached. MacAskill attempts to not only write out the silences but through them. “body stubborn / blood slowing / limbs / already / turning / to rock,” she writes, to close the extended poem “Homeric Similie,” “mouth / wide / o / pen [.]”

There is a way that MacAskill writes her way through the threads of myth, utilizing the details of myth as a means to work her way through, beyond a simple retelling, is reminiscent, slightly, of North Georgia poet and editor Gale Marie Thompson’s Helen Or My Hunger (YesYes Books, 2020) [see my review of such here]. One should mention, also, American poet and translator Niina Pollari’s Path of Totality (Soft Skull Press, 2022) [see my review of such here], a collection that more overtly and directly writes “about the eviscerating loss of a child, the hope that precedes this crisis, and the suffering that follows.” In comparison, MacAskill writes not as diary but working through the portrait of such a loss through the lens of the stories of mythological Greek women. “But a woman can do anything in her pain,” she writes. Or, as the poem “First Snow” offers: “She scales // the choss, and on the way, ties Proserpine’s yellow ribbon / across the slim arm // of a spontaneous birch tree.”

At sixty-four pages, Shadow Blight isn’t a lengthy collection, but her lyric allows for an openness, an extension of line and phrase that stretches her phrases and sentences across multiple pages; perhaps Shadow Blight is less a collection than a single poem writing out an experience, pulled into and wrapped up as a lyric suite uniquely broken, collected and packed. “—o how beautiful / the poets make our catastrophes—” she writes, to close the poem “Dryope.” And yet, through the grief there is a kind of hope, examining the stories of mythological women and connecting them to her own experience, one that allows for the loss to become less isolating, and less singular. Stepping back, beyond myth, and bookending the collection to close is the short sequence “Miscarriage,” that includes: