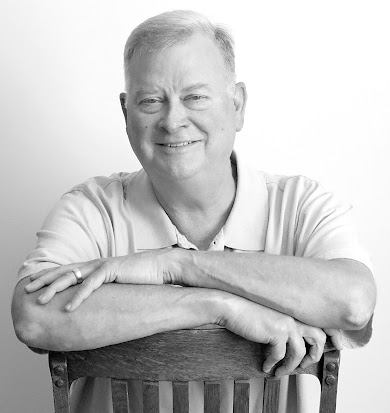 Larry Pike’s debut collection of poetry, Even in the Slums of Providence, was published by Finishing Line Press in October 2021. His poetry and fiction has appeared The Louisville Review, Seminary Ridge Review, Cæsura, Exposition Review, Cadenza, Capsule Stories, Jelly Bucket, several anthologies, and other publications. His play Beating the Varsity was the “Kentucky Voices” production at Horse Cave (Ky.) Theatre in 2000, and it was published in World Premieres from Horse Cave Theatre (Motes Books, 2009); two other plays have received staged readings. He is a graduate of Mars Hill College (B.A., English) and Purdue University (M.A., communication). A retired human resources manager, he worked for the same company for over forty-two years. He lives with his wife, Carol, in Glasgow, Kentucky.

1 - How did your first book change your life? Since it is my only as well as my first book, it was very exciting, and the excitement repeated itself in several stages. I was stunned when I was notified that Finishing Line Press wanted to publish Even in the Slums of Providence. Then, there was a giddy feeling when I received the cover design and first galley proofs. I was out of town when books arrived at my home; I had a friend open the box and take a few pictures and email them to me. Over the next several days, I would view the photos every hour or so, it seemed, just to make sure they were real. How does your most recent work compare to your previous? I’ve never focused on one theme or topic, so I don’t get a sense of dramatic changes over time. I think my work has gotten sharper, more polished, but that may just be my view. How does it feel different? My confidence in what I’m trying to achieve has increased. I believe I’m more ambitious in constructing a piece.

2 - How did you come to poetry first, as opposed to, say, fiction or non-fiction? A friend in high school, Susan Webster Vallance, encouraged me to write a poem. I don’t recall why she did it or what the specific outcome was, but it’s all her fault.

3 - How long does it take to start any particular writing project? Does your writing initially come quickly, or is it a slow process? If I’m intrigued or challenged by a subject, “starting” doesn’t take long. Developing momentum with a piece might. Do first drafts appear looking close to their final shape, or does your work come out of copious notes? I generally go through a lot of drafts, but the changes from one to another often are minor, so first and final drafts are clearly related.

4 - Where does a poem or work of fiction usually begin for you? With an image or a discrete experience, something that demands to be considered. Are you an author of short pieces that end up combining into a larger project, or are you working on a "book" from the very beginning? Since the poems in Even in the Slums of Providence were written over a period of fifty years, I can’t say I was working on a “book” from the beginning.

5 - Are public readings part of or counter to your creative process? Are you the sort of writer who enjoys doing readings? I really enjoy doing readings. Poems are visual, but they need to be heard too. The process of thinking about how to deliver or perform a poem informs what it means to me and how an audience might understand or interpret it.

6 - Do you have any theoretical concerns behind your writing? I don’t think so. I write about what grabs my attention in the moment. It could be a small thing. What kinds of questions are you trying to answer with your work? In the larger sense, I’m not trying to answer any questions or make any statements, other than those that might be prompted by what caused me to write the piece. If I encounter some little truth in a subject that interests me, I’ll do my best to address it. What do you even think the current questions are? There are lots of important questions now: equality, fairness, faith, the pursuit of peace, and many more. I’m not qualified to issue pronouncements on them, but maybe I have something to say about some aspects of them.

7 – What do you see the current role of the writer being in larger culture? Individual writers have different roles. Some teach or persuade. Others entertain. Some report, or perform other functions. The lines among roles blur, overlap, change all the time. Does s/he even have one? I think to be true to how he or she sees his or her calling. What do you think the role of the writer should be? Use his or her talent and inspiration to do the best work he or she can do, whatever it is.

8 - Do you find the process of working with an outside editor difficult or essential (or both)? The occasions when I’ve worked with an editor have benefited my work, usually a great deal. I think an editor’s interests and mine are the same—to produce the best piece possible. I try to listen and not be defensive.

10 - How easy has it been for you to move between genres (poetry to fiction to plays)? What do you see as the appeal? Easy wouldn’t be the best word. I am primarily a poet, but I have written fiction and three plays. In my experience, some subjects or ideas seem better suited to one genre or another, or they evolve that way. I try to be open to where the piece wants to go.

11 - What kind of writing routine do you tend to keep, or do you even have one? How does a typical day (for you) begin? Unlike many writers I admire, I don’t have a routine. I try to pay attention to things around me, things that might prompt a poem or whatever. Typically, I start the day reading the news.

12 - When your writing gets stalled, where do you turn or return for (for lack of a better word) inspiration? Being with family, friends, and in various social gatherings helps me, just being exposed to conversation and ideas; I’ve used a lot of lines that I overheard. Also, I read a lot; exposure to good writing helps me get on track.

13 - What fragrance reminds you of home? Fresh air. My wife likes to have some windows open, even in winter.

14 - David W. McFadden once said that books come from books, but are there any other forms that influence your work, whether nature, music, science or visual art? I joke that, unlike my wife, I’m an avid indoorsman. I like learning about a lot of different things, though. You never know what might be useful.

15 - What other writers or writings are important for your work, or simply your life outside of your work? I read a lot of fiction, especially spy novels and thrillers; I just like them. I really enjoy James Lee Burke’s Robicheaux novels. I recently read several of Lionel Shriver’s novels; her So Much for That is an all-time favorite. I re-read some of Ron Carlson’s short stories frequently.  I’ve got a lot of favorite poets. I keep a copy of Tom Stoppard’s play, Arcadia, on my nightstand; reading it always helps me glimpse anew what’s possible in writing.

16 - What would you like to do that you haven't yet done? I want to drive across country; I’ve seen very little of the Plains and the West. I also want to travel through Central and Eastern Europe.

17 - If you could pick any other occupation to attempt, what would it be? Or, alternately, what do you think you would have ended up doing had you not been a writer? I did have a forty-year career in human resources, and during part of that time I was also an adjunct instructor. Ever since I started reading Sports Illustrated as a kid, I’ve wanted to be a sportswriter, so maybe I’d give that a shot.

18 - What made you write, as opposed to doing something else? See #2. Also, my parents encouraged reading and learning. At a very young age, I had subscriptions to not only Sports Illustrated and Boy’s Life, but The Atlantic, Harper’s and Esquire. I grew up with an appreciation for the clever and effective use of words.

20 - What are you currently working on? A children’s book.