Turned out
to be

a Haiku
after all

I wasn’t
even trying 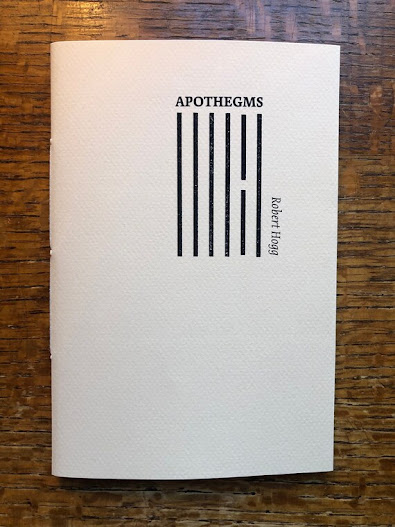 I’ve been fascinated by the way Ottawa-area poet Robert Hogg has re-emerged over the past few years, seemingly out of nowhere with a sequence of poetry chapbooks in relatively-quick succession: Ranch Days (for Ed Dorn) (Ottawa ON: battleaxe press, 2019), Ranch Days – The McIntosh (Kemptville ON: hawkweed press, 2019), A Quiet Affair: Vancouver ’63 (Victoria BC: Trainwreck Press, 2021), From Each Forthcoming (Ottawa ON: above/ground press, 2021), The Red Menace (Mountain ON: Hogwallow Press, 2021) and APOTHEGMS (Ottawa ON: Apt. 9 Press, 2021). During his first decade or so of publishing, Hogg never appeared to be a writer in a any particular hurry, although he did follow a trajectory of relatively-consistant book-publication from his days completing a PhD on Charles Olson under Robert Creeley at the University of Buffalo, through what ended up as a accumulated thirty-eight years of teaching at Carleton University in Ottawa before retiring: The Connexions (Berkeley CA: Oyes, 1966), Of Light (Toronto ON: Coach House Press, 1978), Heat Lightning (Windsor ON: Black Moss Press, 1986) and There Is No Falling (Toronto ON: ECW Press, 1993). For a poet who published so regularly across nearly thirty years, it does seem strange to note that his most recent full-length collection appeared twenty-nine years ago. This particular silence was only broken through his post-Carleton slow retirement from organic farming with the emergence of the chapbook from LAMENTATIONS (above/ground press, 2012), a title reprinted through above/ground in a slightly expanded edition in 2016. Otherwise, this period of relative silence was punctuated otherwise with two volumes of editorial work: An English Canadian Poets, The Confederation Poets – Vol. 1 (Vancouver BC: Talonbooks, 2009), and the Canadian issue of the Portland, Maine journal The Café Review in April 2019.

Hello brown death
I thought you’d be
black as night

and here you are
imitating earth
initiating me

As I’ve articulated prior, I’ve always been fascinated by poets who engage in lengthy publishing silences, irregardless of whether or not they ever return. One could point to Montreal poets Artie Gold and Peter Van Toorn, British Columbia poet David Phillips (who apparently kept writing but simply stopped publishing, unfortunately losing multiple completed unpublished mansucripts during a house flood), Ottawa poet William Hawkins or even Phyllis Webb: poets who simply paused, whether no longer writing or no longer publishing, due to a variety of possible and personal reasons. Why or even how do engaged and otherwise active writers simply stop? Where do they go? Prince George, British Columbia poet Ken Belford published a handful of titles up to 1970, but wouldn’t publish again until 2000, after which he managed to publish multiple books and chapbooks until his death, some twenty years later. Monty Reid published multiple books up to his Flat Side (Red Deer: Red Deer College Press, 1998) from his home base of Alberta, with nothing to follow until he had been nearly a decade in Ottawa, offering his Disappointment Island (Ottawa ON: Chaudiere Books, 2006) as his first post-Alberta title, and the first of a handful of books that followed. Saskatchewan poet John Newlove spent a decade publishing a book every year or two until the Governor General’s Award-winning Lies (Toronto ON: McClelland and Stewart, 1972), before an extended silence of new material that included a selected poems, The Fat Man: Selected Poems (1962-1972) (McClelland and Stewart, 1977) and the long poem The Green Plain (Victoria BC: Oolichan Books, 1981) before his final full-length collection of new poems The Night the Dog Smiled (ECW Press, 1986). But for a larger selected poems and his posthumous selected poems, his publishing would only otherwise see a chapbook, THE TASMANIAN DEVIL and other poems (above/ground press, 1999). Toronto poet Pier Giorgio Di Cicco published books for some fifteen years until The Tough Romances (Toronto ON: Guernica Editions, 1990), with veritable publishing silence that extended until Living in Paradise (Toronto ON: Mansfield Press, 2001), a book that became the opening to his own return, bookending the time he spent in an Augustinian monastery north of Toronto.

The thirty-two short poems in APOTHEGMS follow Hogg’s more recent trajectory of dating his poems, many of which are reworkings of either finished poems or drafts originally composed during the 1960s, citing both dates of composition. There does seem something quite particular to Hogg for the fact that he does this, citing not only dates, but multiple dates for individual pieces, let alone the fact that he’s returning to much earlier poems, perhaps as a way to jump-start him again into productivity. As he says in a recent interview conducted by Ken Norris, posted online at periodicities: a journal of poetry and poetics:

I very carefully chose, for my first book, what I felt were the strongest and most cohesive poems from that group. After the book came out, I felt little inclination to publish many of the others, and let them sit uncollected for many years. A lot of these were written for various women I'd had attachments to, and being newly married, I did not see including them in Standing Back when it came out in 1971. So, a quantity of these poems remained in various stages of completion, several not even typed up, and many others revised extensively. I came back to this hoard of material a couple of years ago, and began the long process or revision and resuscitation. I was surprised at how many were salvageable and would make good poems. Others, published in periodicals and Souster's New Wave Canada, did not get collected for the same reasons—too personal, too revealing.

Many poems which were written in Vancouver during my four years there from the fall of 1960 to October 1964 saw only periodical publication, or were also left unpublished. Over the past few years, I worked my way through these drafts also, and they are now collected in a ms called Not to Call it Chaos - the Vancouver Poems. A central poem in this sequence is the recently written A Quiet Affair – Vancouver '63 which came out as a chapbook this spring from Trainwreck Press. It recapitulates my experiences during the summer of '63 and presents the conditions as I experienced them around the Vancouver Poetry Conference. But it ties in with a number of other poems, most of which were written during that early period. The poems are predominantly lyrical in structure, but again, taken as a whole, they represent a kind of bildungsroman in a sequence of poems.

The poems in APOTHEGMS are short, and lean into koans, the short snap of expectation and quiet words placed after another, with an intimacy that allows the dates to become an essential element of small moments that are clearly crafted, while still allowing a sense of immediacy. He writes of time, and the immediacy of it; referencing haiku and the moment in which he is standing, no matter the distance of temporality between thought and composition. Think of the poem “URBANESQUE,” composed from his home-base of Mountain, Ontario “2021-10-04,” that reads: “The tiny / tea bag / plate // in my / cupboard / takes // up more / real / estate // than the / tall / glass // standing / next / to it [.]” In certain ways, the only differences between the accretions of Hogg’s longer poems and these short, near-bursts is a sense of scale: the shorter pieces included here still allowing for a kind of accretion, but one set with a particular kind of boundary. The larger accretion, one might suggest, might be the very assemblage of these poems into a chapbook-length manuscript.

Sending you
an imaginary

Daphne
in an email

What could be
more real

Hogg connects time to the physical, and the physical to the body. There’s a way he’s attentive to both physicality and natural spaces, in part, one would think, through his time as a kid on a farm in the Cariboo, or his decades farming a space just south of Ottawa. With references to poets Lorine Niedecker, H.D. and Daphne Marlatt, Hogg doesn’t have to describe the landscape to allow for its presence; as Creeley attended the immediate, and his sense of the “domestic,” so too with Robert Hogg, attending his immediate, whether memory or at that precise moment, and a “domestic” that concerns the landscape, both internal and external.

At the back of the collection, he offers a list of books “currently in the works for publication,” including “Lamentations; The Cariboo Poems; Postcards, from America; Amber Alert; Not to Call It Chaos – The Vancouver Poems; Oh Yeah—More Poems. In progress are The Offending Temple, and Ill Parodies – O, a selection of satires on various Shibboleths and current affairs.” To even see half of these titles in print would represent a remarkable output.