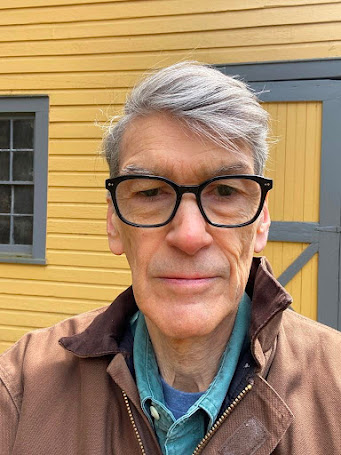 Douglas Crase is a poet and former MacArthur fellow who made his living as a speechwriter. His first book, The Revisionist, was named a Notable Book of the Year 1981 in The New York Times and nominated for the National Book Award and National Book Critics Circle Award. His collected poems, The Revisionist and the Astropastorals, was a Book of the Year 2019 in the Times Literary Supplement and Hyperallergic. His collected essays, On Autumn Lake, was noted for its “rare intimacy” and awarded a starred review by Kirkus in 2022. Crase lives with his husband in New York and Carley Brook, Pennsylvania.

The interval between the writing and the publication was so lengthy the emotional change had already occurred. One thing you learn from a first book, however, is that it matters to people you never envisioned and doesn’t matter to those you secretly hoped to persuade. This can be interesting. It changes the way you think about fellowship, which is bound to make a difference in your work.

Poetry came to me, twice. The first, before I was old enough to read, was when my grandmother read to me “The Song of Hiawatha.” The magic of it transformed her voice and it seemed she herself was Nokomis, daughter of the moon, the grandmother of the poem. The second was when my great aunt gave me a copy of Leaves of Grass. By then I was eleven. I'd written a would-be novel about a boy and his horse, so my aunt probably thought I needed an example of authentic literature. The magic this time transformed the farm where I was growing up, made it an arm of the cosmos, a proxy for Whitman’s cosmic democracy. Fiction couldn’t compete with that kind of power.

Again it depends. If your question is about poems, they begin as inchoate problems. Sometimes, after they’ve been hanging around as a kind of hum, they introduce themselves by title. But in the case of “pieces” the problem is present at the outset, like an assignment, so the solution ends up most likely as prose. My ideal would be to combine the two in a single, unimpeded way of life.

I wish writers could position the new cosmology, post Hubble, Heisenberg, and Higgs, in a language that makes it inescapably natural. It should render the fear merchants ludicrous, as we know they are.

Well, this sounds like a tautology but the role of the writer is to write. Everything else is application and puts off the muse.

When I wrote speeches for a living I got accustomed to the many edits you might need to satisfy a client. You couldn’t afford to resent them. Plus, they focus you on the destination of your words. So I learned to edit myself ahead of time. But the outside editing of an essay is rare in my experience, and of poems it just doesn’t happen.

The most memorable advice came from John Ashbery, when I had complained of being nervous about doing something. “I always find you’re saved by your own charm,” he said gently. Imagine the power of that, if you could put it in practice. It certainly worked for him.

10 - How easy has it been for you to move between genres (poetry to essays)? What do you see as the appeal?

Too easy, and as I said earlier my ideal would be to make them the same. Freedom and accuracy at the same time.

Though I’d love to be among the writers who work at a certain time of day, for their whole lives, this would be a luxury that doesn’t always fit your responsibilities. For poetry, the best would be to procrastinate all day and start writing at four in the afternoon, trusting someone else to have dinner waiting at ten, or whenever I chose to reappear. For an essay I’d want to start after ten and write until five or six a.m. Life, obviously, is apt to intervene.

I like to go to a place, even if it’s just outside, and look at it. Emerson said we are never tired as long as we can see far enough. Oatmeal cookies help too.

Silage, manure, freshly mown alfalfa; or all at once.

McFadden was right. Of course the other four—nature, music, science, and art—are all motivational too. What’s left? I guess I’d add love and the strange goads that come with it: anger, humiliation, guilt, desire, and care. They may not seem like forms but they are.

When I began to write speeches for a living I met an older speechwriter, Joe Brickley, who had a lasting impact. It’s past time to acknowledge him. From Joe one learned to be amused by the tricks a writer employs, the play-by-play that gets you from beginning to end. In particular he taught me to recognize as egotism the kind of writing that itemizes every alternative. He called it the “on-the-other-hand-he-wore-a-glove” school of writing, where you balance everything and say nothing. That liberated my poetry as much as prose.

Become proficient with a chainsaw. There are a lot of trees here and the dead ones fall across the paths and get in the way.

One of those aptitude tests they gave in high school, the Kuder Preference Test, said I should have a career in agriculture.

In law school I hated the drudgery. I took a couple outside writing jobs and discovered in their case I almost liked the drudgery. If I was writing a poem you could even say the drudgery kept me in thrall. So it took too long, but eventually I dropped out of law school and looked for a way to write.

I read recently a terrific first book, Irredenta, by the poet Oscar Oswald. His project, apparently, was to re-purpose the pastoral poem for a decolonized, climate-threatened, politically uncertain North America; and he succeeds in ways I couldn’t have imagined. So I looked again at the great original, the Idylls of Theocritus, which I honestly didn’t remember very well. It turns out, if we ever thought pastoral was precious and irrelevant, we couldn’t be more wrong. As Oswald says in an essay for Lit Hub, there is no pastoral without threat of evil, doubt in our beliefs, or “rebuke of their slack power in the face of calamity.” From Theocritus it’s an inevitable step to the Eclogues of Virgil, Leaves of Grass, and Irredenta. They amount to an epic more durable even than film.

The answer to that is always the same: It’s too early to tell.

Posted by rob mclennan at 8:31 AM
Labels: 12 or 20 questions, Douglas Crase, Nightboat Books