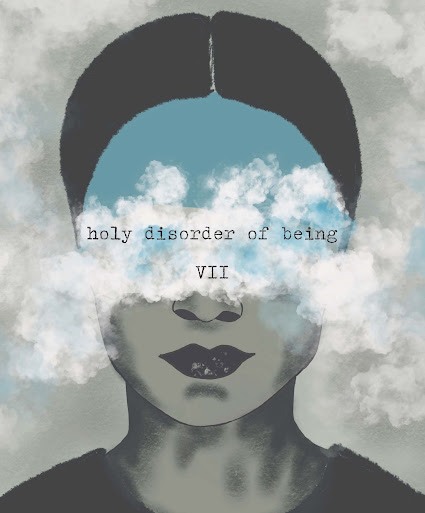 Another season of home, as the potential for nonsense descends, again, into Ottawa’s downtown. I care not for the deceptions, disruptions and dishonesties of these right-wing convoys (especially aware of how too many of them are being utilized as cannon-fodder by background interests with far darker agendas). But so it goes. Perhaps today is a day (among so many other days when such should be attended) to donate money and attention to one of the multiple charities that focus on Indigenous people and communities across the country. Happy Canada Day, indeed.

Ottawa/Toronto ON: I didn’t see their collective debut, Towers (Collusion Books, 2021), I was curious to see the second chapbook-length offering, holy disorder of being (Gap Riot Press, 2022), by VII, an Ottawa-based collective and collaborative group that self-describes as “seven voices fused into one exquisite corpse: Manahil Bandukwala, Ellen Chang-Richardson, Conyer Clayton, nina jane drystek, Chris Johnson, Margo LaPierre and Helen Robertson. Based on the belief that seven minds are better than one and that many ideas make joyous chorus, we say: We are I and I is VII.” I’m fascinated by an ongoing collaborative group, aware of numerous examples of pairs of collaborators over the years, but scant examples of more than two: Pain-Not-Bread comes to mind, after the collaborations between Kim Maltman and Roo Borson brought on a third. The only other examples I can think of are sound poets, whether The Four Horsemen or Owen Sound. Are there any I’m either unaware of, or just not recalling?

take those ripped envelopes from the desk drawer
takeout containers from moth-filled cupboards, them too
take off the bovine-patterned briefs with the crotch chewed out, trash ‘em
take the soil from the shed where squirrels make scratchy holds
take up knitting or running or raking
tag friends witty Twitter posts
attack the accordion folder, sort
tackle the overgrown hard drive
tack glow-in-the-dark stars to the ceilings
tack glow-in-the-dark stars to the backs of our hands, let us
be the stars you don’t know are planets
be a green blink low on the horizon
be a moth mistaken for dust
be a memory of a library, an inflatable domed planetarium
be a rum-coloured ache the shape of a moon that’s not a window’s lemon light
not a clock’s ochre glow, not a burner left on through the night

The combined experience of the group is interesting to consider together, as every participant has published a single-author chapbook, with multiple already published first books (Manahil and Margo) and even a second (Conyer), and various of the group (Chris and nina, and possibly one or two others) have worked extensively with jwcurry as part of his sound poetry ensemble/choir, Messagio Galore. VII’s holy disorder of being appears to be exactly what their title suggests, a fragmentary, disconnected mix of styles, shapes and syntax, still feeling through what might be a rather complicated exploration to arrive at a coherent offering through seven different, distinct participants. Set as a chapbook-length assemblage of untitled fragments, lyrics pool into rhythmic and rhetorical corners before splaying off into other directions, from prose poems to full-page poems of expanded, open spacings (akin to American poets Jessica Smith or Melissa Eleftherion) to short, haiku-like bursts at the tail ends of what might be utanikki. The collection exists in a form wide open, blending a disorder into polyphony; not as a choir, but as a deliberate, ongoing collage. Either way, I am curious to see how this collective develops.