I reached up and into her sentences as though I were being pulled out of gravity because, for the first time in my life, I was encountering writing that felt organically similar to what was happening inside my mind – but, to be clear, I was not at all in control of the thoughts, or the words; my thoughts were broken here and there with clichés and fawning. Sentimentality was possible. Yes, she was sections of them all, and they were sections of her. ‘We are shaped by time and tide,’ I wrote, ‘exposed to the elements.’ I quoted directly from The Waves: ‘I have lived a thousand lives already. Every day I unbury – I dig up. I find relics of myself in the sand that women made thousands of years ago’ (127). I allowed more guessing about who, or what, Woolf was.
Of course, the question really being asked here was, who am I? (“Prologue”) 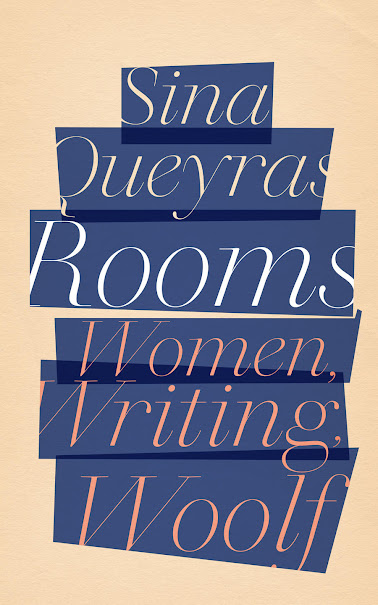 Montreal writer, editor and critic Sina Queyras’ latest title is Rooms: Women, Writing, Woolf (Toronto ON: Coach House Books, 2022), a book-length essay/memoir that works through the author’s reading of Virginia Woolf, and how an early introduction to Woolf’s work offered them a way not only out but through an upbringing punctuated by abuse, poverty, loss and trauma. As Queyras’ writes early on: “It’s almost true that I have published only a handful of short stories and one novel – one that experimental novelists might argue is conventional and conventional novelists might describe as experimental – but I have, like Woolf (although certainly not at the same level as Woolf), studied, read, written, critiqued, and thought about writing across genres for more than thirty years. / Is that enough to convince myself that I might have something to say about Virginia Woolf?” Rooms: Women, Writing, Woolf is an essay on influence, an essay on Virginia Woolf and a memoir of trauma, offering the details of how Queyras “got here from there”; how a discovery of Woolf’s work early on allowed them an example of how to lift beyond a dark history, and literally write themselves into the possibility of something else. “How did people who survived such trauma ever achieve smoothness in their lives? Equanimity? How did people who didn’t assume for themselves the right to safety, achieve safety, let alone perceive themselves as having a voice? As writers? Artists? Anything beyond a basic survival mode? It was bullshit. How could you tell your story if your story wasn’t one the world wanted to hear?”

Queyras writes of their reading and post-secondary experiences, of their relationships. They write of reading and experiencing the work of Adrienne Rich and Toni Morrison, Constance Rooke and Evelyn Lau, Jane Rule and Sylvia Plath; of academia, gender, sexuality and violence, and of linearity, writing on Woolf as figure, influence, possibility, anchor and example. “Lau wanted – and deserved – a literary career,” Queyras writes, describing a Constance Rooke reading and post-reading conversation during their time at the University of Victoria, and hearing the audience of predominantly older women tut-tut what they were hearing about Lau’s then-forthcoming memoir, Runaway: Diary of a Street Kid (HarperCollins, 1989), “and the way she found a book contract and entry into literature was by dragging herself through the streets and living to tell about it. Isn’t this why Sylvia Plath published The Bell Jar under a pseudonym? Because she saw that story as something not yet transformed? Too close to the bone? Something other than literature? Is this the women’s literature we’ve been fighting for?” Queyras writes of working and feeling through form and the difficulty of being present. They write of being transformed.

The text itself made me. It demanded a response. But it also literally made me.
And that is no small thing. Again and again, whenever I lose my way, I go back to Woolf. I go back to her texts and realign myself. Bring all the folds of my being into the work. I go back to the sentences that appear to contain while trajectories – subtle and extensive – and look up into them. I feel a complicated lineage. They appear before me like cathedrals and street maps, like soft spaces to settle, like flares, sent up in moments of anguish and adoration, lighting a path I can always go down. They appear like furrows of joy I might harvest. They appear like girders, vertical and reeking of futures Woolf herself could not have foreseen.

Queyras writes of an ongoing fight for space, and attempting writing not simply as a mode for thinking and responding but one through which best to experience and live. In Why Must a Black Writer Write About Sex? (Toronto ON: Coach House Press, 1994), referencing his infamous debut, How To Make Love To a Negro (Without Getting Tired) (Coach House Books, 1987), Dany Laferrière wrote of how he wrote that first novel to “save his life.” This is “no small thing,” as Queyras well knows, and they centre their third poetry collection, Lemon Hound (Coach House Books, 2006) as the beginning of where they wished to exist as a writer; the collection that first achieved what they were aiming for (and allowing all else to follow). Through the precise sentences of Rooms: Women, Writing, Woolf, Queyras writes of the failures and attempts, the stumbles and missteps, and how Woolf remained an anchor through the worst of it. “It had been my intention to follow in Woolf’s footsteps – a ridiculous desire,” they write, early in Chapter One, “because of my impoverished education and the fact that essay writing has always been a challenge. But journalism, of a kind, and speaking to the common reader, have always been goals (as well as my first writing experience). Creatively, I wanted to try it all: write plays, novels, and essays, not only poetry. I fell, however, not to essays, but blog posts, and those devolved further into tweets. I meant to write more novels but wrote only one before I was caught up – for better and worse – in parenting and the business of a creative writing department. Or, with capital-S Service and Patriarchy.” Through Women, Writing, Woolf, Queyras writes on the pull and possibility, the destructive nature of rooms; finally able to remove themselves from one before even able to entertain another; they write on exactly what proponents of literature offer as the best example of what reading can offer: the transformative possibilities of the experience.

It isn’t until I say this out loud that I realize this is one thing I am trying to make clear in this book. the way that there can seem to  be no exit at all from the trauma of the body. That it is ongoing. That we have all accepted this, not only for us, but for our children. And for our students. And that the room can be a place that keeps us apart from ourselves and the world. The room can easily become a closed door. A locked place. A prison of our own devising, or our own resignation, and that we have to get out.