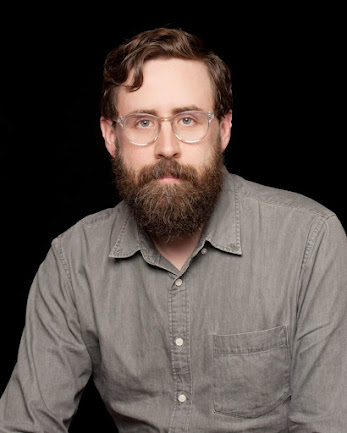 Lawrence Giffin [photo credit: Michael Ian] is the author of several books of poetry, including Untitled, 2004 (After Hours Editions, 2020), Plato’s Closet (Roof Books, 2016) and Christian Name (Ugly Duckling Presse, 2012). He is a co-editor at Golias Books.

1 - How did your first book change your life? How does your most recent work compare to your previous? How does it feel different?
My first book, Christian Name, changed my life in two ways—for the better, because I was finally done with it and done wondering whether or not I was really a poet, and for the worse in that it fooled me into believing I really was poet.

Certainly, publishing has nothing to do with being a poet (I’m unclear how one is ever a poet when not actively writing a poem); still, as meaningless as it is, it really is everything. As far as how my work has changed, I’m not sure I’m the best judge, since I can only describe my side of it. There is a greater desire to say “something real,” but also a greater suspicion as to the very possibility. There is a greater fear of turning out to be a bullshit artist and greater recognition that likely this is the case. Does any bullshit artist think of themselves as such? The value recognition of praise, even simply in the form of a publisher’s willingness to print it, inevitably diminishes, and one is forced to reckon with the various motives, noble and ignoble, that have been driving one’s practice for so long, often unconsciously, and which now may appear shameful or misguided. This revaluation generally has a positive effect, but it is equally painful and frightening.

It’s good to have something else to fall back on. Adam Phillips tells a story of a poet who told him it’s good for poets to have day jobs, “otherwise they start to believe that they really are poets.”

2 - How did you come to poetry first, as opposed to, say, fiction or non-fiction?
I didn’t. I tried my hand at fiction first, but I wasn’t very good at it, and I didn’t have the smarts or attention-span to write non-fiction or, god-forbid, philosophy, so I became a poet. I have a hard time putting myself in the reader’s shoes, and poetry rewards that.

3 - How long does it take to start any particular writing project? Does your writing initially come quickly, or is it a slow process? Do first drafts appear looking close to their final shape, or does your work come out of copious notes?
If the work comes at all, and it does, though rarely, it comes out fairly close to its finished form. For me, if a poem requires heavy revisions, it’s because something isn’t working on a fundamental level—in my case, usually, it’s trying to do too many things at once, without a cohesive frame—and quickly falls apart under the tiniest of revisions.

4 - Where does a poem usually begin for you? Are you an author of short pieces that end up combining into a larger project, or are you working on a "book" from the very beginning?
I begin by writing. It always begins with actually writing something, whatever, on and on—abandoning some poems, returning to others, starting over—until something takes, that is to say, a line or a phrase, some actual string of words, seems to me compelling and generative, and then I follow that until I get bored or feel like it’s over. It doesn’t mean that what I write will be any good, only that I have to stumble on it—I can’t plan it out ahead of time. I hardly ever come to the page with an idea or theme. I always have to start with some bit of text that happens to evoke more text.

I rarely set out to write long poems or short poems. Since I never set out to write this or that kind of poem to begin with, it’s equally unknown ahead of time how long a particular poem would be. I’d like to try writing shorter poems because I think most people prefer to read less rather than more.

5 - Are public readings part of or counter to your creative process? Are you the sort of writer who enjoys doing readings?
I don’t often enjoy attending them, and rarely enjoy giving them. That said, they aren’t counter to my process any more than they are necessary to it.

6 - Do you have any theoretical concerns behind your writing? What kinds of questions are you trying to answer with your work? What do you even think the current questions are?
Nothing explicit, though I certainly have interests and preoccupations which cannot fail to give the work a vague sense of coherence. Poetry is particularly poor at answering questions (or even forming them), and anyone who tells you otherwise is trying to sell you a load of bullshit. If poetry is anything, has any being, it can’t be the sort of discourse about which questions can be posed ahead of time, as if the answers already exist and are merely waiting to be uncovered. People who look to poetry for answers to life’s most pressing questions are already beyond help.

I do think poetry can bring us into contact with our insignificance and congenital fragility without turning it into the substance of a supreme (and supremacist) nihilism, though it might do that as well (the Iliad is an example of this danger, though Thersites’ objections to the war and his subsequent humiliation gives the poem a whiff of the absurd). Poems make fools and knaves of us all, writers and readers.

7 – What do you see the current role of the writer being in larger culture? Does s/he even have one? What do you think the role of the writer should be?
Clearly the role of the poet is to assuage our fear that, really, no one knows what is going on. Poets relieve us of having to hope or believe ourselves. They believe for us, on our behalf. Maybe this answers Hölderlin’s question, “what good are poets in lean times?” They get us through rough patches by spouting reenchantment propaganda.

8 - Do you find the process of working with an outside editor difficult or essential (or both)?
Both. Neither.

9 - What is the best piece of advice you've heard (not necessarily given to you directly)?
Make mistakes.

10 - What kind of writing routine do you tend to keep, or do you even have one? How does a typical day (for you) begin?
I can’t keep any routine at all, much less one around an activity as frustrating and demoralizing as trying to write a poem. I long ago gave up on the hope that I would learn to schedule things with a sufficient level of granularity or wake up early to compose my silly little verses. As long as my kid is safe, my partner feels supported, and the laundry is done—success. Were poetry a similar prerequisite, I’d have given up long ago.

11 - When your writing gets stalled, where do you turn or return for (for lack of a better word) inspiration?
If the writing gets stalled, it’s usually because I’m trying too hard. The only way out I know is to keep writing, to stop trying to write and write, whatever comes out. Like I said, something has to take, but that something has always to be already written before I can stumble upon it. It's a dilemma, like Baron Munchausen pulling himself up by his own ponytail, and one which can be addressed only by a mad scribbling.

13 - David W. McFadden once said that books come from books, but are there any other forms that influence your work, whether nature, music, science or visual art?
Philosophy, physics, psychoanalysis, evolutionary biology, game theory, algorithmic information theory, Greek mythology.

14 - What other writers or writings are important for your work, or simply your life outside of your work?
Perennially returning to Bataille, Heidegger, Schuyler, Ashbery. Have of late been reading Wittgenstein, Adam Phillips, Montaigne, Nicole Loraux, Seth Benardete, Hans Blumenberg. Diderot still manages to scandalize me. Recent poetry that sticks out includes the late Iliassa Sequin’s collected, John Coletti’s Deep Code, Josef Kaplan’s Loser, Denise Riley’s Say Something Back (reprinted by NYRB with the remarkable Time Lived, Without Its Flow), and Gordon Faylor’s Want.

15 - What would you like to do that you haven't yet done?
Inherit a fortune.

16 - If you could pick any other occupation to attempt, what would it be? Or, alternately, what do you think you would have ended up doing had you not been a writer?
Who can say? For one, writing is not my occupation, if that means what occupies the greatest amount of my time or where I get my money. Certainly, thinking I am a poet occupies great swathes of the day, but actually writing, no.

Were I not who I am—every capricious decision and accident of fate—I would be someone else, and since there are plenty of other people, I am already doing all the things I would be had I been somebody else.

17 - What made you write, as opposed to doing something else?
I’ve always found reading—holding onto an idea, following a thread, understanding the stakes—difficult. And people are a mystery to me—their motives, why some things make them happy and other things sad, why they want the things they want. I suppose writing addressed those twin mysteries and promised not only access to them but the privileged access of a poet. But such access is not truly possible, and even if it were, certainly poetry would not be the means.

I find the idea of a reader to be utterly incomprehensible, so that when I try to write for an idealized reader, the figure in my head quickly becomes monstrous, and when I don’t write for the reader, I seem to default to addressing some bitter and hateful deity.