Tide was a motor,
gap in the sparkplug

of a storm.
Rockweed choked

the beach in wire,
cable running

the pitchy bottom.
Through rotten

in the basement
drain. The sump

ran all night,
jerrycan of diesel

at the basement
stairs. Nothing stopped 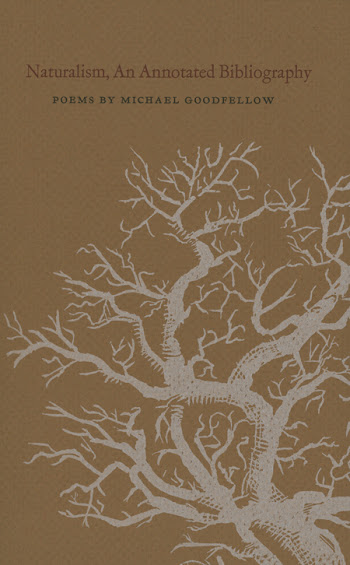 I’m fascinated by the single, staggered, unbroken sentence of Lunenberg County, Nova Scotia poet Michael Goodfellow’s surefooted lyric as displayed in his full-length debut, Naturalism, An Annotated Bibliography: Poems (Kentville NS: Gaspereau Press, 2022). Through an assemblage, nearly a suite, of short poems, Goodfellow offers a descriptive layering of landscape across the connective tissue of his self-described “small waterfront acre,” rippling slowly out from that central, singular focal point of roots, observation and interaction. He writes of home and his landscape, offering a lyric of the right words in the right order, and a tangible and concrete poetics of light across the water, the movement of human culture and sunsets, beaches and sullen hillsides. “The moon rose behind us,” he writes, as part of the poem “HIRTLE’S BEACH METONYMY,” “an animal // staring out the brush. / The thick, you called it. // You had other words for things, / you tongued them out, letting them shape // in the air, then dampen: / sand the colour of bark, // how night was the green of a burnt forest, / how years leaf-out loss, // their bloom.” Goodfellow’s approach to “naturalism” offers exactly what the word entails: the belief that everything depends upon that accurate description of detail, and his is certainly that, writing a lyric deeply attuned to his specific time and place, allowing it to breathe and react, attempting to determine and detail without overt interference. Even if a reader might know this place, this scene, Goodfellow’s tone and temper offers up a glimpse into the heart of it. “Ashley Conrad owned a general store,” he writes, as part of “HUNGRY,” “the kind that sold can goods, tobacco, salt, // whiskey, snowshoes, handwoven nets / and things the neighbours made—trade a rake // for a bristle broom, apples for a hooked rug. / The Depression was in another country. // No one along the river went hungry / or lacked a thing they needed.”

What intrigues about this collection is in how the lyric is textured, certain of itself while feeling out what words might best capture, or hold, more solid in its approach; a thickening lyric reminiscent of certain poems by Don McKay during the era of his Birding, or Desire (McClelland and Stewart, 1983). Or, as the fourth poem in the seven-part sequence “BOOK OF DAYS” reads, titled “Hop Bar”:

Metal slammed
to leave a hole,

water the suck
of wet dirt,