keys from my sonar
on the letters
the trees, the delicious frownflies
cellunotes

prickling births
on air glutted with sensewine,
fruit crooking me,
i go suckling after all species

why this one place that’s me
while the sououound
ripples and i
wripple in it, in faroff chimes

the city
is verywhere,
as much here
the pan frenzy fills my ears

and then no bat,
but visible audio
no shepheard
just remembrance, ocation, form

I am completely taken by the charming flips and phonetic twirls and twists of Sunnyside, New York poet Brandan Griffin’s full-length debut, Impastoral (Oakland CA: Omnidawn, 2022). There is such song in his ecopoetic, furthering a particular rich strain of ecological lyric that has rippled across Omnidawn publications for the length and breadth of my attention to their titles: book-length examinations of ecological possibility, articulating both the positive and negative, including indictments and responsibilities of humanity’s disruptive manner. Through the structure and content of his Impastoral, Griffin is reminiscent of the work of Brian Teare (who blurbs the back cover of the collection)[see my review of his latest here], composing moments as much physical upon the page as meditative. It’s hard not to see either Teare, or even the physicality of CAConrad [see my review of such here] through such poems as “SEW AGE TREAT MENT PLANT,” that includes: 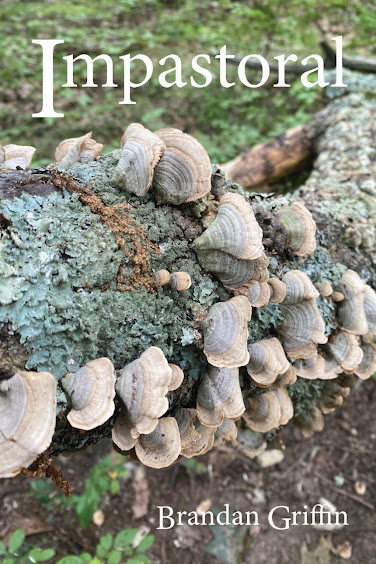 As well, the use of twisted language is reminiscent of what Conan O’Brien said of the late Norm Macdonald’s work as part of Macdonald’s recent posthumously-released final comedy special, how Macdonald would deliberately mispronounce the occasional word during talk show appearances, aiming to keep listeners attentive, and even slightly off-balance. Griffin, on his part, appears to be less about off-putting or keeping one off-balance than to offer something further, extra; a way of offering a new sequence or element of shape or sound or meaning to extend possibility, as the poem “ANIMALS LIVES IN PLANT,” offers: “un / conscious leaves / on green yarn / the / yairn falls and floats up in / telepithy [.]” The sense of play begins with the visual, rippling out into meaning and sound, prompting both pause and propulsion in ways that echo, as well, elements of the late bpNichol, Montreal poet Erín Moure or even the possibility of created and/or mismashed wordplay of Paul Celan (or Lisa Robertson or George Herriman’s Krazy Kat): offering and adding and even layering both meaning and intent. The same poem, further down the page: “plant on table in front of books / blooks on / tlable / in twowo clusters of leaves gathering up // twu upclusters of leefeafing / turn faces / w their yellow streaks to me / next to me, to // winsundowlight [.]” There is such a delightful way that Griffin’s otherwise-mangle of deliberate misspellings is compelling, welcoming and utterly charming, bringing the reader into his song of true, central awareness. Despite my own upbringing in rural landscapes, it might be only through Griffin that I can finally be able to begin to understand. Or, as the final poem of the ten-stanza “PROBE” provides:

Then I saw beyond this
froth of variables.
no I don’t quite see I have
a boundary. over
where I end, found that
I end. What to be, the strands
My directives
cauterized. Something crops up,
it’s beyond me.

Posted by rob mclennan at 8:31 AM
Labels: Brandan Griffin, Omnidawn