we used to go to the Bulgarian Bar but not together

the place on Broadway & Canal whose motto
was helping ugly people have sex since 416 BC and
it probably had another name but everyone
only knew it as the Bulgarian Bar where
Gogol Bordello frontman Eugene Hutz
who was very sexy in that sweaty limber way like
Mick Jagger but much skeezier & with a thick
Ukrainian accent DJ’ed Gypsy music & we
figured this out somehow while reminiscing
about our 20s in NYC via text & our 20s
in the city were PowerPoint temp jobs were
stealing rolls of toilet paper from restaurant
bathrooms were pagers & flip phones & pay
phones were July subway platform infernos
were whiffs of hot copper & pee & trash
were walkup cockroaches were dive bar
makeout sessions were chain-smoking on
fire escapes & unspecified parades rolling
past tall office windows were brick façade
or window casements falling to the sidewalk
& shattering at our feet were illegal sublets
& late rent checks & spit-shined heartbreak
when nothing & nobody depended on us &
she said, Did I tell you I head-butted a girl
in the face there one night dancing?
Not on purpose but still …

The author of six full-length poetry collection, including Ideal Cities (HarperCollins, 2010), Copia (Rochester NY: BOA Editions, 2014) and Holy Moly Carry Me (BOA Editions, 2018) [see my review of such here], the latest from Virginia poet Erika Meitner is Useful Junk (BOA Editions, 2022). Useful Junk is an assemblage of narrative stretches and storytelling lyrics of nuance, wit and considered space. Meitner composes evocative landscapes of broad strokes and fine detail, whether writing on nostalgia, sex, lost friends, ex-lovers and illicit cigarettes, and there is a rush to her lines that occasionally leaves one breathless. “I want to tell you about the crampon guy you’d laugh so hard,” she writes, as part of the poem “Elegy with Lo-Fi Selfie,” “because / in college remember New Hampshire winters some days our scarves // welded to our lips froze to our cheeks with just an inhale’s vapor / your breath your breath is gone & now I want to take a picture // of my ass to send to you because I think you’d think it was hilarious / or sexy or possibly both [.]” She writes of moments fleeting and long past, and how to hold on best to those as they occur, as she offers as part of the poem “I would like to be the you in someone’s poem”:

They say put me in your fictional poem because we are all fictions, because the way the hot driveway feels on my bare feet when I go get the mail at 5 p.m. is not real—not the walking or the heat stored up all day then emitted from cement or the paper in my hands addressed to me 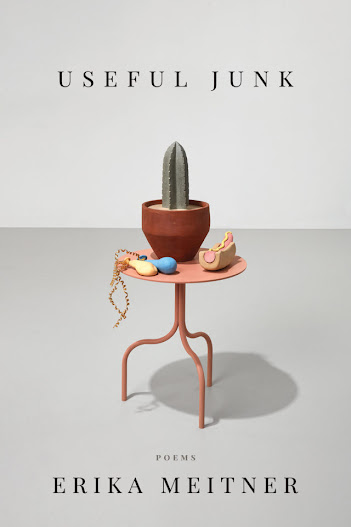 Writing out repeated selfies (including at least one nude) and the occasional voyeurism, her poems are vast, contained and ambitious, composing lyric sentences that pull and push across the page in a deeply physical way. Hers are poems set in the body, writing out and through ways of depicting, seeing and self, as well as how we carry and broadcast ourselves. “Yves,” she writes, as part of the poem “Médium Adam 25,” “listen: we are making // art because we want to inhabit everything / and not fear it.” There is a way she writes seeing the self at a point where one begins to see and even fear change, aging away from reckless youth, and wishing to still appear vibrant, even dangerous, half-pleased to watch those naïve and self-destructive encounters fade into rear-view, and half-mourning the loss of those feelings of freedom; one can see the awareness of aging through these poems, with a slight glint of fear: of mortgages, divorced neighbours with teenaged children and in a knowledge that her younger self couldn’t have possibly known. “I don’t know / if there’s a god,” she writes, as part of the poem “A Temple of the Spirit,” “but sometimes we are asked / to carry a baton for long periods of time as if / we’re in a relay and can hand it off to the / next person waiting usually somewhere other / than the place we began, though that action is / so tricky and fails often.”

Or the end of the breathless prose-sentence of “from this thought a hazy question,” a kind of self-aware and sexy improvement on the mythologies of the American road trip, what Jack Kerouac couldn’t have yet begun to imagine, in a rush and a sweep akin to that final paragraph of On the Road, as Meitner’s poem concludes: “when I had my first cigarette since 2007 and it was better than / I remember anything being—an incandescent American Spirit I bummed / from my friend Wayne on a bar porch and there I was smoking in the / warm March evening while traffic shushed past on Main Street, the tip / lit like a taillight then vanished to ash like a car driving off in the dark / each time I inhaled and can I ask you again to tell me about my body, / to introduce me to my own luminous skin?” She writes of “useful junk,” but these are the details that become most important, the ones that provide the elements of a real life, truly told and truly lived; what might otherwise get tossed aside in the retellings. One might refer to these poems as ‘poems of hope and experience,’ as Meitner is clearly aware enough to know what might be lost, and might be gained, and what might need to be sacrificed for the sake of getting there; but yet, these poems are entirely propelled by a hope that she will eventually make it. As the poem “Swift Trucks” ends:

When the world spoke to you
it said stay. It said fragmentary.

It touched your face, your