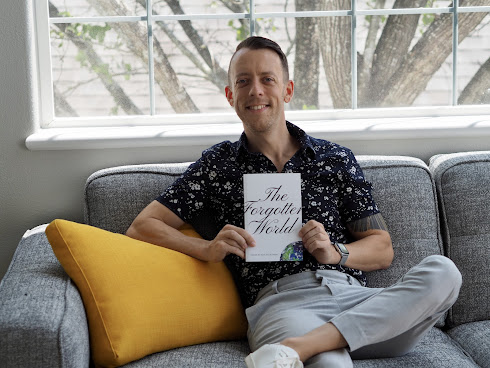 Nick Courtright is the founder and Executive Editor of Atmosphere Press. He is the author of The Forgotten World, about Americanness and identity in a vast global culture, Let There Be Light, called “a continual surprise and a revelation” by Naomi Shihab Nye, and Punchline, a National Poetry Series finalist. His prose and poetry has appeared in such places as The Harvard Review, The Southern Review, Kenyon Review, Boston Review, The Huffington Post, The Best American Poetry, Gothamist, and SPIN Magazine, among dozens of others. Find him at nickcourtright.com.

I think my first book, Punchline, which came out in 2012, gave me a sense of relief. Not validation necessarily, but I think it freed me to write when I wanted, rather than write as if life depended on it.  My newest book, The Forgotten World, is my third, and by far my most personal book, and my book most rooted in the real world, rather than any sort of metaphysical space. Being the Executive Editor of Atmosphere Press, which is not tied to the academic calendar, gave me the opportunity to explore the world more fully, and that exploration made for a book set in places, rather than in the one place of the abstract.

I actually came to fiction first, back in high school, but poetry eventually became my mode. I was more interested in ideas than I was in telling stories—the invention of characters and plots started to seem like a weird game to me, whereas with poetry I could run straight at a problem, whether it be love, the universe, or culture.

I used to write prolifically, but now I take my time. My first two books were released two years apart, and it wasn’t until seven years later that I had a third. I wrote probably three books worth of material between that second and third book, though—I was writing whole books and chucking them. I think I needed to go through that process to get something that felt most authentic. As for drafts, they are usually 90% of what the final will look like, but that other 10% can take eons to figure out.

I’ve done both, and for The Forgotten World it became clear along the way that I was writing a travel book and a book about the intellectual struggle of being American while not in America, and respecting cultures that have been mistreated by people who look like me. Once I realized that that was the subject matter I felt compelled to write, I just had to spend the years it took to go the places I needed to go to learn. This book is a product of years of feet-on-the-ground research in a way my others weren’t.

I do enjoy readings, and I think going on tour for my first two books changed me substantially as a writer. I realized that I wanted to entertain and be accessible on a first listen, rather than just write poems that have to mulled over many times in quietude. I always imagine my poems as being read aloud, though some of them are better suited for this than others. But connecting to the random folks you find in an audience became a key part of my vision for the type of poet I wanted to be: engaging and challenging, but very much not elite.

I think the question of accessibility is a major item, and what is the goal of poetry? Why do we do it? I believe that writing is mostly something we do for ourselves, even if we have big goals of connecting to others—the act itself, the pleasure of refining one’s work…so much of it is just a hobby to enjoy, with the hope that someone else enjoys the product being secondary. In my PhD we often discussed matters of the lyric, “the overheard,” etc., and I do buy this idea, though lyric can be both navel-gazing and also a means for intellectual problem-solving. I think poets, given the economic limitations of the art (so long as their output isn’t connected to career advancement in academia) are freed to be their own souls.

Connected to the previous answer, I think one of the greatest roles of writing is to make the writer a more satisfied and content person. People often look to the value of a writer in relation to a reader, but I think the contrary view of what the writing does for the writer is more interesting. If all these writers weren’t writing, would they be less fulfilled individuals? Of course, the role of the reader is where this question would usually go, but as someone who helps writers every day with Atmosphere Press, it’s the satisfaction that writing can bring an individual that is at the forefront of my mind. Writing as art is a public service to the creator as much, if not more, than it is to the outside viewer of the creation.

Both, haha. It’s always tough to hear the thoughts of a good editor, because a good editor will challenge the writer. But…you’ve gotta hear those thoughts, because they’re going to help the work. You don’t have to work with an outside editor, but it’s almost certain that you won’t see everything your work has to offer.

From Nobel economist and psychologist Daniel Kahneman: no problem is as important as it seems when you are thinking about it. It helps keep things in perspective, and keeps the anxiety from going crazy. All things are transitory, and the sun is only too bright when you are staring directly at it.

10 - How easy has it been for you to move between genres (poetry to prose)? What do you see as the appeal?

My main art form nowadays is writing emails. That’s my primary genre, haha. I try to put a little of the poetic in there, though.

I don’t keep a rigid writing routine, other than the aforementioned emails! A typical day begins for me with coffee and work at around 6:20am. Bright and early!

Books of poetry. That’s really the key thing that gets my mind in the mode to write poetry. That and place, but really, it’s just finding a book of poetry that inspires me to write. They are pretty hard to find, so when I get hold of one, I’ll read it again and again. Recent stars for me were by Anders Carlson Wee, Kaveh Akbar, and Bianca Stone.

Diesel exhaust in the winter. Reminds me of having to ride the bus to school in Ohio in January. I’ve lived in Austin, Texas for nearly twenty years, but every time it’s cold and I catch a hint of this smell, it takes me back to childhood.

I’ve been inspired a ton by science, and by all of these mentioned things. The world is the filter through which the coffee of all poetry must run. That’s an absurd sentence, but you get what I’m saying.

Well, my fiancée Lisa Mottolo is the most important poet in my life. No doubt about that! She’s a great inspiration, and her book will be coming out in 2023 with Unsolicited Press. It’s gonna be awesome and devastating. Just on the literary front, though, I’ve always found kinship in Robert Bly, Federico Garcia Lorca, and the Bhagavad Gita, and my PhD work was on Whitman. These have all had a big effect on me. Emily Dickinson took me an eternity to comprehend in the slightest, but her genius is remarkable.

Gotta get Antarctica and Australia. Those are the two continents I still need to see. I’m also psyched to be a grandparent, but since my kids are 12 and 8, I’m good waiting another twenty years, haha.

I was a professor for a long time and thought that was what I was going to be, until I somehow found myself the Executive Editor of a successful publishing company. Weird how life does that. If I’d gone a wildly different route, I think I would have been an architect. Which is basically just poetry, except for buildings.

Had no choice when I was young: even when I was in elementary school I was always writing stories. Writing picked me, not the other way around.

Wine Simple by Aldo Sohm. Of course, this isn’t a literature book, but as someone who was totally ignorant about wine but wanted to learn, this was the perfect way to get started. Hard to say the last great film I saw, but I will mention the Italian film La Grande Bellezza as a great work I come back to again and again. It is a piece of literature.

I’m working hard on the most ambitious artistic undertaking I’ve ever pursued, and that’s running Atmosphere Press. There’s always so much to solve, so many processes to refine, so much magic to witness. It’s a creative act every day, and the satisfaction I get from designing a workflow that will help my team and help our authors…as crazy as it sounds, it’s no different than landing the right ending for a poem.