reading in the margins: Kristjana Gunnars 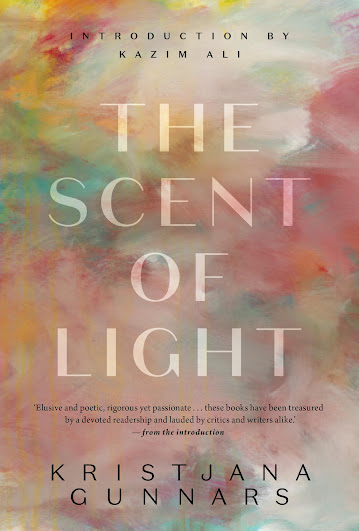 I’m appreciating the reminder of how important Kristjana Gunnars’ novels were to shaping my early thinking on writing, thanks to The Scent of Light (2022), a reissue of her five novels—The Prowler (1989), Zero Hour (1991), The Substance of Forgetting (1992), The Rose Garden: Reading Marcel Proust (1996) and Night Train to Nykøbing (1998)—in a single volume, offered with a stunning introduction by American poet and critic Kazim Ali. “Perhaps it is not a good book, he said, James Joyce said,” Gunnars wrote, to open The Prowler, “but it is the only book I am able to write.” I most likely picked up second-hand copies of those first three novels somewhere in my early twenties, possibly from the now-defunct Richard Fitzpatrick Books, a store that sat somewhere along Ottawa’s Dalhousie Street. Returning to these novels, I’m startled by how deeply some of these sentences resonated, and became foundational for my thinking of, and approach to, composing fiction. The very notion that we write the books we do and in the ways that we do, in large part, because we simply haven’t the ability to write them in any other way. How did you do that, someone might ask. Practice, intuition, judgement. The question becomes unanswerable, beyond what might otherwise sound flippant. Experience.

I recently read a passage in Montreal poet Gillian Sze’s quiet night think: poems & essays (2022) that caught my attention: “Why do you write? was a question that I was often asked, and my answer for both weeding and writing was Rilkean: I must. Yes, there was something inherently futile with every weed I pilled, but I did so stubbornly, thinking of what Mordecai Richler said: Each novel is a failure or there would be no compulsion to begin again.” I was struck by Richler’s quote (I would be curious of the context around the original source), one that suggests a difficulty around such an adherence to scale: the massive narrative undertakings of his novels, writing hundreds of pages encompassing such a wide swath of detailed, world-building, narrative prose. The scope of works might be comparable to other Canadian writers of his era such as Margaret Laurence or Robertson Davies. Each novel, Richler said. Well, each novel of his, maybe. As with the example of Gunnars, my own sense of writing is not to encompass the whole world, or even the whole world of a space, but a particular portrait of a scene or a sequence. I don’t agree, I suppose, but it also doesn’t apply. But the difference in approach is interesting.

I spent a great deal of my twenties telling myself that I preferred the French-language aesthetic of writing interior monologues over the English-language aesthetic of the exterior description—pages upon paragraphs to describe every inch of a tree, for example, or what colour a particular character’s hair might be—none of which I considered required unless it is actually essential for the story itself. It took years to realize that my prose didn’t require dialogue, something I didn’t know how to include either way. I wonder now if it was actually through Gunnars that I became interested in novels propelled by language over cinematic scenes, and assembled via a narrative constructed through accumulation. Whatever else a book-length project might be, at least in my thinking, it is less all-encompassing than a kind of lyric, narrative burst, which relate to my early readings of writers such as Kristjana Gunnars, Elizabeth Smart and Dany Laferrière, all of whom also explored the form of the novel as accumulations, and of auto(biographical) fictions. “For eight hours we concentrated,” Gunnars writes, as part of The Substance of Forgetting, “not noticing time passing. Dawn turned to morning. The sun rose and shone on the water. Once we stepped out and watched the blank stillness of the water. The thick forests of the mountainsides mirrored themselves in the lake.”

“I have sometimes thought: it is possible there is no such thing as chronological time. That the past resembles a deck of cards. Certain scenes are given. They are not scenes the rememberer chooses, but simply a deck that is given. The cards are shuffled whenever a game is played.” I held on to this passage of The Prowler for more than a decade. Thinking back on it now, the notion of memory as a deck of cards shifted the foundations of how I saw the construction of narrative prose. A deck of cards, or a photo album: each section imparts the possibilities of the next. The novel I fumbled to compose across the mid-1990s, titled “Place, a novel,” was a collaged-suite of self-contained bursts that attempted to hold itself together across a very loose narrative, akin to how my twentysomething self understood Gunnars’ novels. It didn’t cohere, but it was certainly the narrative structure I furthered across my two published novels—white (2007) and Missing Persons (2009)—as well as my current work-in-progress. As Ali writes as in his introduction to the new edition:

The struggle of the writer to transform or transmute life into literature in a meaningful way may be why in each book there is a fluidity of time (the story as it happens, but also the narrator writing the story) as well as place (Denmark/Iceland, Winnipeg/Portland, BC, Interior and Coast, Trier/Hamburg, and Denmark/Saskatoon/Calgary). The shifts in time and space are required by the core structure of each book: a writer is writing a book. She writes the book and she tells you about what it was like to write the book.

There is such a lovely and lyric interiority to her passages. Gunnars’ novels exist as much through ideas, theory and speculation, writing internal monologues over descriptive scenes, and writing out the ways in which one writes, far beyond simply offering a story told through sentences. As the opening paragraph of The Prowler reads, in full:

Perhaps it is not a good book, he said, James Joyce said, but it is the only book I am able to write. It is not a book I would ever read from. I would never again stand in front of people, reading my own words, pretending I have something to say, humiliated. It is not writing. Not poetry, not prose. I am not a writer. Yet it is, in my throat, stomach, arms. This book that I am not able to write. There are words that insist on silence. Words that betray me. He does not want me to write this book. The words make me sleep. They keep me awake.

So much of my articulations on Gunnars’ work appear in the past tense, although that shouldn’t suggest I’d been absent from thinking about her writing across those intervening years. More recently, I was fortunate enough to produce a chapbook of her poems in 2016, snake charmers : a cycle of twenty poems, for an event we were both participating in through the University of Alberta’s department of English and Film Studies, celebrating the fortieth anniversary of their writers-in-residence program. A bit later, I produced a chapbook-length essay of hers as well, a moment in flight: essay on melancholy (2020). “There are fragments of eternity in all passing things.” she writes, as part of that essay, suggesting a clear linkage between those early novels and her current work, although the essay was restructured into a long poem, set as the opening sequence of Ruins of the Heart: Six Longpoems (2022). I’m not sure why the difference in structure, but it does alter the flow, just a bit. I am still looking into it.

I love this blog;)