it was easy to form mental pictures
of waves and particles 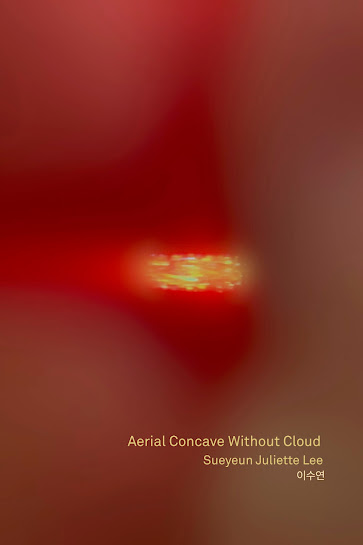 Denver, Colorado-based Korean American poet Sueyeun Juliette Lee’s fifth full-length collection is Aerial Concave Without Cloud (New York NY: Nightboat Books, 2022), a collection that pulls together the sequence, the fragment and an extended accumulation of hesitations and meditations on solar light and basic theory, broad spectrums and refinement, silhouette and clouds. “it has been said at various times / however that the advent of such / vehicles for thought and certain materials,” she writes, as part of the opening sequence, “the appropriate information in the negative,” “obviate our need for insight / reflecting a misconception / as it occurs in the central value / of the human body // a further misconception emphasizes / craft at the expense of / human longing [.]” Across four sections plus opening salvo, Lee examines depictions of light and space, offering, as well, quotes at the offset by Gaston Bachelard and Ansel Adams. She offers glimpses, composing an assemblage of short poems and longer stretches, writing lyrics against her study of light and consequence, and how it falls where it lays. As she offers as part of her “Notes on the text:” at the end of the book: “I composed the primary materials for this book while in residence at Kunstnarhuset Messen (Ålvik, Norway), Hafnarborg (Hafnarfjörður, Iceland), and UCross Foundation (Ucross, Wyoming). I spent the summer of 2014 in Norway, where the intensely long summer days over the fjord infiltrated my body.” Aerial Concave Without Cloud is very much composed as a book of observation, examining just as much ways of seeing as what might be seen, and the impact of different elements and angles of light, as well as the evolution and impact of time. “In gray light and wind,” she writes, as part of the second section, “the inconstant quarreling turn of it over absent walls. / Then a sudden sleet, shifting. Am I alone. // The pressure of it—the atmosphere here is an intensity of small children, / their insistence.” Or, as the sequence “a pale saturation (in day,” set as the opener of the second section, asks:

What do you wish to forget?

Becoming attuned to the monaural surround drives you to dehisce into the artic pale above, mirrored in a traceless horizon. This space “of blue” eats up the limits of the human body—my organs coalesce instead as a slow pulse of asymmetrical gray light.

In deep saturation and swarm, in this ultramarine aeriality. What storm.

Breathe lightly across my face. My cheeks are already languid floes across my features. Peer into me with the warmest winter ice I have never touched.

The third section of the collection is the expansive “Relinquish the Sky,” a section that incorporates photographs and dance, offering the centre of what the press release suggests: “Aerial Concave Without Cloud is a collection of poetry steeped in the bluest apocalypse light of solar collapse and the pale, ghostly light of personal devastation and grief. Through a combination of academic research and the salp’uri dance form, Sueyeun Juliette Lee channels and interprets the language of starlight through her body into poetic form. Through deep conversation with this primary element, Lee discovers that resilience is not an attitude or posture, but a way of listening.” This section focuses beyond the movement of light and space to include the body, offering forms of dance and conversations around resistance, ghosts, posture, loss and ancestors. “I began my inquiry into light,” she writes, as part of “Daylight, No Grief,” the opening poem of the third section, “simply: can I decipher a similar capacity to translate and speak the light with my living human body?” She writes of resistance, and the orphan, resisting, as well, the very notion of the orphan, disconnected completely from that of the mother, as offered through North Korean propaganda: the revolutionary-as-orphan, the simultaneous broken link in the chain of both family and history. “To speak with light is to encounter the trace of the originating mother body through its lost child. An orphan being, the light reaching us is jettisoned without turning its head back home.” What does the light bring, she asks, and what might it reveal? And what might it take with it once it finally leaves? The light she depicts and shapes is complex, revealing and, at times, dark. Or, as the poem “Northern Light” begins:

From 2015-2016, I traveled in sub-arctic and arctic coastal environments in order to observe strong variations and durations of light. I traveled in the fjords of Norway, into the arctic circle, and meditated alone in the howling blue-white expanse of Iceland’s northwest fjords and frozen plains.

I was anonymous and alone, among kind but ultimately indifferent strangers. I often spoke to and saw nobody for days.

Our bodies require light.
I seek the opening of understanding.

What is being said and said again with me. What am I now saying, too. If my skin were composed of eyes, what would it see. If my body were a gigantic listening drum, what would I perceive. What do they want to pour into me.